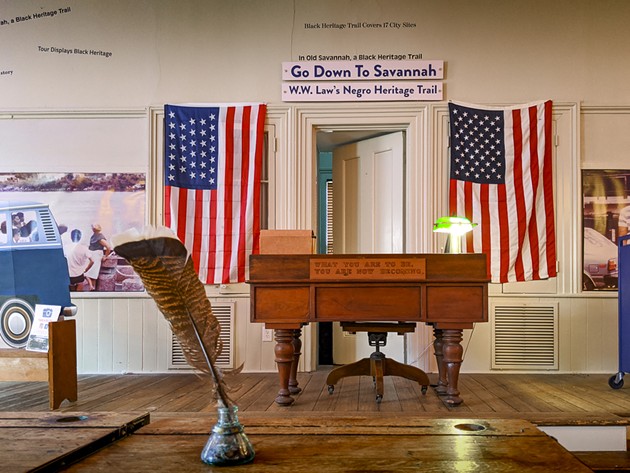 Courtesy of the Massie Heritage Center
A scene from the ‘Revisiting W.W. Law’s Negro Heritage Trail’ on view at Savannah's Massie Heritage Center.
Authentic Savannah grey-brick buildings, centuries-old oaks, and implanted Georgia Historical Society markers adorn trails that highlight varied tales of Savannah’s extensive history. This month, the Massie Heritage Center partnered with the Savannah Municipal Archives to highlight another trail showcasing often-overlooked Black history in the Hostess City: the new Revisiting W.W. Law’s Negro Heritage Trail combined exhibit and walking tour. The initiative revives the historical walking tour created by Savannah native W.W. Law (1923-2002) – a local icon of the civil-rights movement as a historian, teacher, and preservationist – to honor the community’s important African Americans. The journey begins in an old classroom within Savannah’s Massie Heritage Center, which was one of the city’s first schools to educate newly freed Blacks after becoming a Freedmen’s Bureau school in 1865. The classroom holds an exhibit about Law including historic documents provided by the Savannah Municipal Archives. The archival documents include pictures of Law guiding groups on his walking tour, along with maps of his original trails, Law’s handwritten notes on a recreation of his desk, his vinyl record music collection, and more. Heritage Specialist Ayela Khuhro guides the experiences by beginning the walking trail inside of the exhibit room. Khuhro said that Law had many variations of the trail, but he would always include the Massie Heritage Center. According to the guide, Law would often go on to speak about the “Pioneers of Education” like seamstress and clandestine school founder Mother Matilda Beasley, and former First African Baptist Church Deacon James Simms, both of whom risked their lives to educate Southern Blacks prior to emancipation. Simms was whipped publicly in Savannah for running an underground school. Roughly 100 years after emancipation, Law led efforts to integrate Savannah’s high schools in 1963, picking outstanding Black students (known as the “Savannah Seven”) to begin attending classes with whites months before the federal Civil Rights Act was passed to end segregation across America in 1964. “They were the brightest, the smartest, the most profound students that Law hand-picked to attend the previously all-white school,” said Khuhro. The Massie Center sits nearby Calhoun Square, which is the first stop of the “Negro Heritage Trail” tour after exiting the exhibit. Khuhro said that Law would often recount hidden legends, such as stories of Calhoun Square once being home to a pauper’s graveyard − but Law would have added that in fact it is Whitefield Square, found a couple blocks away from Calhoun Square, that was an actual graveyard for Blacks before their bodies were moved to Laurel Grove South Cemetery.
click to enlarge

Courtesy of the Massie Heritage Center
A scene from the ‘Revisiting W.W. Law’s Negro Heritage Trail’ on view at Savannah's Massie Heritage Center.
Next on the tour was Lafayette Square, named for the Marquis de Lafayette, the French nobleman who fought under George Washington in the American Revolutionary War. The house of Andrew Low, who inherited his family’s cotton business and treated the enslaved like family, sits on Lafayette Square. Juliette Gordon Low, founder of the Girl Scouts, was Andrew Low’s daughter-in-law, and according to Khuhro she hieed Morisana Millage − a formerly enslaved woman who cooked and lived in the basement of the Andrew Low House − as her personal chef. From Lafayette Square, the tour continues down Macon Street to Madison Square, which was named for Founding Father and former President James Madison. On the northwest corner of Madison Square is the Green-Meldrim House, where Union General William Sherman spent 41 days after his “March to the Sea” in 1864. After Khurho recounted the well-known tale about the Union general burning Confederate resources from Atlanta to the outskirts of Savannah, she said that Sherman later met with pastors who served as leaders in Savannah’s African-American community during that time to discuss the best ways for the newly emancipated to fairly integrate into society. It was decided that they should each receive 40 acres of land and a mule to work the soil, since the formerly enslaved were already skilled at working with land. Sherman ordered this land-allotment plan to be carried out, but after President Abraham Lincoln was assassinated, Vice-President Andrew Johnson assumed the presidency and repealed Sherman’s order guaranteeing the formerly enslaved their “40 Acres and a Mule.” Khuhro says that Law would have challenged his tour participants to imagine what life might be like for Blacks in America had the order never been repealed. “These are the kinds of stories W.W. Law would have told during his tour,” said Khurho. The Revisiting W.W. Law’s Negro Heritage Trail exhibit and tour continues at the Massie Heritage Center (207 E. Gordon St., Savannah) through March 8, with the tour beginning at 2 p.m. every Monday through Friday. A $10 admission fee grants access to both the exhibit and the walking tour. Visit massieschool.com for more details.