A review: 'Snow White and the Huntsman' 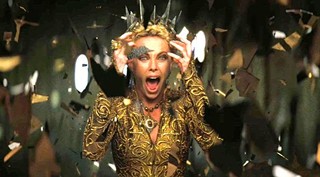 SNOW WHITE AND THE HUNTSMAN

Let's get the obvious out of the way: Snow White and the Huntsman, the year's second big-screen outing centered around a forlorn princess, a wicked queen and a magnificent seven, is infinitely superior to Mirror Mirror, which proved to be about as appetizing as a worm-infested apple. If it isn't a complete success, that's because its ambitions are often thwarted by its execution.

Kristen Stewart embodies the most independent Snow White yet seen on film, and if she doesn't always seem comfortable in the role, she's certainly an improvement over Mirror Mirror's bland Lily Collins. Too busy to waste time washing the dwarves' dishes and waiting for her prince to come, she stands alongside all men (including Chris Hemsworth as the title huntsman) as they unite to bring down the fearsome, supernaturally endowed queen (Charlize Theron) who has usurped Snow's rightful claim to her kingdom.

An accomplished director of television commercials, Rupert Sanders makes his feature debut with this picture, and his vision, tag-teamed with those of production designer Dominic Watkins, thrice-Oscar-winning costumer Colleen Atwood and the CGI gang, results in a rich look for the film, with its expansive kingdoms and daunting forests. Unfortunately, the story ultimately becomes more Tolkien than Grimm, with extraneous additions and radical reworkings meant to assuage moviegoers weaned on the Peter Jackson trilogy.

Theron is excellent as the vicious ruler who, in a nice bit of unstated hypocrisy, rails against the tendency of men to suck the youth out of fair maidens before discarding them but then proceeds to do likewise in her own sorcerous way. She's a scary figure, a perfect counterpoint to Stewart's equal-opportunity Snow White.

What doesn't represent equal opportunity is the decision to cast name actors (Ian McShane, Bob Hoskins, etc.) as the dwarves and cut them down to size via visual effects. Mirror Mirror at least had the decency to cast real dwarves - with so few roles available to little people, the route taken by Snow White and the Huntsman is an unfortunate one, and really no different than if the makers of the recent hit Think Like a Man had decided to cast all the principal parts with white actors in blackface.