WHEN Charles Ellis first dreamed up an artists’ market, he was met with mixed reviews.

“I went to a friend of mine and was mentioning it, and she said, ‘Charlie, it won’t work. People are not going to come out,’” remembers Ellis. “I said, ‘Okay, I’m going to try it anyhow.’ We’ll prove her wrong.”

No disrespect to the friend, but Ellis is on to something here.

“I wanted Daffin Park at first,” says Ellis. “I went to the city and asked if I could hold it in the park, and they said, ‘Well, if you’re selling stuff, you can’t.’ I’m driving home and I drove by here, and I slammed on the brakes. I got out of the car and looked around, and I’m like, ‘I’m sure glad that Daffin Park said no.’”

In planning the event, Ellis recruited David Laughlin, local artist and co-host of WRUU’s “Art on the Air” program.

“David has been a big help,” says Ellis. “He knows the media; he works with the radio station.

“The quality of the people is cool,” says Laughlin. “He’s got sculptors, painters, photographers, all the types of artists.”

Over 50 artists are signed on to participate, and they represent a cross-section of Savannah’s art scene.

“I am just really amazed at how many people are coming,” Ellis shares. “Way back at the original start, I was talking to one of the arts association leaders, and he said, ‘What do you want from us?’ I said, ‘Enthusiasm.’ He said, ‘Well, okay.’”

Enthusiasm is precisely what Ellis got.

“I’ve got lots of enthusiasm, mostly from galleries like Leslie Lovell at Roots Up, and then individuals like Barbara Dukes who is a sculptor, and Susie Chisholm, who got a lot of people from City Market,” explains Ellis. “Then Brigitte van Balen, who puts on the Isle of Hope art show, was very helpful. So I’ve got a lot of help and I feel so good about it.”

In his search, Ellis went straight to the source for artists.

“I went to all three art associations—there’s Tybee, the Landings, and Savannah,” says Ellis. “I asked them all one question: Are there too many types of shows like this? Or too few? Or just the right amount? And they all said too few.”

Indeed, SLAM is one of, if not the, only event of its kind, size and scope in Savannah.

“I thought that we should have a poetry reading,” says Laughlin. “It’s part of the whole mix. One of the other things was for [WRUU] to be out here and for one hour, we wanted everyone to tune into the radio for that one hour of classical music on their phones.”

There will also be live music from Athens musician Caroline Aiken, who’s sung with Muddy Waters and Arlo Guthrie. 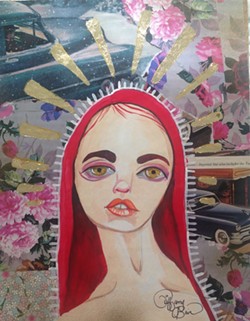 Ellis also got some artists inspired by Pasaquan, an art compound in Buena Vista, Georgia.

“It was this place built by Eddie Owens Martin, and he’s deceased now, but it’s wild and crazy,” explains Ellis. “These guys [that are coming] are influenced by Pasaquan, and they’re coming down here. With what, I don’t know—it’s top secret.”

Ellis is also an artist himself.

“He’s an outsider artist,” adds Laughlin. “I hate to label it, but he finds things and creates things.”

“I make art out of found items,” says Ellis. “I make driftwood fish. I like that because it represents the cycle—I find wood that’s driftwood and make a fish out of it, which cycles it back home. It’s something associated with the water.”

Now that the hard work is over, Ellis is excited for the big day.

“There are two things I have to do,” Ellis says. “One is getting the artists, so I can strike that off. Two is to get people to come out, so now I’m focusing on that. I’m just real happy at the way it’s turning out.” 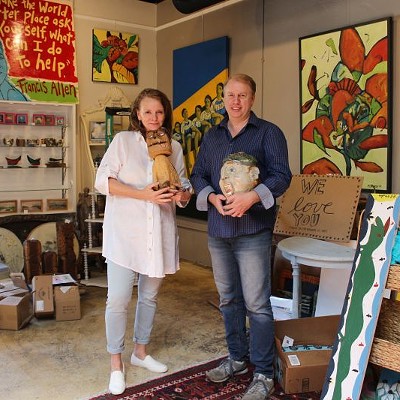 A grand SLAM of a day