"Spectrum" is on view through July 18 at Sulfur Studios at 2301 Bull St. Private viewings are available by emailing info@sulfurstudios.org, and the curator's talk will take place on Instagram Live, @sulfurstudios, at 2 p.m. on July 18. Artwork is always available for viewing or purchase at their website, sulfurstudios.org.

I FEEL AS though I’ve written some variation of the words "the pandemic changed everything" at least a hundred times since March.

Forgive me for beleaguering the point, but the COVID-19 pandemic has changed everything.

From restaurants and school to air travel and toilet paper supply, the pandemic has left its indelible mark on many facets of life. Savannah’s art scene is just one of many.

The Jinx has been a bastion of culture on Congress Street since the 1990s. While we wait eagerly for it to reopen in its new location, we’re down an important midsize music venue that could pull anyone from a small local band to an international touring act, and anyone in between.

The Studio School, run in this iteration by my friend Tatiana von Tauber, was more than just an art school. For five years, it was a community of art lovers that learned from and supported each other.

Of course, these are not the first establishments to close as a result of coronavirus, and they sadly won’t be the last. But these two provided very unique offerings to our city and to our cultural landscape, and without them, there’s a little less good happening. 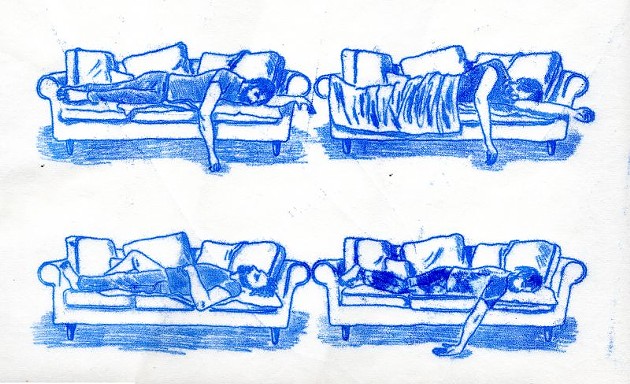 "Portrait of the Artist" by Jordan Fitch Mooney.

I say all that to say this: if you’re sad about these closures, make a concerted effort to support what’s still here.

Between the pandemic and the already tenuous nature of the art business, our art scene could look a whole lot different by this time next year. It already looks a lot different in the nine years I’ve been here. Change is inevitable, but accelerated in moments like this.

Now is the time to support galleries and artists that you love, and Sulfur Studios could certainly use that support.

For years, Sulfur has been a powerhouse in our artistic community. The Starland location offers both a gallery and artist studios, and Sulfur also places art in other local businesses through Sulfur Art Services.

All of those efforts have been severely stifled after the pandemic.

“Things are definitely shaky, and we’re just going month by month,” says Jennifer Moss, Sulfur’s studio and exhibition coordinator. “We’ve gotten a lot of support, which has been amazing, from people purchasing art and donating which has really helped us get through the past couple months, for sure. But as time goes on, a lot of our artists are struggling. A lot of people’s work has dried up or they’re just unsure, and so we have lost studio renters.”

Moss explains that the studios are largely what help pay for everything else, so those spaces sitting empty are definitely the weakest link.

So, Sulfur has gotten creative to help strengthen the other links. They’ve begun a postcard project, a monthly set of five postcards featuring different Savannah artists.

“It’s the idea that you can support us, support a local artist, keep in touch with friends, support the post office—all of that,” says Moss.

They also have a general fund that replaces the studio rent they’re losing, so direct donations are always accepted. But right now, the best way to support Sulfur Studios is a way that might be familiar: going to a show.

“Spectrum,” Sulfur’s annual member exhibition, is one of the first exhibitions with art available to see in person since mid-March. Up to 10 people can enter the gallery to view the work at a time. Moss notes that outside of receptions, they’ve rarely, if ever, had ten people in the gallery at a time.

Speaking of the reception, that will fall by the wayside this time. Instead, Sulfur will host a Q&A on Instagram Live on July 18, the last day of the exhibition.

For “Spectrum,” members were invited to submit monochromatic works that used any of the seven colors on the spectrum. They were encouraged to consider deeper connotations of the color, like the cultural or philosophical meaning, in their work. In the gallery, the work will be displayed in the order of the spectrum, from red to violet. 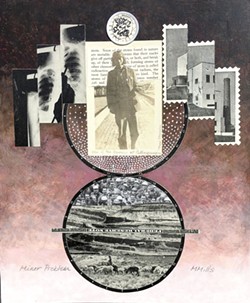 The idea to incorporate the color element came from “Chroma,” their five-year anniversary show that happened in February.

“We were all kind of sitting around and someone said the idea of, ‘What if it was monochromatic in spectrum order?’” remembers Moss. “The idea just came to us, so that’s what we ended up doing.”

“Spectrum” was not a juried show, but the Sulfur team worked with artists to balance the colors so they didn’t end up with a mismatched rainbow. Artists were able to choose the colors they wanted, and they were also able to either create new work or submit work they already had.

The exhibition is a nice return to some semblance of normal, even if it’s not quite all the way normal yet.

“It was good to put up a show,” says Moss. “I’ve been [at Sulfur] working in my own personal space off and on through the whole time. It was nice to be able to stretch those curatorial muscles and play the layout and put up the show.”

The resumption of in-person exhibitions feels like a welcome step in the right direction. More importantly, it’s a way to continue supporting Sulfur Studios and its talented artists.

Even if you’re unable to buy art, coming out to see the work in the gallery is a way to show encouragement and support for people who need it quite a lot right now.