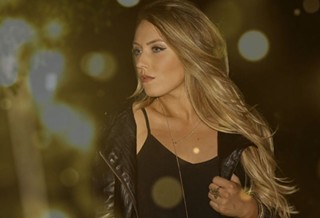 WHEN she was just 14 years old, Chloë Agnew joined one of the most successful musical groups in history.

Since its creation in 2004, the Irish musical ensemble Celtic Woman has been named Billboard World Album Artist of the Year six times and has sold over nine million records worldwide. Agnew bloomed professionally in the group, touring the world and sharing her Irish heritage and tradition with countless fans.

In 2013, Agnew was inspired to embark on a solo career. Having just been named Female Vocalist of the Year at the Irish Music Awards, Agnew proved she has the seasoned chops and warm spirit to capture an audience all on her own. She’ll bring her solo show, “Chloë Agnew and A St. Patrick’s Day Celebration,”t to Tybee Post Theater this weekend. Accompanied by Irish tenor Dermot Kiernan, Agnew will share Irish folk songs, singalongs, pops, old standards, and more.

We spoke to Agnew about the bold decision to blaze her own trail, her songwriting pursuits, and how the Irish really celebrate St. Patrick’s Day.

Is this your busiest time of year?

Once we get to March in America, the Irish go to work! [Laughs] I'm looking forward to it. We've got a busy couple of weeks ahead. When March comes around, you find yourself singing "Danny Boy" somewhere.

How is the way America celebrates St. Patrick's Day differ from the way you grew up with it in Ireland?

It's funny to see how Saint Patrick's Day in Ireland has changed. It's still primarily a holy day—people get the day off work, spend some time with family—but the rest of the world dyes the rivers green and has green beer. The parade is the main thing in Ireland, and most cities have a big parade with marching bands and floats from all over the world.

I've noticed over the years there are more people traveling to Ireland to celebrate. There's a great interest in St. Patrick's Day all over the world. It's great, it's a fun day in Ireland, and it goes without saying that it involves a lot of drinking!

You decided to take on a solo career in 2013—how did you make that decision?

I moved on from Celtic Woman, and I was one of the originals—I was the baby of the group! For me, it was almost 10 years with the group and I felt like I'd given as much to the group and gotten as much. I saw the show change, and I was the last original vocalist. I felt like the show that I had been a part of and knew and loved had changed. Everyone was going on to do their own solo thing, and I kind of wanted that. It was funny—when I stopped, I didn't realize it was the first time in 10 years I had actually stopped. I actually needed time to take to figure out what's next.

One thing in Celtic Woman, we have a great fan base of people all over the country who wanted to see what I was doing on my own. I developed a show of my own, and the one thing about it is it’s a totally different world! You’re used to being involved in this massive machine—on your own, it’s a lot more work. There really is something so rewarding, and I’m so fulfilled.

How did you develop your original show?

The thing for me with Celtic Woman...it didn’t matter where we’d go all over the world, but particularly in America, so many people either have a connection or love the connection with Ireland. They’re so connected to their ancestry, their history. All the songs, they’re written about love and loss, home, hope...I think they’re all things that people can really relate to and identify with.

In Ireland, part of our culture in Gaelic is a thing called seanchaí, a word for storyteller. That’s a big part of our culture—old Irish tales passed down generation to generation. I take that into my show now. I love the music I’ve chosen, and I love that they have great stories behind them.

It’s not just Irish music—I put some classic, well-loved songs that people love, international songs that have a great story. I love doing that. I choose a range of music that I love singing. Getting the freedom to pick your own set list and music that comes from a really genuine place...it’s a bit of fun. The songs we choose have these themes to them, and that’s the great thing about Irish music: There are great drinking songs, upbeat songs. We choose a set list that allows the whole family to come along.

And we’ll be hearing some duets, too.

Yes, I have a wonderful partner with me, Dermot Kiernan, he is a wonderful Irish tenor, and my band. He plays a whole load of instruments. We’ll be doing a couple together, one that I’ve written and some Irish ones. We’ve known each other a long time and have great history and chemistry.

How long have you been writing your own songs?

I’ve always been writing poetry from a young page—my parents were in the music industry—but I never focused on it. It was when I moved on from [Celtic Woman] that I was looking for some new connection with music. I needed to find something that felt real to me, and the only way to do that was songwriting. It’s been something that’s a craft that I will forever master.

I really focused a lot last year on working with other creative people and learning from other great songwriters. In the process, I’ve learned so much about myself and fallen in love with music more than ever. Creating something that’s your own, there’s no better feeling, really. It’s a great sense of achievement. Songwriting is quite a personal sacred space that you share...I really love it. It’s been a part of this whole new journey for me.

What are you plans after St. Patrick’s Day season?

Probably sleep for a week! Then we’re kind of busy up until April. I spent a lot of time last year writing a new EP, so I’ll have five tracks—four originals and a cover—I recorded. I’m really excited about the new songs and the new journey. It’s a new step for me in my focus with that is to get them released. I just want to keep growing. People have known me from Celtic Woman for such a long time, this new time in life is important for me to focus on establishing what I do on my own.