'A subtle and entertaining thing' 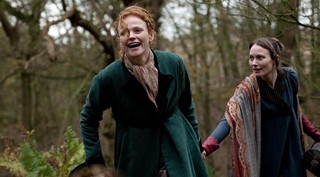 To select the films for this year’s Savannah Gay and Lesbian Film Society Festival, director Deb Riney traveled to San Francisco in June, for the annual two–week Frameline Festival.

Frameline is the biggest LGBT media fest in the world. Over 10 days, Riney watched more than 100 films. And she brought back what she calls “the best of the best.”

The SGLFS festival runs Friday through Sunday, Oct. 15–17, at the Jepson Center for the Arts.

The festival, Riney says, has the same mission as the group’s monthly film screenings. “Our intent and focus is to organize and manage year–round cinema that supports and strengthens LGBT visibility through the media arts,” she explains. “It gives the community – the overall community – access to see films and videos that provide entertainment and also deal with a wide variety of issues related to sexuality and gender.”

“They wouldn’t play in Savannah if we didn’t bring them in,” Riney says.

She’s particularly excited about the short films on the menu, including The New Tenants, which won the Academy Award last spring for Best Live Action Short Film.

She sees her festival as an opportunity for the gay and straight communities to enjoy creativity on the same level.
“There’s so many negative things out there in societal culture about LGBT,” Riney says. “Some people are so firm in their ‘Oh, no, it’s gay, lesbian! Those people are so blah, blah, blah.’

“I’m not one to say you need to beat somebody over the head with a placard, or corner them on ‘Why aren’t you open to respecting my rights,’ this and that,” she says.

“Whereas in screening a film that’s a neutral, entertaining kind of space, it might cause someone to look at something in a different way. It’s a subtle and entertaining thing, and maybe they open their mind just a little bit.”

The Secret Diaries of Miss Anne Lister. “I love and only love the fairer sex and thus beloved by them in turn, my heart revolts from any love but theirs.” Thus wrote wealthy British landowner Anne Lister in 1820. This BBC dramatization is based on the detailed journals (some four million words) Lister kept — the behind–closed–doors bits written in a code not deciphered until the 1980s. The plot centers on Lister’s all–consuming love for Mariana Belcombe (Anna Madeley), who’s married to a man. When the film aired last spring, veteran actress Maxine Peake earned rave reviews for her portrayal of Lister. Peake, said the Daily Telegraph, “is an extraordinary actress – both intensely human in her vulnerability and intensely disquieting.” Oct. 15, 7:30 p.m.

The Topp Twins: Untouchable Girls. Jools and Lynda Topp are Kiwi comedians – they’re openly gay sisters from Huntly, New Zealand, and they also happen to be one of the country’s most popular performers — they play acoustic guitars and sing, they yodel and their standup is very, very funny (think Benny Hill meets the Indigo Girls). This documentary film, directed by Leanne Pooley, broke New Zealand attendance records when it premiered in the spring of 2009.Oct. 16, 11 a.m.

Riney’s pick is Dyke Dollar. “That’s a really well–written, well–scripted film,” she explains. “It’s based on the fact that in the 1990s gay activists began stamping their dollars to prove that they contributed to the American economy. Laura Terruso, who directed, based the story on one of those dollars. And it’s a riot. It’s hugely funny and right on.”

Undertow: Peruvian writer/director Javier Fuentes–Leon’s supernatural fantasy is a gay, seaside variation on Demi Moore’s Ghost; Miguel, a fisherman with a pregnant wife, has an affair with the artist Santiago. The latter — who’s looked down upon by the villagers as a rather effeminate “outsider” — drowns, and his spirit comes back to haunt Miguel, imploring him to acknowledge their love and declare himself to the village. Oct. 16, 4:45 p.m.

Deb Riney: “I didn’t even realize how many awards Undertow has taken up to this date. Some of the best Latin American actors play in it. It’s just beautifully done, on so many levels. It really is part Brokeback Mountain and part Ghost. That’s a perfect description for it.”

Baby Jane: Billy Clift wrote and directed this all–drag horror comedy, a take–off on the cult classic Whatever Happened to Baby Jane? This time, instead of Bette Davis and Joan Crawford, we get Matthew Martin and J. Conrad Frank as those weirdo sisters in frilly dresses and wigs, hammily one–upping each other in glorious black and white. As if that weren’t enough, the character of Elvira is played by an actor named Alotta Boutee, formerly of Harlem Shake Burlesque. Oct. 17, 7:30 p.m.

“Billy Clift,” says Riney, “is over the top. He is one of the cleverest, most creative people I’ve run into over the years. It has references to Bette Davis and Joan Crawford’s other films. You have to pay attention — it moves rather quickly. There’s all kinds of little parodies, yet it still maintains all the stuff that the original had – like the bird and the doll and the chocolates. And the guys that play the roles are dead ringers. It’s so good.”

Festival pass (all films and receptions): $61

Friday screening plus Club One reception: $21