A tale of two site plans

Separated by 500 feet, these two blocks illustrate the challenges and frustrations of city planning in Savannah

APOLOGIES if I triggered any middle school summer reading flashbacks, but the allusion really is appropriate to the subjects, though they aren’t in two different cities.

Yes, the two separate block-sized site plans — one a response to increased development pressure, the other the proposed site of the new Central Precinct headquarters — are both here in Savannah.

Not only that, they adjoin the same street, less than 500 feet apart (see Figure One), which makes their juxtaposition extra delicious.

Figure One: The two sites in context

It’s an interesting exercise to compare and contrast the two.

Site One is the block bounded by Anderson, 31st, Montgomery, and Jefferson (see Figure Two) where a developer has managed to assemble all of the parcels therein.

While the zoning is very interesting to someone like me, fear not, I am leaving that aspect behind.

Our zoning is a mess. I’ve said it. You know it. This is simply one more exhibit. Lawyers will deal with it.

A combined neighborhood association meeting was held last week so that Christian Sottile and Anthony Cissell could present some very preliminary urban design concepts for Site One.

Both went to great lengths to emphasize that neither a true development plan, nor architectural plans had yet been made—just a “Conceptual Master Plan.”

They were so shy of anything being taken the wrong way, or being seen as set in stone, that they denied me the use of any presentation materials for this column.

However, I did not promise not to create my own visualizations (see Figure Three).

Forgive me—I do it out of love and praise.

Figure Three: The author's rendering of the Site One conceptual buildout.

On the eastern half of the block, embedded as it is in the traditional residential fabric of Savannah, I dare say that no one should have any problems with what is conceptualized.

Three existing two-story structures will be restored and kept in place, while a fourth one-story cottage will be moved a bit to join them. Then, a row of attached townhomes will be built facing those that already exist on the east side of Jefferson.

Sottile stated, “When something is intact, work with the pattern that is there,” and that is exactly what this half of the concept does, fitting itself into what exists like a Tetris block.

But on the opposite side, facing Montgomery, the traditional pattern has been obliterated by the injection of auto-oriented commercial uses that sprang up after the designation of U.S. Route 17 through the city.

There are no street trees. There are no pleasant, continuous sidewalks. There is a lot of room for parking.

Here Sottile asks, “What should the next pattern be?”

So, the western half of the block is imagined a little differently. The concept calls for a pair of multi-family and perhaps mixed-use (retail on the street) buildings facing Montgomery, perhaps conjoined above the block’s bisecting lane.

These are envisioned as being three or four stories tall, wrapping around the corners. Scores of rental units could be placed here, all hiding surface parking within the block.

Sidewalks and street trees would be restored. Multiple entrances to ground-level interiors will perforate the façade.

The Montgomery Street corridor is currently a case study of how everything about a traditional development pattern dissolves when the automobile is prioritized. However, this site can instead become a case study in how to repair the urban fabric where the context has been lost.

But then, just down the street, barely over a block, is a case study in how to impede the repair of such an auto-oriented corridor. This is Site Two, the proposed location of the City’s new Central Precinct building.

It is 500 feet to the south, between MLK and Montgomery, on the land between and on either sides of West 33rd and West 34th Streets (Figure Four).

Here I must make a disclosure. I sit on the board of the Thomas Square Historic District Neighborhood Association. We sent a letter about the site plan of the new Central Precinct building to the Mayor, City Council, City Manager, etc.

I wrote this letter and made the graphics that went with it, but it was all approved by the board. However, nothing I’ve written in this column is board-approved. It’s just my own thoughts and opinions.

The current plan has been not so much designed as just plopped down in the middle of the property. It does not address a street.

Instead, blank walls and nothingness face the street, and pedestrians passing on the sidewalks. The building addresses an interior parking lot. Then there’s another parking lot behind it. It is sandwiched between parking lots.

It looks like a bank branch built on an outparcel at the mall, except it is in the middle of a traditional neighborhood.

It is another suburban, auto-oriented intrusion that will impede progress in repairing the surrounding fabric perhaps for decades.

And the City isn’t even sure that this site will be of use to them for more than five years, due to proposed consolidation plans (SMN 05.15.2017 “Savannah mayor: Revised police station looks like ‘prison’”).

As one city official said anonymously: “It’s a pile of dogshit.”

The neighborhood board knew that asking the City for a complete redesign would be impractical. So what we asked for was very simple: just turn the building 90 degrees and bring it to the property line.

This way it would at least address a street and sidewalk, and not obstruct future redevelopment of the site by sitting right in the middle of it (see Figure Five). 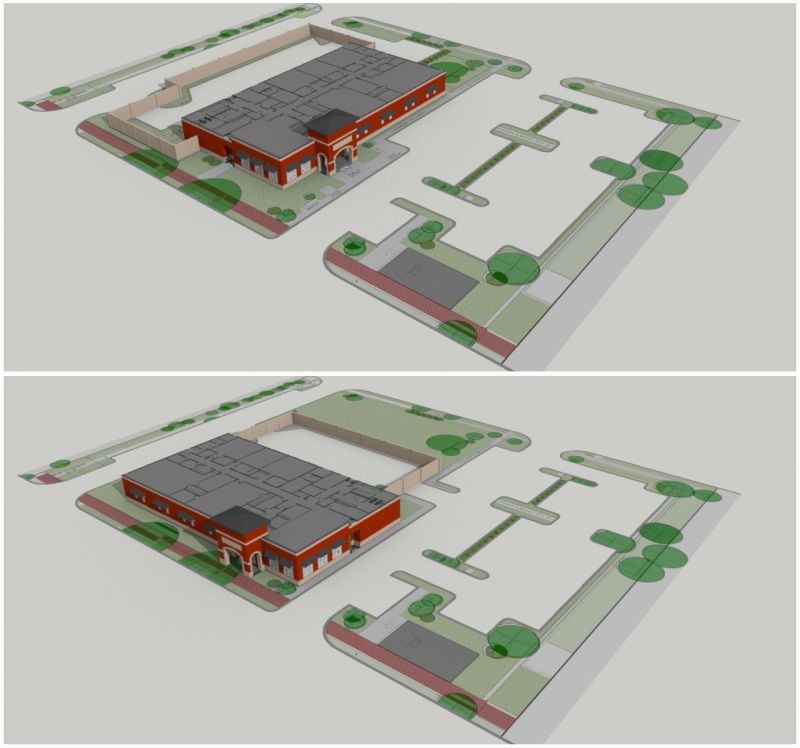 Nope. The City can’t do even that—it might cost a little extra to connect the utilities and draw the new configuration of parking spaces.

If you’ve heard the expression “Stepping over dollars to pick up dimes,” this is its illustration. Because the monetary value of the benefits of this small change don’t show up in an Excel column, right now, the City will not pursue it.

A progressive developer, the type that hires the likes of Christian Sottile and Anthony Cissell, will incur extra costs when trying to figure out what to do with such a site without just scraping it clean and starting over.

However, I do know a tenant that will be able to use this site easily, after removing interior walls:

So let’s review what can be learned from this compare/contrast exercise:

Fully utilizes the site. Re-creates the street-wall on all sides. Engages at the sidewalk zone. Repairs the urban fabric, encourages more redevelopment nearby.

Wastes oodles of space. Sits amidst the site like a toad on a lily pad. Disengaged from streets and sidewalks. Obstructs future development and neighborhood repair.

Though it was on my mind throughout their presentation, I did not ask Christian Sottile and Anthony Cissell what they might think of the City’s Central Precinct plan. It would be highly impolitic for them to comment (honestly, that is).

But I didn’t need to ask. One needs only look at their own site concept, and listen to their own words about the thinking underlying the concept, to know what they probably won’t say.