ON A scorching Saturday, my husband and I decided to pop into the Savannah Seafood Shack, nestled tightly among the hustle and bustle of Savannah’s liveliest roadway. Upon arrival, we saw onlookers peering into the windows at expert craftsmen fashioning rolls of frozen cream. 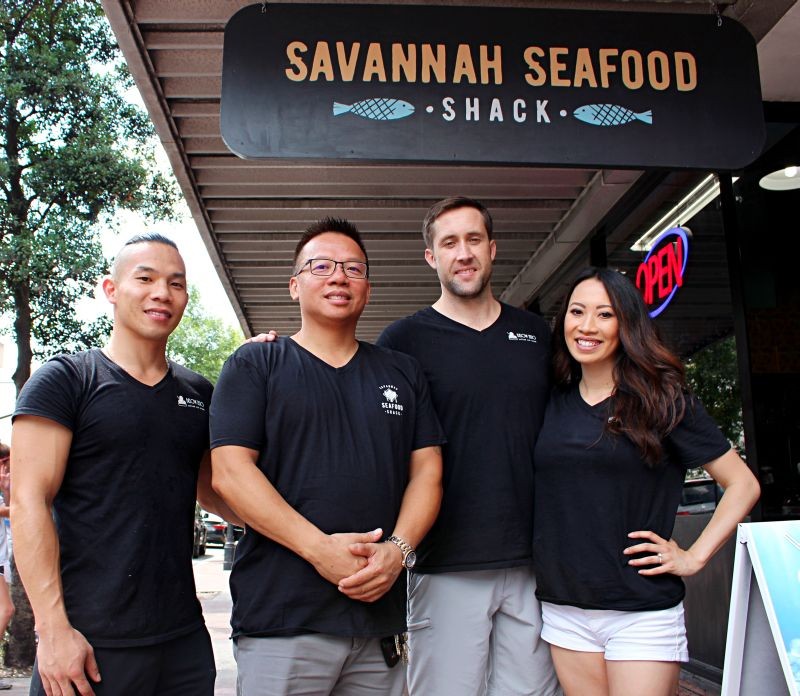 Owners and partners, including husband and wife duo, Christine and David Cutlip, as well as her father Timmy Tsoi and brother Jonathan Tsoi (right to left) can be seen, on any given day, sculpting ice cream, waiting tables and delivering food to local businesses themselves. “We want people to see our faces and know that we care”

A bubbly woman was ushering them inside, “Come in! Have you tried rolled ice cream before?” This high-spirited woman turned out to be Christine Cutlip, an owner and partner of this establishment.

Broughton Street, one of the most desired locations for restaurateurs and shop owners, welcomed the Savannah Seafood Shack and Below Zero Rolled Ice Cream, which opened their doors on July 11. However, only one rectangular hole-in-the-wall space houses both new attractions.

The unifying factor that ties the two concepts into one establishment is husband and wife duo, David and Christine Cutlip, as well as her father Timmy Tsoi and brother Jonathan Tsoi.

“This is a family affair,” Christine boasts as she glances at her husband, father and brother actively serving customers from behind the counter.

The Cutlips and the Tsois may be new to the downtown Savannah food scene, but as previous owners of the successful Splendid Shabu, Savannah and Pooler’s first ever “hot pot” restaurant, they know a thing or two about running a lucrative restaurant.

With laser focus on their new venture, the family decided to sell their beloved hot pot bar in order to dedicate all their time and energy into the Savannah Seafood Shack and Below Zero Rolled Ice Cream.

Former account manager Christine and David, previously a microbiologist for Nestlé, left the world of corporate America to pursue their passion of “bringing new things to Savannah.” With first the hot pot eatery and now their rolled ice cream, the entrepreneurial Cutlips and Tsois live by one rule when it comes to unearthing good food: “If you want it, you have to start it (yourself).”

With such a strong dichotomy between the two concepts, one could not help but ask, why seafood and ice cream?

However, last year, on their honeymoon in Thailand, Christine and David experienced rolled ice cream from a Thai street vendor and were enlightened.

“Seafood is our first baby, and our second child is Below Zero Rolled Ice Cream, which has turned out to be our star child,” Christine gushes.

From the sweltering sidewalks of Broughton, the rolled ice cream artisans of Below Zero wield their spatulas like hibachi grill masters, captivate passer-byers. As they peer into the wide-open windows, noses pressed against the glass and sweat on their brow, ice cream is now on their mind.

Rolled ice cream, or stir-fry ice cream, originated in Thailand very recently and can only be found in a handful of places in New York City, Atlanta and now, Savannah.

With custom-made equipment, the entrancing process of rolling ice cream is part showmanship and part skillfulness. After practicing in their garage for a couple of months, the Tsoi’s and Cutlip’s learned the delicate balance between achieving a temperature well below zero and maintaining a consistency that is malleable.

“Each cup of ice cream is freshly made from scratch,” Cutlip reveals. They start off with fresh cream, made in house, pouring it onto a flat metal surface that is set well below 0°F. Flavors chosen from a diverse menu, like Matcha Green Tea or Oreos, are blended elegantly with two spatulas.

“It is almost like hibachi, the way they fold it, mix it, and chop it,” Cutlip illustrates.

After this, the flavored cream is spread into a thin layer, until it reaches the precise temperature, where it is then gracefully rolled into rosebud shaped tubes. Each spiraled cylinder is delicately placed into a deep round bowl and adorned with freshly cut fruits, sweets and drizzles.

With “no artificial flavors, preservatives or stabilizers,” each edible bouquet of rolled ice cream offers a cutting-edge taste of Thailand.

Since the main goal of the Savannah Seafood Shack was to reinvent the seafood experience, Cutlip sought to make their fare affordable and impressive, without having to compromise on quality. Using their connections in seafood, the owners of the Savannah Seafood Shack were able to provide wholesale prices in a restaurant environment. Consequently, this fast casual seafood restaurant offers high quality products at seafood market prices.

For this reason, on a weekday, one can order their popular Low Country Boil, with peel and eat shrimp, plump corn, premium beef sausage and seasoned red potatoes, for a mere $7.50 from the lunch menu. They pride themselves in serving fresh, made to order, seafood.

“We don’t dump frozen (seafood) into a fryer,” Cutlip divulges. It bears repeating, quality is their goal.

From the walk-up counter, to the hand-made wooden tables and benches lining the wall, this eatery exudes a laidback atmosphere that emulates Cutlip’s business model: great food at low prices, and fast. While the Cutlip and Tsoi family do not compromise on the superiority of their ingredients, they seek to cut costs in other ways, such as forgoing wait staff.

In fact, the family can be seen on any given day sculpting ice cream, waiting tables and delivering food to local businesses themselves. “We want people to see our faces and know that we care”.

This maritime-themed joint, with wooden planked walls studded in nautical paintings, was full of families, either standing at the ice cream counter or sitting at the wooden tables. Although my plan was to have an early dinner followed by dessert, the Savannah sun and Christine’s enthusiasm persuaded me to start with the sweet course.

I was enchanted as I watched the Tsoi and Cutlip boys, bent over three individual cold plates, concentrating on the artful process of ice cream rolling. Ice cream choices ranged from the Georgia Peach to the Perfect Matcha, but the Savannah Bananas caught my eye. Paying homage to our local baseball team, this creamy treat was infused with Nutella, bananas and vanilla wafers, topped with fresh fruit and chocolate sauce.

Like art melting in a cup, people all over the restaurant, like me, were photographing this unique Thai-inspired treat. 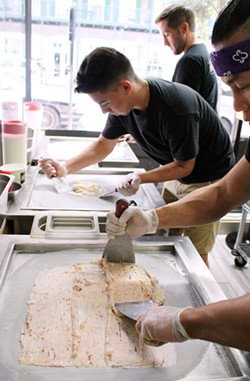 Our seafood experience was just as charming. My husband put in our order at the counter and sat down, as we waited only a few minutes for our hot food.

First we tried Savannah’s one and only, Seafood Cone. A subtly sweet homemade soft waffle cone functions as a vehicle to hold crunchy house made coleslaw and nuggets of freshly fried seafood, lightly battered calamari in our case, showered with creamy shrimp sauce.

As a hybrid of the walking taco and an ice cream cone, this menu item serves as a playful to-go option for the hustling customer.

Then the Shrimp Po’ Boy, served on garlic buttered French bread, came beckoning. This oversized sandwich, with succulent hand-battered shrimp, doused in thick mayonnaise and rich shrimp sauce, and topped with lettuce and tomato, pampered our taste buds. The small oval shaped hushpuppies, that accompanied this hoagie, only enhanced the southern appeal.

All too often a sandwich such as this is dripping with the oil from the fryer, making for a heavy meal. However, like the calamari, my husband and I were impressed with how the delicate taste of the shrimp shone through the light crust.

After this, we indulged in the famous Low Country Boil, which was served in a tied plastic bag, ready to burst from the steam. Shell-on shrimp, juicy corn on the cob, smoky beef sausage and hearty red potatoes were bathed in garlic butter and house made Cajun seasoning, setting it apart from the common Old Bay flavoring.

Lastly, we ended with a starter menu item, the savory crab pie. The pie’s decadent filling, teeming with blue crab and speckled with red pepper, was held together with melted Swiss cheese and served on a flaky crust.

The Savannah Seafood Shack and Below Zero Rolled Ice Cream may be the new kids on the block, but their premium ingredients, customer service and affordable pricing make them a worthy contender among the restaurant giants of the Historic District.

Whether you are drawn in by the curb appeal of ice cream made from scratch before your eyes or have a hankering for high-quality fresh seafood that won’t break your bank, the Savannah Seafood Shack and Below Zero Rolled Ice cream have got your cravings covered.

Some Spendid Shabu Shabu at this Hot-Pot hotspot