AFTER 2018’s gubernatorial election, which saw allegations of voter suppression and manipulation, Georgia’s elections have been in the national spotlight.

For the 2020 election season, the state unveiled new voting machines with touch screens and a printer component that would ostensibly help ease voter manipulation concerns.

Last Tuesday’s election combined the general primary and the presidential preference primary and was the first day the new voting machines were used on such a large scale. How did it go?

“Tuesday was a tragedy, through and through,” says Aklima Khondoker, the Georgia state director for All Voting is Local, an organization that seeks to remove voting barriers. “It was the most tragic election that I’ve ever witnessed.”

What made this day such a disaster?

One of the biggest issues on Election Day was long lines. Lots of people in Savannah reported hourlong wait times to vote, often standing in the hot sun.

One reason for that snarl was extensive issues with the new machines.

Some early voters reported no issues with the new machines, and so did some voters on Election Day itself. But not every precinct was so lucky.

“I stood in this hot gym—95 degrees at least, and fans all the way across the gym—for 45 minutes,” she wrote. “A computer went down, one of the four that they had, and they got it ‘fixed.’ I got this computer. In the middle of my vote, they cut the breaker and my machine went down and the lights went out. It took them 10-15 minutes to get it back running, and they wouldn’t let me go to a different machine. The lights were still out when I left and [it was] only getting hotter in there.”

Michael Riccio estimates he was at the same polling place about an hour before Braddy.

“While I was there, two computers stopped working and one of the computers that did work had a printer jam that stalled a voter for about 10-15 minutes,” he wrote. “This means there was only one functioning computer at the time. Let me also note that Aldersgate usually has between eight to 12 computers. This time there were four.”

At first, Riccio wondered if the high cost prevented his polling place from putting out more machines, but then he notice that precincts in traditionally white neighborhoods had many more machines.

Riccio noted that people who vote at Aldersgate typically are zoned for Savannah High School.

The Poll Location Boundaries feature on the Chatham County Board of Elections is currently under construction, so we could not confirm the exact boundaries of the precinct.

Khondoker noticed similar disparities in Atlanta, where she was working on Election Day. Locations in Sandy Springs and Alpharetta, which are typically more affluent communities, had very short lines, if they had one at all.

“We know these are not predominantly black and brown communities. We understand those are very well-monied communities that can afford to uphold and carry out more successful elections because they have the budget to do it,” she says. “That is not an effective way to have accessible voting for all. It is a great way to make sure those in power continue to hold their power, while those who are powerless can never find their way into power.”

The disparity in ease of elections was also present in Chatham County. Polling places like Temple Mickve Israel and the Wilmington Island United Methodist Church were reportedly easy to get through.

The Jewish Educational Alliance received both positive and negative reviews that seemed to depend on the time of day.

Rachel Hinely got to the JEA around 7:30 a.m. and waited in line for two hours due to mechanical issues. But Amani Eissa voted at the JEA around 6 p.m. and reported a positive, quick experience.

Some people reported that poll workers at their locations were overwhelmed by the new system. Secretary of State Brad Raffensperger blamed the poll workers, according to Atlanta-based news site 11Alive.

“It gets back to training and employees. It’s not the machine. These machines have been used in other states,” Raffensperger said Tuesday. “What were they doing for all these months? Did they wake up and say let’s have an election on Tuesday?”

“You need to equip them with the right technological equipment for them to accommodate the power draw that these machines require, and they didn’t do that,” says Khondoker. “The Secretary of State’s office failed to send technological help in a timely fashion.”

Another issue Tuesday was precincts that were moved without notifying voters. Trina Brown showed up at her polling place on Tybee only to find the doors locked.

“I thought I was confused, and I went back home to look up my polling location on the voter page website. I was correct, and I drove back there,” she wrote. “Nobody around, no signs telling me where the new or primary polling location was.”

After finding out on a neighborhood page that voting was open on Tybee at two other locations, Brown drove to the new location and voted there.

“If my day hadn’t been as flexible to spend time going back and forth and searching for the new polling places that were not on my voter cards, and if I had to go to work in town, then I may not have voted,” she wrote.

Brittany Herren also had a similar experience in Georgetown, and she found out about the change of location by seeing signs and cars.

Khondoker notes that the moving of precincts has been happening on a rolling basis ever since the two elections were combined due to the coronavirus pandemic, but many voters weren’t able to accurately discover their polling places.

There were also reports of My Voter Page being down on Tuesday morning, so voters who wanted to double-check their precinct weren’t even able to do that.

“When someone shows up to vote at 6:30 a.m. at a place they think is correct because it’s always been correct, and now it’s been consolidated and moved and the person has to be at work at 9 o’clock, and now they’re checking online and nothing is there, what is that person supposed to do? Whose fault is that?”

“People were turned away because the tablet was telling people that they voted already. There were no answers, of course, because they only rely on what comes up in the system,” she says. “The Secretary of State’s office never clarified how the poll workers were going to be able to see that. It was just, ‘Oh, it’ll come up and resolve itself.’ Well, it didn’t resolve itself, and it resulted in several voters leaving without casting a ballot.”

The absentee ballot request form itself caused debate. The process of requesting a ballot, receiving the ballot, and completing and returning the ballot seems unintentionally complicated and not a meaningful opportunity to vote.

“I know [Raffensperger is] leaning on the fact that he sent every active voter an absentee ballot application,” says Khondoker. “It’s great that the state election board allowed drop boxes for the first time in Georgia, but allowing it and ensuring that it exists for every early voting location is something completely different. It’s no good to just say, ‘You can have this thing,’ but not give us any strategy or support. It’s not a meaningful opportunity; it’s a political move.”

For perspective, consider that in the hotly contested 2016 presidential election, Chatham County had to process about 12,000 absentee ballots.

With Georgia in the national spotlight for yet another dumpster fire of an election, there are plenty of eyes on the state to ensure fairness in the general election.

Khondoker says that All Voting Is Local is prepared to make sure these same problems don’t repeat in November.

“Their voice and their vote matters,” she says of Georgia voters. “No matter what barriers we see, they have to know they have our support. We are so happy they turned out in numbers. We’re so proud of our communities and we just need to make sure that they keep coming out, they don’t get discouraged, and that they understand this is still a worthy process and there’s no change without their vote.”

Khondoker urges voters to report any election issues to All Voting Is Local’s election protection hotline at 866-OUR-VOTE. 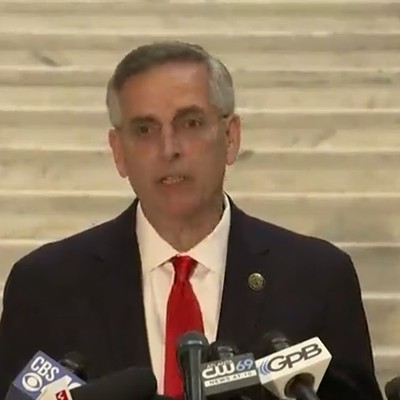