A tree grows at Ground Zero

Where these trees came from and how they journeyed to lower Manhattan is a story in itself, chronicled by filmmaker Scott Elliott in his 65-minute documentary The Trees

“The Trees” and Q&A with filmmaker Scott Elliott

IT SEEMS improbable, practically magical: A forest of full-sized, mighty trees where there was once only rubble.

The National September 11 Memorial & Museum is dedicated to those who lost their lives during the 2001 terrorist attack on New York City and Washington, DC. It occupies the footprint of the fallen towers of the World Trade Center, centered around memorial architect Michael Arad’s square, water-swallowing voids.

Using a combination of elements, Arad designed the monument to honor the dead as well as to give respite to the living. His winning blueprint, Reflecting Absence, incorporated the planting of 400 swamp white oaks inside the eight-acre site, a testament to the hope, renewal and tenacity of New York City.

The Memorial Plaza opened to the public on September 11, 2011 and attracts thousands of visitors a day who come to meditate near the pools, trace the engraved names or simply sit in the leafy shade of the oaks.

Where these trees came from and how they journeyed to lower Manhattan is a story in itself, chronicled by filmmaker Scott Elliott in his 65-minute documentary The Trees.

Made over the course of five years, The Trees follows the grove from its collection from various locations affected by the tragedy to their careful nurturing in New Jersey to the incredible feats of engineering required to bring them to Ground Zero.

The film premieres this week on New York’s PBS affiliate, and Savannahians can catch the first public screening outside NYC this Saturday, Sept. 10 at 4pm at the Jepson Center. The screening benefits the Savannah Tree Foundation and includes a Q&A with Elliot.

Brooklyn-based Elliott was a newbie filmmaker editing his first feature when the towers exploded, and like most New Yorkers, has carried a personal connection with that terrible day ever since.

“I always knew I wanted to make some sort of film about 9/11, but I didn’t have the right subject,” says the founder of 590films.

That changed one day in 2009 when a friend of a friend mentioned the trees while riding the subway, “where any good New York story comes to fruition,” laughs Elliott.

“What immediately interested me was how the landscapers had gone out and consciously found all 400 trees within a 50-mile radius of New York City, and I thought that was an interesting symbology. Then I met the guys who were so passionate about what they were doing, and I thought they were good characters, so I kept going and followed the story.”

The film includes interviews with arborist Jason Bond, who watched over the boxed oaks through the winters as well as Richie Cabo, the urban horticulturalist who helped bring the 9/11 Survivor Tree back to life.

The hardy Callery pear was found in the debris at Ground Zero, its branches snapped and its trunk scarred. Rescue workers brought it back to the Bronx, where Cabo and his team fed its roots and watched over it until new growth miraculously sprouted. The Survivor Tree’s planting in the 9/11 Memorial is one of the film’s most emotional moments, fed by the revelation that dozens of its cuttings now thrive around the country. 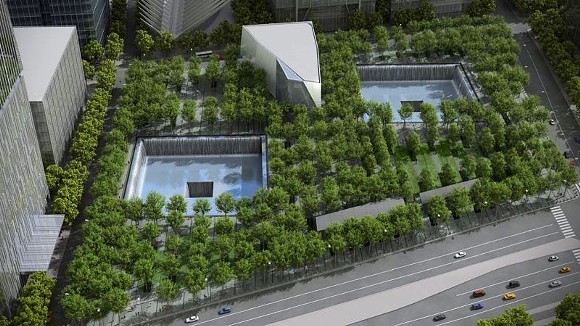 Architect Michael Arad and landscape architect Peter Walker describe their vision for the National 9/11 Memorial & Museum in the documentary The Trees.

While the narrative follows the trees, Elliott’s deft storytelling continually reminds of the people for whom they are dedicated. A repeated theme among the interviewees is how trees are mortal just like humans—the 9/11 trees have a 70 to 80 year life expectancy—though the filmmaker is careful to balance the metaphor.

“9/11 is a serious topic, you don’t want to diminish that thousands of people lost their loves ones,” says Elliott.

“I don’t want to anthropomorphize them too much. But there’s something about trees. They’re crucial to humanity.”

“Trees are such an important element of all public spaces, and the trees at the 9/11 Memorial Plaza have a wonderful story to tell,” says Jenkins, who tirelessly champions and educates citizens about Savannah’s fragile tree canopy.

She found out about Elliott’s project through his Kickstarter two years ago, and after the film was completed she contacted him about showing it in Savannah, where it would attract an audience committed to both patriotism and arboreal preservation.

“The Savannah Tree Foundation is privileged and honored to show The Trees in Savannah to commemorate the 15th anniversary of 9/11,” says Jenkins. (The screening is not to be confused with STF’s Fall Frolic, taking place the following Thursday, Sept. 15, at Ships of the Sea Museum.)

As the nation marks this significant and somber anniversary, some may find solace in the knowledge that Ground Zero is now a living memorial to those who were lost, commemorated by the unflagging passage of seasons, its blooms of spring and red leaves of fall to last for many years to come.

As one woman in The Trees describes the memorial, “It’s not set in stone. It takes on time, it evolves.”