A Year With Frog and Toad @Savannah Children’s Theater

THE Frog and Toad series of children's books are immensely popular, and have been a mainstay in many kids' collections for since the first was published in 1970.

The Broadway musical spinoff, A Year With Frog and Toad, continued the book’s tradition of telling stories of friendship and garnered critical acclaim—landing three Tony Award nominations in the process.

Savannah Children’s Theatre, a staple in the local arts community, is taking the beloved story and musical to their stage, performing A Year With Frog and Toad over the course of two weekends for morning and afternoon shows. The show is directed by Jenn Doubleday and features a cast of local Children’s Theatre veterans. 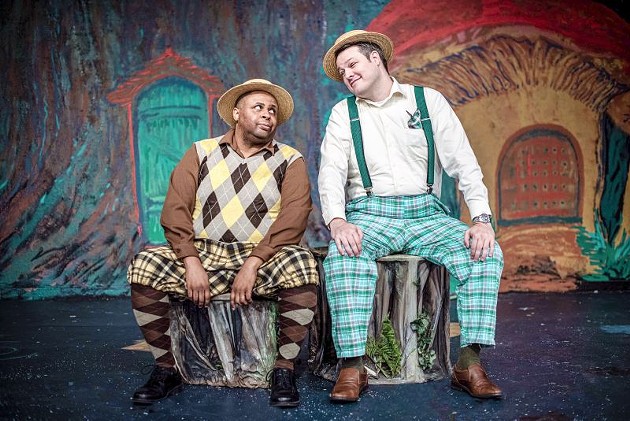 Ahead of opening day, we spoke with both Frog (Vann Doubleday) and Toad (Thomas Houston).

For those unfamiliar, what is this show about?

Houston: This show is based on a series of children’s books by Arnold Lobel about a frog and a toad—surprise, surprise [laughs]. It’s a musical based on the relationship between those two characters and some of the other creatures in the forest.

Doubleday: We start from hibernating and go through spring and all of the different seasons, and the things that come along with that. Frog and Toad are best friends, but they’re kind of opposites when it comes to their personalities. You see the back and forth when it comes to that—one is more happy, upbeat and adventurous, and the other is a little more begrudging. He comes along and life happens to him [laughs].

It’s a lot of fun. The musical incorporates a lot of the books’ individuals stories into an overarching theme. We go through the whole year together, having fun and adventures.

How would you describe the music?

Houston: There’s a little bit of variety in some of these tunes. It’s almost casual in the musical style. In a lot of ways, the music is very easy to embrace. It’s a very accessible show for all audiences, so it’s the kind of thing that you can hear and it gets in your head. There are a lot of earworms in this show [laughs]. It’s made the learning part kind of hard, because a lot of my favorite songs are ones that I don’t sing [laughs]. There’s just enough music to carry you through the story. The music helps define the characters—it’s very story driven and character driven, even.

One of my favorite songs is one that I get to do is one where I go off and be by myself. Toad thinks that we’re not friends anymore and that it’s the end of the world, but then he comes to see me and I sing a whole song about about how I’m really happy and just came out here to think about how happy I am; how it’s been a while since I’ve been sad and that I should be grateful for that.

How did you both come to be involved in Children’s Theatre?

Doubleday: I actually started at the inception. My wife, Jenn, is one of the directors and has been around since the theater started. I was originally a technical director there, and helped build the stage and the seating. I was there at the beginning and helped get it established. I’m a financial advisor now, so I’ve kind of stepped out of that role. I haven’t done a show since my daughter was born, and she’s 7 now. I was Horton in Seussical many years ago. This was an opportunity for me to get to do a show now that she's a little bit older and it's easier from a parenting standpoint. I feel blessed to be part of this cast—they're all really talented people.

Houston: I’ve been performing for about 10 years. I was always interested in expanding my circle as a performer, so children’s theater was something I hadn’t done before. If there’s a chance to do something new and different, I like to do it. And it’s fun, so having that opportunity was something I wanted to try.

Thomas, what’s been the most rewarding or exciting part about working on this show so far?

Houston: One of the things I enjoy about children’s theater, and one of the things I enjoy about being part of that, is seeing the children in the audience. They don’t always get a chance to experience this sort of thing, or interact with a performer after a show. We haven’t gotten to the point yet where we have an audience, but anticipating the laughter and finally getting to show this show to everyone—anticipating those moments has been the best thing.

Vann, as someone who’s been part of this for so long and watched it grow, why do you think it’s important to support the Children’s Theatre?

Doubleday: Not to have too much of a soapbox, but I think when you’re seeing so many of the arts diminishing in the school system, having outlets like the Children’s Theatre is such a great opportunity for kids regardless of what your professional ambitions are. Jenn and I met because of my background in theater, so it’s hugely impacted my life trajectory.

All of the adages as far as being able to speak articulately: public speaking, community involvement, having different opportunities to make different friend groups. There are just massive amounts of reasons why children’s theater plays such a huge role in anyone’s life.