AS we’ve seen for many weeks now, art exhibitions are moving online as the pandemic forces us to distance ourselves from each other.

Gone—for now—are the days of crowding into a white-wall gallery to see an artist’s latest body of work while mingling with other art lovers.

Now, artists rely on online engagement to drive sales and show off their work. Instagram Lives have replaced the opening reception and gallery talk; web pages have replaced an exhibition space.

Is this the way forward? Gonzalo Hernandez votes yes. 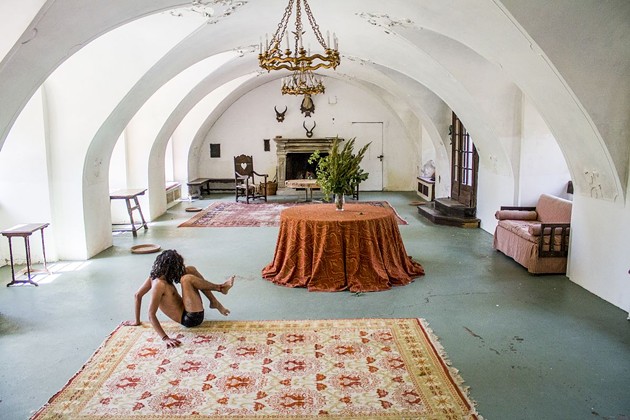 From Abi Tariq's "Freedom and Privilege."

"My generation is really computer-based, so I feel like they’re more attracted to an online platform than maybe a space,” he says. "I feel like that’s the future.”

Hernandez is forging the future with Abrir Galería, an entirely online platform with a focus on contemporary art from all parts of the world.

Abrir translates to open” in Spanish, a concept that Peru native Hernandez is particularly interested in.

"We selected ‘Abrir’ as a name because it’s to open doors to these new artists and to open visibility in general,” he explains.

Hernandez has had dreams of opening an online gallery for years now. Before coming to Savannah to attend SCAD, he interned at Bridget Donahue in New York City, and he continued that experience here by working with Susan Laney at Laney Contemporary.

"I’ve always wanted to have a gallery, so why not do it now?” he asks.

Having recently moved from Savannah to Kansas City with his wife, Hernandez felt the importance of a gallery that was able to reach people from all over. That need was exacerbated by the pandemic.

"Everything is virtual and online,” he says. "Especially now that we can’t go to any galleries or museums, I feel like it makes total sense to create these online platforms.”

From César Augusto Ramirez's "Before It Disappears."

Hernandez is open to hosting pop-up locations of Abrir Galería in the future, but that’s solidly in the future. For now, Abrir will be online, beginning with its first exhibition, “Today.”

"It’s basically my own view of what contemporary art is doing and what artists are really interesting for me right now,” says Hernandez of the exhibition. "I have the whole programming for the year already with different curators and other artists just to keep looking. There are so many artists that I like, and they need visibility.”

"Today” features five artists that Hernandez has, in a sense, picked up in the places he’s lived previously: Leia Genis from Savannah, Ga.; Abi Tariq from Paris, France; and César Augusto Ramirez, Ingrid Pumayalla, and Martín Rodriguez Míglio, each from Peru.

"I know all the artists, but they don’t know each other,” says Hernandez. "I wanted to feature people from different parts of the world and have this group of artists that I follow. They’re making work that I really like.”

Each artist explores the idea of time and space in their own world through the body of work they’re exhibiting.

Genis’ project, “Length of a day,” explores space and time through body and action in a video performance that shows the artist walking back and forth.

Tariq’s series, “Freedom and Privilege,” asks questions about where the true wealth of humanity is.

Ramirez’s photo series, “Before it Disappears,” attempts to generate a dialogue between the materiality in the consumption of photos and their digitization.

Pumayalla’s “Nuna” is a self-portrait that features a background conversation with her grandfather.

Miglio’s “Contemporary Art Ideas?” allows him to explore his own field and what being an artist is like. 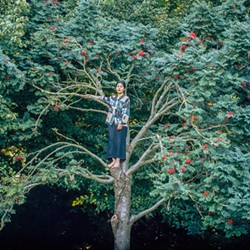 Ingrid Pumayalla's "Exercise to Climb a Tree," from her "Nuna" series.

Abrir Galería opens with “Today” on May 25 at 11 a.m. EST, when the website goes live. With a typical, in-person exhibition, the success of the showing is determined that night, dependent on whether the gallery fills up or not.

It’s a little different for online exhibitions, of course. Hernandez has analytics on the website to see the traffic, but like most people in his generation, he has a different metric to measure success.

“We’ve been on Instagram for two days and I think we have 100 something followers,” says Hernandez. (As of press time, @abrirgaleria had 148 followers in five days.)

Is this really the new way? Does social media interaction determine a successful body of work?

In a lot of ways, it already does. There’s no question that artists and gallerists who are on top of promoting themselves online get more attention. That’s not a new thing by any means: artists who get the word out about themselves are the ones who get written about, whether that’s via flyer or press release.

The carryover to social media is clear. For my own part, I learn about many artists via Instagram, and I’ve had more than one artist slide in my DMs to promote a new show, a new piece of work, or just themselves.

Leia Genis' "Length of a Day."

That’s not to say that social media prowess equals talent. There are plenty of talented artists who aren’t Insta-famous—and getting to that point takes a lot of time and effort, which can take away from the actual point of making art.

But as time goes on, and as the generations who have never been without a cell phone start to be the ones in charge of things, this is increasingly the way it will go. The pandemic simply showed us that it was possible.

Older, more traditional folks may balk at this turning of the tides. Renowned art critic Jerry Saltz has bemoaned the idea of “online viewing rooms” on Instagram, and I’m sure he’s not the only one.

To be clear, physical art galleries will never go away forever. Some art just must be experienced in person, and art openings are such an integral part of being in the art scene. (If nobody sees you at the reception, were you really ever there?)

But as we move forward into post-COVID territory, I think it’s more important than ever to be open to new ideas. And that, mis amigos, is where Abrir Galería comes in.

A whale of an exhibition