Jean-Michel Cousteau's Secret Ocean 3D is a highlight of Fest

WHILE HE bears the most famous surname in the history of ocean science, Jean-Michel Cousteau doesn’t rest on the laurels of his legendary father, Jacques Cousteau, who passed away in 1997.

Now 77 years old, Jean-Michel has more than established his own legend, both as an intrepid undersea explorer and as a passionate advocate of marine conservation.

While disputes and disagreements meant Jean-Michel would eventually separate from his father’s Cousteau Society, he would go on to found his own organization, Ocean Futures Society, and establish a career as an independent filmmaker. 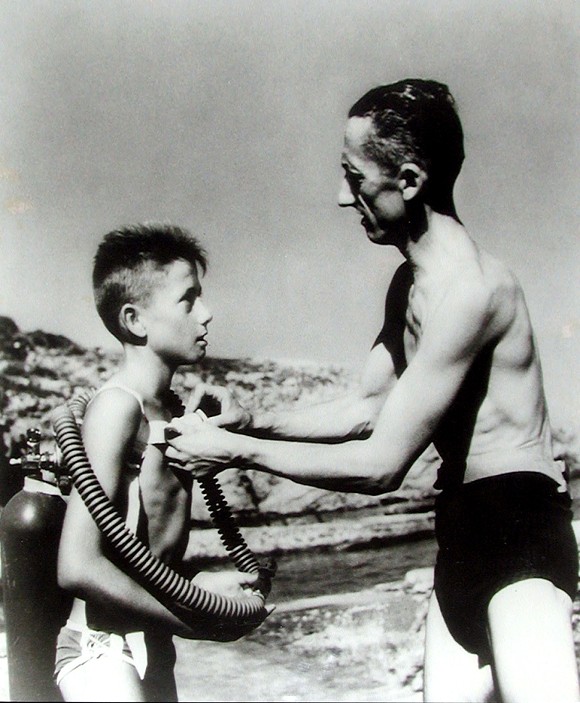 A young Jean-Michel with his famous father Jacques Cousteau

Jean-Michel spoke to us from his headquarters in Santa Barbara, California.

The filmmaking advances used in your new films aren’t only cinematic breakthroughs. They’re also useful for research, aren’t they?

I’ve been diving for 70 years, since my father pushed me overboard with a tank on my back. I’ve never stopped and I never will. I’m amazed thanks to these friends and technicians, who have literally created ways to focus in slow motion on small things, microscopic things.

These are things never seen with the naked eye because they’re either too small or it happens too fast. That to me is absolutely unbelievable.

It’s very important because it emphasizes the fact that small plants and animals are the foundations of all life in the ocean and connect to the largest creatures, like whales, dolphins or sharks. Without these smaller creatures, we—and by “we” I mean all species —wouldn’t be here.

We are totally connected to the ocean and to the foundation of all life. To have a chance to show all this in 3D to the public is fascinating.

When we film underwater with this equipment, we don’t always know what we filmed. We come back to the ship and we see on a big screen if what we’ve shot is good or not. If it’s not good, we go right back down to the same place, sometimes two or three times, before we say “that’s perfect.” It’s a totally new approach.

What are some of the threats you’re most concerned about to this interconnectivity you speak of?

Often because of climate change the temperature of many parts of the ocean has changed, disturbing the life of plants and animals. In addition there is the acidification created by the emission of CO2. Also there is the fact that unfortunately in many places people continue to use the ocean as a garbage can.

All the chemicals we get rid of, all the metals we dispose of, all of of that ends up in streams and river and ultimately all the way to the ocean. It’s impacting our life support system.

Yet you aren’t completely pessimistic about the future.

I’ve been in the ocean all my life. I’m learning a lot of new things, thanks to science and research creating new technologies that can capture all this. There will be new industries, and millions of jobs created all over the planet.

There is this very exciting thing I call the communication revolution. Borders mean less and less.

I had the privilege to be underwater in 1998 and connecting satellite communication with people who could see me underwater. They could ask me questions in Vietnam and Canada at the same time.

We especially need to educate young people because they are the decisionmakers of tomorrow. In the business world, it’s all about profit at the end of one year. In politics, it’s all about getting re-elected. We need to bridge the short and long term.

I get the sense that you see technology as providing a better solution to these problems than politics.

But when I showed President George W. Bush what we’d found in the Hawaiian Islands and the impact it had, that led him to ultimately declare that part of world the largest protected ocean area under the control of the United States.

[Editor’s Note: The reserve is the Papahnaumokukea Marine National Monument, established in 2006.]

And President Bush was in the oil business! (laughs) So I don’t point the finger.

I think overfishing is one of the most serious, and underreported, environmental threats.

The biggest threat is to people. And it is that we take more than nature can produce. So we're headed into bankruptcy.

What we need is to create protected areas, in places where species reproduce. And then when there are too many in an area, they’ll go out and populate other areas.

We’ve done that in California, where 20 percent of the marine area of the islands is protected. A lot of fishermen were not happy about it! But today they’re thanking us, because their livelihood can continue.

It’s an old story. When people were hunters and gatherers, we went from a few million people on the planet to many millions.

Soon there wasn’t enough left to hunt and gather. So we settled down and started farming—farming plants and farming animals.

Today with salmon, we need between 8-12 pounds of wild fish to make one pound of salmon to sell! That’s absurd.

When you buy fish you don’t buy fish, you buy the service of catching fish, of shipping the fish, of freezing the fish. That’s why it’s so expensive.

I’d like to see all over the world new fish farms built where the demand is, at the size of that demand. A system of fish farms like that would stop the emission of CO2 as transportation.

The price of fish would be low compared to catching fish. There will be huge opportunities.

Have you given up on the idea of a multi-national moratorium on big-net ocean-trawling factory ships?

Depends what it is. You have to be careful about the kinds of nets you use.

For example, near Mexico where they catch shrimp to ship to California—we filmed there, by the way —I realized that to get one pound of shrimp, they are killing 100 pounds of fish. Absurdity!

I asked the fishermen about it, and they say we can’t sell those other fish. We don’t have a market. So they end up just dumping dead fish back overboard.

Here we are, these spoiled brats in California, eating shrimp which contribute to the killing of 100 pounds of fish.

You have an upcoming film, Odyssea 3D, scheduled, using much of the same camera technology as in Secret Ocean 3D. What point are you at with that?

The filming for Odyssea 3D is done. We've been in five different parts of the world ocean: Fiji, Southern California, Baja California, the Bahamas, and the Mediterranean.

The crowdfunding campaign for Odyssea 3D begins in early February and you can go to odyssea3d-thefilm.com to help us out with this important project!