Adjusting to a new reality

Donations can be arranged by emailing photos of bikes to info@bikewalksavannah.org

WHILE distilleries were retooling their production lines to produce hand sanitizer, Mark Sussman and his colleagues in Washington D.C. were repurposing their smartphone app to help people find stores that had it in stock.

Launched in January, OurStreets was originally designed to serve as a “community-driven data platform through which users can report dangerous driving and shared mobility issues,” such as cars parked on sidewalks or in bike lanes.

Now the app has been augmented with “Supplies” an interface for shoppers and retailers to update stock levels, and a search feature to better understand the supply level of essential goods in their communities.

“I got a call from the DC Department of Public Works in mid-March asking if we could repurpose OurStreets to crowdsource the availability of essential supplies during the COVID-19 crisis. We of course said yes and realized quickly that this needed to be a nationwide effort,” Sussman said.

“A few hours after that call, I huddled the OurStreets team that was already working from home at that point, and we got to work that day. We went from that meeting to launch in 11 days, doing about two months of product development in less than two weeks.”

In addition to hand sanitizer, the app allows shoppers to report stock levels of toilet paper, dairy products, and fresh produce, among other items. Users can also report whether or not social distancing is being practiced inside stores.

“Additionally, we’ve been able to activate our existing municipal and advocacy organization relationships to promote OurStreets Supplies, this in turn is bringing more users to the platform. A portion of new users brought in through these efforts are really digging the street safety work, so when we ‘re-launch’ OurStreets street safety functionality post-COVID-19, we’re going to have a much larger user base.”

Sussman said the pandemic is also making people more aware of how much public space has been surrendered to motor vehicles now that “walkers, runners and cyclists fighting over the scraps and trying to safety social distance at the same time.” 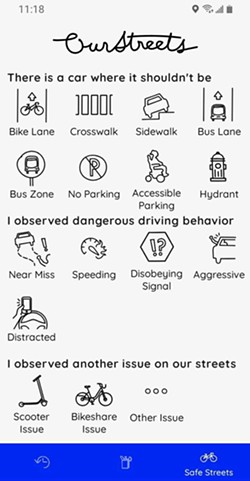 “As spatial distancing requirements continue, more and more people are recognizing how hard it is to do properly in the space currently allocated for people walking, biking or rolling. But they’re also recognizing the importance of the physical and mental benefits brought by that exercise, and are asking why so much space is dedicated to vehicles that aren’t going anywhere,” she said.

Brown hopes this will lead to more empathy for those who faced significant mobility challenges even before the pandemic hit. She said she senses that Savannahians are “acknowledging the difficulties faced by people getting around for transportation, and not just recreation.”

“We were prepared for more requests for bikes coming in from our existing partners, but quickly realized that they were getting overwhelmed with requests related to housing, employment and food needs. We decided it was the perfect time to temporarily open our program to working directly with individuals,” she said.

Inspired by an initiative launched in New York City by the group Transportation Alternatives, other organizations in Georgia have initiated “Bike Match” programs to pair those in need of bikes with people who have bikes they are not using.

So far Brown said she’s received nearly 150 requests for bikes and hears similar stories from those who need them.

“Many of them are people who rely on Chatham Area Transit to get around, but with the reduction of bus services they have found themselves walking hours to get to work, or their shift has changed and their carpool is no longer available, or they now have to get groceries for multiple vulnerable neighbors,” she said.

“These are bikes that, with some air in the tires or a quick dusting, you would feel comfortable giving to a family member or friend to immediately ride,” she said.