"Grounded" opens Mar. 30. On Mar. 29, Alvarado will host an artist talk at the Jepson Center at 6 p.m. The talk is free and open to the public.

STREET ART comes inside with Adolfo Alvarado’s "Grounded," opening this Friday for the Telfair’s #art912 program.

Alvarado was born in Ciudad Juarez in Mexico, right across the border from El Paso, Texas.

“El Paso is the second safest city in the United States, and then just across the border is Juarez,” Alvarado says. “When that drug war was happening, they called it the worst city in the world when because of all the violence that was happening.” 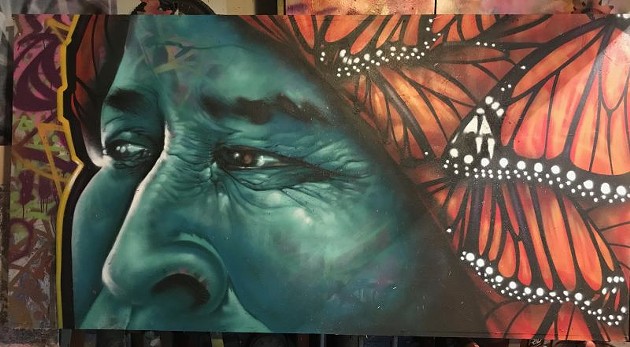 The violence Alvarado witnessed in his younger years informs his work now, both consciously and not. One piece in his collection is a reference to a particularly gruesome mass killing of girls in Juarez.

“In the ‘90s, I don’t know what was happening, but a lot of women were turning up missing,” Alvarado recalls. “You’d hear different numbers—some people said hundreds, some said thousands. Some even found their remains in the deserts or on the outskirts. It was a big scare round El Paso and Juarez because nobody knew who it was or who was doing it. They still don’t know. What they were finding out, too, is that the police were involved and people writing articles within the city were getting death threats for writing about it.”

On every telephone pole in Juarez, Alvarado recalls, someone painted pink pastel squares with a black cross in the middle. That same pattern is included in a piece in the show, working machetes and a decorative found object into the piece.

“It kind of got better, and the numbers got less and less,” says Alvarado. “But then the drug wars started in 2008. I couldn’t see my family across the border because we were afraid of not coming back. I lost a cousin and an uncle when all that was happening.”

Alvarado’s mother knew that giving her son a creative channel would help keep him out of the trouble that surrounded their city.

“To get me to be still and focus, she would make me draw circles or dashes on a sheet of paper, and then we would connect all those lines and make them into farm animals,” Alvarado says. “But then when I was in middle school, my mom got phone calls from the school because of things I would draw in class. I remember she got a call one time because I drew a war scene, so they wanted to know what was happening at the house. But it wasn’t anything like that, it was just my imagination. So being in trouble at school, and because my mom got called, I got grounded at the house.”

That’s one meaning to the title “Grounded.” The other meaning references art’s stabilizing power in his life.

“In high school, I started getting in more trouble and there was more of the local gang problems, so that’s when I joined the mural team,” Alvarado says.

“The art teacher started a mural program and she asked me to join her. That’s how I started painting, really. When we first started doing murals, a lot of them were historical murals, so we had to do a lot of research behind them. If we wanted to paint a certain figure, we would have to know why we’re painting them. That also helped me get away from my friends in gangs because then I started looking at the history we had in that area and through Mexico. In the neighborhood, you grew up around all that gang stuff. It’s not just your friends starting something; it’s generations and generations.”

When Alvarado came to SCAD in 2002, he brought his love of murals with him, but he didn’t have that outlet for public art he had in El Paso.

“I didn’t start doing canvas paintings until I got to Savannah, because it’s hard to find a spot to paint downtown or midtown. There’s regulations,” he says. “There’s a committee you have to go through, you have to present your idea and show them what it’s going to look like and what the story behind it is. I’ve done that before, but to get jobs, not just to graffiti.”

Despite the tough restrictions on public art, Alvarado hopes to get some sort of mural festival going with his muralist friends from across the country.

“Garden City doesn’t have any mural regulations,” he points out, “and there’s a few buildings I’ve seen outside Savannah, like abandoned warehouses. I have friends in other cities who do [mural festivals]. I do some traveling and when I’m out there they’re like, ‘Hey, what does Savannah look like?’”