Cleo Parker Robinson Dance Ensemble performs February 3, 7:30 p.m. at the Johnny Mercer Theater, 301 Oglethorpe Ave. Admission is free but seating is open and will be on a first-come, first-seated basis.

Echoes Walk I kicks off on February 4, 10 a.m. Explore the Beach Institute District and landmarks with Johnny Brown and the Freedom Trail Tour, and end at the Great Blacks in Wax exhibit at the Beach Institute African American Cultural Center. For reservations and gathering site, call 912- 398-2785.

Julieanna Richardson, founder and executive director of The HistoryMakers, will present the annual W.W. Law lecture Feb. 9, 6:30 p.m. at the Jepson Center. 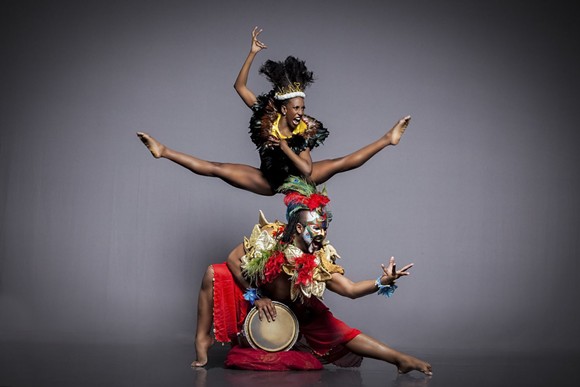 The Cleo Parker Robinson Dance Ensemble performs this Friday in a free performance.

NOW IN its 28th year, the Savannah Black Heritage Festival brings a remarkable number and variety of events to town all this month.

While the marquee event is this Friday’s performance of the Cleo Parker Robinson Dance Ensemble, that’s just the beginning.

A series of guided “Echoes Walks” will take place at historic African American sites throughout town during February. And Julieanna Richardson will present the annual W.W. Law lecture on Feb. 9.

We spoke to longtime Black Heritage Festival coordinator Shirley James in advance of this year’s edition of the beloved local event.

I guess you were relieved when the festival funding was restored along with all the other groups!

James: Of course (laughs). Looks like we're okay for another year, at least.

To some people your name is virtually synonymous with the Savannah Black Heritage Festival.

A lot of it really came about first of all through support from the City of Savannah back in 1999, when Mayor Adams was in office.

The next big step came about ten years in, with the decision to select SSU as a parent organization. As an HBCU they have a little more insight into how to promote African American history and cultural contributions.

Of course the late W.W. Law is really the originator of the festival when you look into Savannah’s history. The museums he founded continue to be his legacy through this festival. That was his major aim and objective—to bring African American history to the forefront.

One major component has to do with way this community has embraced the festival, and a lot of that is thanks to the people who work on a volunteer basis who have bought into the whole concept.

I cannot emphasize enough the great collaborations we’ve established with institutions in this city.

That’s why we’re able to co-schedule programs of this nature.

The new addition of the walking tours is particularly intriguing this year.

It’s another approach to the goal. We’re always trying to promote the African American history of Savannah. So we’re having these Echoes Walks. We have three Saturdays devoted to various sections of the city. You walk past these sites with a guide and talk about the people who made a a difference in those places

For example in West Savannah, the Abbott/ Sengstacke site is very significant, That family really were instrumental in promoting African American journalism thoughout this country. And the cradle of it was right here in Savannah.

We’re bringing in Julieanna Richardson as our W.W. Law lecturer this year. She’ll also visit with school system. She’ll talk about the importance of that particular collection in Library of Congress. It’s the largest oral history of Afircan American history in the U.S.

We do entertainment while Savannah State University tries to focus on the educational aspect. And of course we’ve brought in the health component as well. This really is about enhancing the whole person.

What do you think is the next step for the Black Heritage Festival?

We’re at a healthy point but there’s a ways to go. Through our festival and organizations like the Georgie Historical Society, more information’s being shared in reference to things that haven’t come to the forefront before.

The end of the Obama era has also seen a time of great and rapid change for African American consciousness in other areas of society. How do you decide how far to take the Festival into those directions, such as the Black Lives Matter movement and things of a more political nature?

You focus on the local but you also have to bring in what’s happening in the state and nationally as well. As we end the era of President Obama, it becomes a historical fact now.

At my age, it’s nothing I’ve ever dreamed would happen. I thought I would ever witness this based on my background.

It’s been an amazing thing to watch, and it’s quite a fulfillment to say I’ve lived during his time.

We have always been a people who have hope no matter what has happened to us. We have to continue with that hope, especially with our young people. And not just young African Americans.

Young people do have a different perspective on life because of the multicultural environments they’ve been brought up in. They are our hope.

We have to pass the baton. We have to help educate them so they have a good historical background, so when it’s their turn they can focus on how to make this a better country. cs