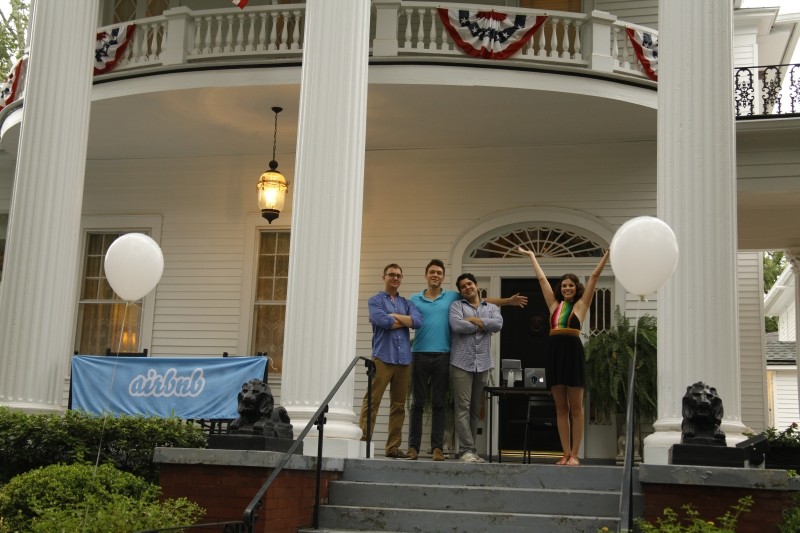 FALL, 2007. Three friends inflate some air mattresses and advertise them to convention-goers under the newly minted moniker "Airbed and Breakfast" in order to make rent.

While Savannah is already a destination on the Airbnb map, we could stand to peddle still more Hostess City hospitality (and revenue) on our webpages.

The company even offers free professional photography to hosts and one-on-one consultation. Accommodations come in all shapes, sizes and locales — a couch to a castle, a private room to a private island, an igloo to a tree house, a yurt, a teepee, and all shapes and sizes in between.

Dubbed the heralds of the "sharing economy" by the New York Times' Thomas Friedman, Airbnb offers something new(ish): a service for the people, where everybody wins.

Justin Hauge, U.S. Head of Market Development at Airbnb, hopped aboard early on. Hauge is pretty much the personification of the brand: high-energy, young, charismatic, incredibly tall.

"If you had extra space, even it was just a couch or air mattress, you could put that up and make a little additional money that you normally wouldn't have had the opportunity to without the platform," Hauge says.

The Airbnb site found its footing during the crunch when people couldn't pay their mortgage, couldn't make ends meet and were losing their homes. In other words, desperation may have had a hand in jumpstarting people's motivations.

But should it be? Federal minimum wage is still an unlivable $7.25 an hour; the state of Georgia legislates an appalling $5.15/hour for employees not subject to the federal Fair Labor Standards Act. Three out of every four Americans live paycheck to paycheck, or outside and above their means. The top five percent just bankrolled a bigger percentage of America's income than ever before.

In our Citizens United-flavored dystopia, the only person looking out for what's left of the middle class as it continues to die a miserable death might be the paying guest lodged in your spare bedroom.

"I don't think there's going to be a time in the short term where people aren't going to need a little bit of help at the end of the month to make ends meet," Hauge tells me, preaching to my choir. "If we're able to do that, it's a huge motivating factor."

Hauge and his street-smart sales team spent three sticky August weeks in Savannah arranging small-scale community meet-ups at local host venues and out on the town at Foxy Loxy and Huc-a-poos. The team would pick up bar tabs, chat with folks, give away free pizza and hors d'oeuvres and work out the hands-on sales angle.

"We just go out, celebrate the people, celebrate the community, just keep getting the word out and keep growing that way," Hauge explains. "It's super scrappy. The results have been awesome. We're not just some Internet company that's sending you emails. We're real people who are hosts; real guests who embody the spirit."

Granted, the concept of Airbnb runs counter to what we were always taught: Don't talk to strangers.

"You know, people who say: 'You let strangers into your home?!' and the answer is: 'Yes.' We have different protections in place to make everyone as comfortable as possible. Ultimately, something's going to have to motivate them to do it."

The team, most of them hosts themselves back home in San Francisco, encourage other hosts to scope out potential guests to figure out their motivation for traveling before accepting the reservation.

"We built in different things like the reviews and the million-dollar host guarantee and verified ID so you have a better idea of who this person is who wants to stay in your house."

Just as travelers have different reasons for wanting to bunk with Airbnb, hosts also have different motivations, surprisingly not always just for the money.

In Savannah, Airbnb host Lori plans to use Airbnb income to build a Japanese spa and a mini-horse ranch on her property.

And then there's Vickie, who always wanted to run her own bed and breakfast. Now she's living her dream and beating out empty nest syndrome at the same time.

Chad uses the extra income from his Airbnb guests to vacation in Thailand and Brazil.

Steph and Clint are saving up to adopt a child from a third world country.

"We don't want to force this on anybody," says Hauge. "It takes a certain kind of person and we want to maintain the integrity of the community. It's very much self-selecting."

The takeaway is this: In order to share in the rewards of the sharing economy, you'll need to person-up; be brave enough to host and be hosted, just like the three million other people who booked with Airbnb last year alone.

After all, Cambridge professor Sir Martin Rees predicted that mankind has only a 50/50 chance of surviving through 2100, which means you may have only a few decades left to put yourself out there, live a little and stop being afraid of meeting new people.

"We're kind of different in our thinking," Hauge adds. "We really think that people are inherently good and it's not that weird."