AJ Ghent at Midnight Garden Ride: Steel the one

Guitarist riffs on a family tradition 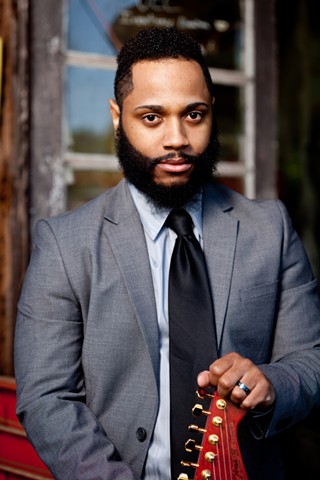 Forged in the congregational hotbox of the Southern Pentecostal House of God church, sacred steel music is an electrified rhythm, punctuated by sharp blasts of soaring solos, played on amplified lap steel guitar. It's an open tuning, on an eight-stringed instrument, and sometimes it can sound like the roaring, whooping and hollering voice of God himself has joined the gospel fervor. And he's an alto.

Through the mainstream success of such artists as the Lee Boys, and Robert Randolph & the Family Band, sacred steel has entered the musical lexicon. These days, you hear it at hippie jam band festivals the world over, and its fiery, teary sound has also crept into bottleneck blues work of stalwarts like Derek Trucks and Warren Haynes.

As a child in Fort Pierce, Florida, AJ Ghent heard sacred steel at the House of God, although he admits he didn't "grow up in the church." The young guitarist and his six-piece R&B band will perform Aug. 31 in Telfair Square, following the Midnight Garden Ride — and sacred steel, get ready, has never sounded quite like this before.

"We're in the process of creating something different but familiar," Ghent says, "bringing the world old-school flavor with a new twist. It's almost a James Brown-meets-Jimi Hendrix type thing."

The most obvious innovation: Unlike classic lap steel musicians, Ghent plays the instrument standing up; it's on a strap around his neck. "I started playing sitting down, and then I found myself doing too much movement," explains Ghent. "Getting up, running around and sitting back down seemed like it didn't serve a good purpose for me. So I started standing up and playing. I saw that it made more sense to do that. Plus, I like to dance — so it helps me be able to do that and keep choreography in the group."

Ghent's left hand — his fretting hand — comes in over the top of the extra-wide neck. "I really wanted to adopt a more electric guitar style of playing, with the crossover of a lap steel," he explains.

"A lot of times, people don't even realize what I'm doing. For a while, it looked kind of silly. Even I had to get used to seeing myself doing it."

The world at large first got a look at him when he apprenticed with Georgia's jam-band daddy-o, Col. Bruce Hampton. Ghent was lead guitarist in Hampton's Pharaoh's Kitchen band.

"Don't get me wrong, it was definitely something I had to develop," Ghent adds. "Because I was used to playing sitting down, for so long, when I started standing up it was like learning the instrument all over again. It was a lot of trial and error, but I got the hang of it. I wanted to do something so new, and so fresh, and bring even more excitement back to the instrument."

Students of the sacred steel movement will recognize Ghent's surname — his father, Aubrey Ghent, was a pioneering player, as were his grandfather, Harry Nelson, and great-uncle Willie Eason.

"My mother and father were divorced when I was at a really early age, so I wasn't even exposed to the instrument as much as it would probably be thought," Ghent explains. "I heard it here and there quite naturally from going to church, but I was in and out with my mom."

He was 11 or 12 when the big epiphany came. "It was one of the first sacred steel CDs, with my father, my grandfather and my great uncle on there. At that point, I became interested in the instrument, and I would listen to that thing until I broke it.