It’s a rock and metal-themed pair of reviews! 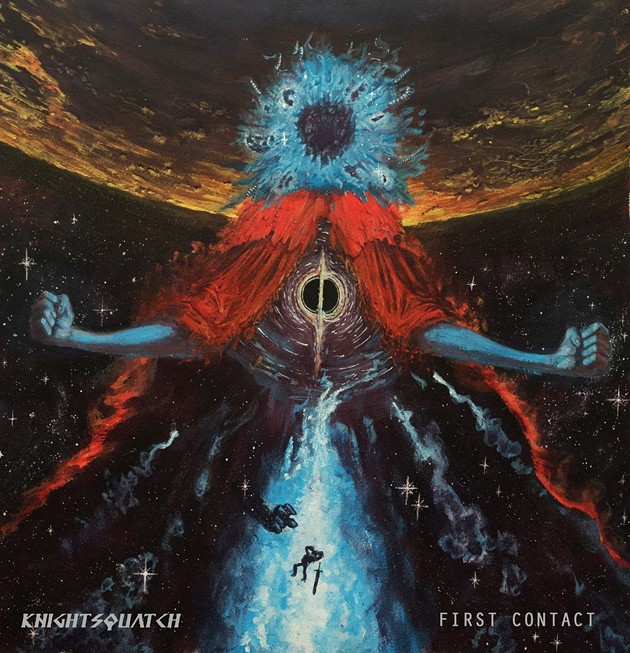 Knightsquatch’s excellent 2019 EP First Contact is a mere three songs long, which is frustrating because I really wanted to hear more after listening. That’s not a particularly bold statement to make about an album you like, but it carries a lot more weight when you consider that this EP clocks in at around 40 minutes. Yes, you read that right—40 minutes.

For those that aren’t typically into long, expansive songs, I’m here to tell you that you should be giving this EP a chance. “Misanthropocene Sword,” the final song in the set, is 21 minutes long but it accomplishes the very rare feat of not feeling like that at all. Knightsquatch is incredibly good at keeping an arrangement interesting enough to capture a listener’s attention and not let go of it, even as dynamics flow and things twist and turn.

“The Tower” is my favorite song on First Contact, because it best encompasses all that this band is trying to do, in my view. It’s a crazy combination of prog, metal, screamo, scifi, and even jazz. There’s so much packed in here, but the key to doing that right is for the composition to have context and be performed in such a way that it feels cohesive and tasteful. The band does this amazingly on all three songs, and proves in the process that they’re a band to watch. Knightsquatch signals on First Contact that they’re skillful musicians and composers with the creative drive enough to keep pumping out captivating recordings.

Why Depressor hasn’t garnered more national recognition than they have is beyond me. It’s quite rare to find a band that has a genuine passion for giving a nod to the metal scene that Savannah has become known for, but they do just that—while also putting their own stamp on the scene and revitalizing that very same scene in the process.

On Callous, the band’s first release from 2018, they make this statement right away and never back down from it. The incredible thing about this band, and this record, is that they don’t adhere to one particular facet of extreme music or one subgenre of metal. There are bits and pieces of lots of different things in what they do, whether it’s hardcore, thrash, or even speed metal and sludge. “Visual Distort” is a great example of why Depressor is a different kind of metal band, and why what they do is so unique.

“Wickedness Has No Taste” is brutal from the get go, with a guitar sound that will make the hairs stand up on the back of your neck. This might be my personal favorite on the album, for lots of reasons. The biggest thing that makes this a standout, aside from the inventive guitar sound, is the imaginative structure and shifts in time signatures. It’s one of the things that makes this band so impressive, and signals that they’re doing some significant and singular things within their musical world.

Depressor is a band to keep tabs on, if you’re a fan of rock and metal. It’s rare to find a band these days under the umbrella of extreme music that sounds truly unique, but Depressor accomplishes this wonderfully.

For more on Depressor, visit depressorga.bandcamp.com