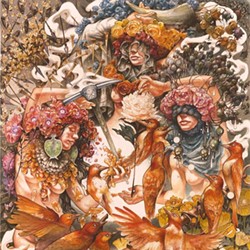 In reviewing Baroness’ latest album, 2019’s Gold & Grey, I found myself—for the first time in a long time—not knowing where to begin. The band got a reboot of sorts with the addition of guitarist Gina Gleason, and Gold is the first to feature the newest lineup. On first listen, it’s got everything we all love about these guys, but there are some stylistic and production shifts that make this perhaps their most compelling work to date.

Alongside the brilliant Dave Fridmann, known for his production work with The Flaming Lips, the band has created something that I have no doubt will stand the test of time. It’s an album that expands on the band’s cemented sound and their signature blend of progressive metal, alternative rock, and stoner rock sensibilities. John Baizley is in his finest form on this record, hands down. As a songwriter, he’s shattered expectations and brushed off whatever potential pressure there might have been to make a certain type of record.

One particularly intriguing aspect of this record that makes it stand out is the focus on harmonies—particularly three-part harmonies—throughout. What this accomplishes is making the songs that much more melodic and vocally weighty, though you never lose the brilliant compositional aspects as well.

“Throw Me An Anchor” is a personal favorite, because it seems to be the best example of what the record accomplishes on all fronts. Sebastian Thomson’s drums are front and center here, as the fills are magnificent and tasteful—something that might be hard for another drummer to do on such a riff-heavy song that might normally dictate something flashy.

Tasteful is a key word when describing this song, and the record as a whole. Others in the world of heavy rock and metal might rely on the riffs and the bombast to turn heads, but Baroness shows on Gold & Grey specifically that you can do more than that and make an impact. The songs are there, the sonics are there, and the riffs and compositional aspects are as engaging as ever.

There’s a fair amount of dimension on Gold & Grey from a sonic standpoint as well, with Fridmann and the band utilizing console distortion and a generally healthy amount of saturation to push the envelope and make the songs sound less clean. This is a really, really good thing for a record of rock and roll earworms, because it allows the songs to stand alone without being stifled by a more polished production approach.

The record ends with the groove-heavy and ambient “Pale Sun,” which is another example of why this is such a standout in their catalog. It’s no wonder this record has earned the band some of the best reviews of their career, and even found them charting at number one in the U.K.

If only a more mainstream audience here in the U.S. would embrace such a brilliant, thoughtful, daring, and beautifully jarring record.