All aboard the Brain Train

Imagine a day when the ride from Savannah to Atlanta no longer requires baking in your car on I–16 for four–plus hours.

When in–state travel has become civilized and relaxing. A day when attending to business or pleasure in the state capital means simply stepping off a platform.

While a passenger rail line between Atlanta and Savannah has tremendous potential benefits in both directions, it’s still far into the future. Yet the daydream persists for those who understand the positive impact of such a service:

Increased development around station communities and fewer vehicles on the road are among the attendant economic and environmental advantages cited by states with revitalized passenger train systems, including North Carolina and Ohio, and Savannah businesses would surely benefit from visitor traffic from the other direction.

Two Savannah residents have recently launched South by Southeast with a mission to organize the dreamers–as well as university faculty, students and business leaders–to see if their collected skills can move this train forward in Georgia.

“Part of the immediate goal is to absorb the cost of research by tapping into and linking the intellectual and academic resources already here,” says Katherine Hazard, South by Southeast’s project manager.

“Market research can be done at one school, another school can study appropriate business models. This is intended to be an interdisciplinary, inter–collegiate effort.”

With over 30 colleges and universities operating along the corridor, there is certainly potential for broad collection of research and development.

South by Southeast has completed its first phase by proposing ten research categories on its website, from market research about ticket fares and weekday commutes to holding competitions for new engine car design.

While there is an existing track system, studies need to be conducted to see what it would entail to upgrade them to class 3 or 4 rail requirements.

Each of these can be adopted by university teams and ultimately feed into a feasibility study to show the state legislature that funding a rail line is a viable and valuable endeavor. The next step is to get people talking.

“The idea is to get the discussions going about how to reduce cost, build community support and get the political leadership behind the project,” says Jack Simmons, Armstrong Atlantic University associate professor of philosophy and South by Southeast’s academic advisor. “We also want to know what we haven’t thought of, what issues we haven’t considered.”

“This is a chance for faculty and students to complete a research project while contributing to a meaningful public service,” adds Hazard.

Other attempts to create passenger rail lines in Georgia have been explored, notably in May 2010 by the Brookings Institution Corridor Study commissioned Georgians for Passenger Rail.

That project involved a proposed a shorter Macon to Atlanta connection, with a final price tag of $75 million for capital and operating costs through 2030. The expense was refused by the state, but GPR continues to concentrate its efforts out of Macon.

South by Southeast’s proposed line covers more ground, but also draws upon a grassroots network of Georgia academics who can contribute to the project without corporate consulting fees. If it can show a reduced cost and drum up enough community interest to convince the folks at the Capitol that a cross–state rail system is what voters want, anything is possible.

So keep the dream alive, and see if your school can contribute to one of the research projects.

Says Hazard: “It’s the only way to make things like this happen.” 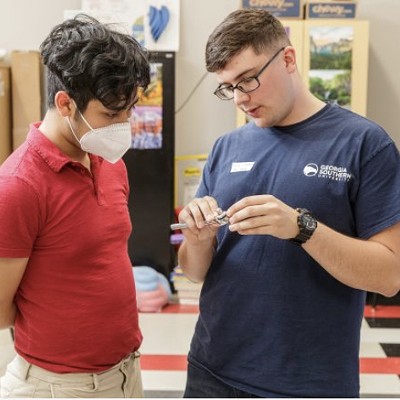