All roads lead to Tara Feis 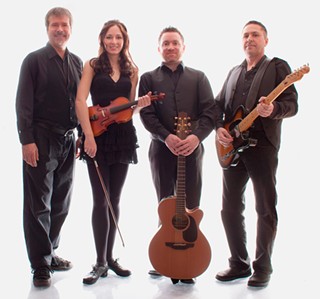 Where: Emmet Park, at the east end of Bay Street

Traditionally, a cornerstone of the “festival of Tara” is the appearance of local dance groups—they’re here in all their Gaelic glory, including the Irish Dancers of Savannah and the Glor na Daire Irish Dance School. Tara Feis is also a showcase for the city’s premiere Irish entertainer, Harry O’Donoghue, who’ll perform alongside vocalist CC Witt and fiddler Coleen Settle. O’Donoghue, one of the organizers of the family-friendly event, will also play a couple of solo sets.

There are two stages at the Emmet Park location, with a combination of storytellers, children’s performers and musicians.

Headlining the mainstage, with sets at 1:15 and 4 p.m., is the New York-based McLean Avenue Band.

For entertainment value, these guys are as good as it gets. “Everybody will have their own perspective on what makes a good Celtic band,” laughs singer, guitarist and bandleader Padraig Allen. “First of all, I would start off with the material you perform, and the way it’s performed. If you deliver it in a true fashion, expressing the value of the song itself. And you express it with a group of people who are very familiar with working with one another, and bring it across in a nice dynamic. If you can get all those elements right, in my eyes you can’t go wrong.”

The band also includes Kevin McHugh (drums/vocals/Uillean pipes), Jessica Semins (fiddle /vocals) and Greg Gruber (keyboards/vocals). Their show is harmony-rich, with songs ranging from the traditional Irish to Americana and even a bit of rock ‘n’ roll.

“There has to be an element of show,” Allen points out. “A lot of the audiences that we perform in front of, they’re looking at you and they want to get energized as they sit in their seats. And every song has a story. Indeed, I do touch off the basic story before I sing it, or even after I sing the song.”

Folklore, mystique, talent, humor and fun all play important roles. A big part of the impact, he stresses, is the presentation.

“If a song is sung by an Irish man, is it an Irish song?” Allen asks. “A lot of Irish songs are American or indeed English folk songs that were made popular by Irish musicians. As many Irish songs have in turn been recorded by American acts, and one would never expect it to be an Irish song.

“You’ve got the Chieftains, Van Morrison and U2. There’s many different styles in those three bands. But it’s all Irish music.”

Allen, who spent eight years singing and touring in the group The Whole Shebang, is indeed an Irish man singing Irish songs. He hails from County West Meade in the old country.

“It’s in the middle of Ireland, dead center,” he explains. “It’s in the heart of the isle. Most folks are familiar with Kerry and Galway ... they’re fishing towns, where there was a lot of immigration.

“Lots more than there would have been from the middle of the country, because, looking back, we had good land and could grow crops and farm. And cattle. So there was more employment.”