Savannah Philharmonic: All You Need Is Love

THE Savannah Philharmonic Chorus has a lot of love to go around.

Led by Dr. Monica Dekle, Chorusmaster, the talented voices of Savannah’s choir will pull heartstrings with favorite numbers like “Danny Boy,” “If Music Be the Food of Love,” “What the World Needs Now,” and more at their upcoming performance, All You Need Is Love. 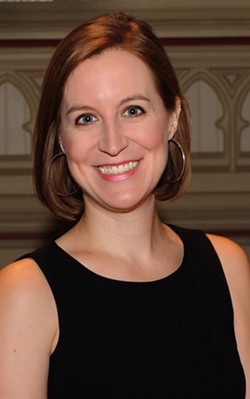 “Peter [Shannon] asks me every year what I’d like to see for the chorus concert,” Dekle explains. “There’s so much turmoil in the world right now and so many hateful acts that I wanted to counter that with music filled with love—what the world needs a lot of right now!”

In creating the program, Dekle selected songs that she herself would want to sing. The evening includes odes to romance from across all genres.

Attendees get the pleasure of seeing student conductor Tenyah Brown, a senior at Savannah State University, lead the Chorus.

“She saw a lot of potential to make a career in music,” Dekle says of the Philharmonic intern. “We threw her in the lion’s den and said, ‘Hey, I want you to try conducting.’”

Brown had previously conducted Savannah State University’s Chorale, but the process was relatively new to her.

“She jumped right up there in front of the whole chorus,” Dekle remembers. “I gave her ‘Moon River’ to conduct and ‘If You Love Me,’ which is very classical, very different, a Capella. She’s done a great job. The chorus is mostly adults—we have a few students—and they have been really good teachers to her, but she’s taught them a lot, too. She is a little piece of dynamite!”

Student Tenyah Brown conducts two pieces in All You Need is Love.

All You Need is Love is particularly special for Dekle as it will be one of her last appearances with Savannah Philharmonic. The prize-winning musician moved back to Georgia, her home, in 2011 to become Director of Music and Organist at Wesley Monumental United Methodist Church. Three years later, she was appointed Chorusmaster of Savannah Philharmonic—the Orchestra’s first.

“For Peter Shannon, handing over the Chorus to me was like handing over his baby—no parent wants to do that!” Dekle says of the Philharmonic’s Artistic Director and Conductor. “But it helped me because he told me, ‘I fully trust you to do whatever you want to do.’ And actually, he was pretty hands-off—he just totally trusted me, which makes me respect him a lot. He’s a great leader and good mentor.”

Dekle is proud of the Chorus’s growth in her time as Chorusmaster. She’ll remain in Savannah, working at Wesley Monumental and building the church’s children’s choir.

“I work very, very fulltime at Wesley,” she explains. “A lot of people don’t realize that the Philharmonic is a second, part-time job. The Philharmonic has grown and is doing very well, and the Chorus division has grown, too.”

She will bid farewell at the end of the season and is particularly looking forward to the Philharmonic’s season finale.

“We’re performing Beethoven Symphony No. 9 in that concert, and the chorus is singing completely from memory in German,” she shares excitedly. “That’s a standout for me...it’s a really awesome piece of music, and singing totally from memory, it’s going to be the greatest thing they’ve ever done. The Chorus members feel that way, too. When people sing from memory, you know the music is in their heart and it comes across to the audience...you’ll sense it coming from the heart rather than from the notes on the page.”

Mark your calendars for Beethoven’s Immortal Ninth on May 5, and warm your soul this weekend with All You Need Is Love.

“People singing about love makes people feel good,” Dekle says. “They are feel-good songs, and a lot of people know them, so they can sing along and leave happy.”