World music, puppetry and electronica in one performance 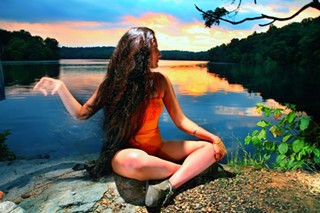 Baltimore's Amy Dang is a sitar player and vocalist who's well-known in avant-garde music circles.

How's this for unique?

Poncili Creacion is a cutting-edge art collective from San Juan, Puerto Rico consisting of twin brothers Pablo and Efrain del Hierro, who express themselves through a variety of media and artistic disciplines. They’re known for their surrealist puppetry, which can take the form of face masks or giant, human-sized abstract puppets. But the brothers’ arsenal also includes all manner of street theater, mime, juggling and performance art. They are all-purpose performers.

Safe//Sound brings Poncili to Savannah, for the first time, July 17 for a house show at 633 E. Broad St. Locals Faeryteeth (singer/songwriter Tara Walters) and electronica artist Jeff Zagers will open and close the show, with a puppet performance sandwiched in between.

In addition to her own lauded recordings and live, global performances, Dang toured Europe in 2012 as Grimes’ opening act, and as her backup vocalist.

CS: When and why did you start to learn sitar?

Ami Dang: I grew up outside of Baltimore. My parents immigrated to the US from Delhi, in the early '70s, and I was born here. I honestly starting playing sitar because my mom wanted me to, when I was 12. She said "I found a teacher who can teach you to play sitar. Is that something you want to do?" I said "Uhhh ... OK." Nobody in my family was a serious musician. I don't come from any sort of lineage of artists or anything like that.

AD: Yeah, it's very hard, and I hated it almost right from the beginning. I hated it. But my mom really wanted me to play. I took lessons and played for three years until she finally said to me "OK, if you really hate it, you can quit," and I jumped for joy!

I came back to it on my own. I didn’t play for a couple years, and then I kinda realized, I think, how interesting it was and how different it was. How unique. And over time I really learned to love it. I still have a love/hate relationship with it because, like you said, it’s a very hard instrument to learn. It’s hard to master. It’s a lifelong journey of learning.

CS: As a teenager, were you drawn to Indian classical music, or was it "I want to play my favorite pop songs on the sitar"?

AD: I definitely was trained classically, and before I started taking lessons I was surrounded by classical music. I grew up listening to whatever music my parents were playing in the house, which was a lot of classical music, light classical music, old Bollywood soundtracks. My mom loved classic Bollywood soundtracks, which were more classical-influenced than anything contemporary. Also, my family is Sikh, so I grew up listening to a lot of Sikh hymns. On religious retreats. Some of them are inspired by classical music; to the western ear, it sounds like classical. In that context, also sacred music. I've always loved to sing, so that was something I could relate to.

When I started playing sitar, I got more interested in instrumental classical music. That also became part of the soundscape around me.

CS: What was the process to get from there to where you are now, with the looping and the vocalese and the improvised soundscapes?

AD: I grew up dancing, taking ballet and modern jazz dance. And I think studying dancing as a child introduced me to music that was more than just pop music. I remember dancing to trip-hop in class. After that, I had a chance to study both music theory and music technology at my high school. I don't think anyone else there really had an affinity for electronic music, but the tools were there; and that was probably the beginning of my starting to do looping and stuff like that.

After going to college, I ended up studying Technology in Music and Related Arts at Oberlin Conservatory. Once I was there, the whole world of avant-garde composition and new music, and indie electronic music, everything was exposed to me at that time.

CS: So what do you and Poncili Creacion do onstage together?

AD: My bass player and I will be accompanying the puppetry show. It's not really a typical set for me; the two of us have been improvising to theatrical movements and emotions and actions. It's been a really fun, different experience to just sit down with our instruments and play. We're not actually using any electronics, we're just playing bass and sitar.