THE WINDOWS on the Barnard Street side of the Jepson Center demand a certain kind of attention.

Nearly eight feet tall, they tower over the people on the sidewalk and can be seen from far away, occupying a commanding presence.

It’s only fitting that the current occupants of these stately windows are bright figures asking people on the sidewalks to listen and pay attention.

“With everything that’s going on, when I was working on the artwork, that’s what just kept coming into my mind: make the figures look like they’re communicating, saying, ‘Hey, we need to do this,’ and push those strong messages out there,” says artist Amiri Geuka Farris.

“Breakout!” is this year’s iteration of the Telfair’s Boxed In/Break Out project, which annually puts out a call for local artists to create a site-specific installation. Farris was chosen for this year’s project.

Farris has plenty of experience working big—he’s done murals for the Starland Mural Project and the Savannah Children’s Museum, as well as a 50-foot mural for the new elementary school on Broad Street—so the size of the windows wasn’t a challenge for him at all.

“I really enjoy working larger because I feel more free; I can express myself a lot more than working on a smaller piece,” says Farris.

Prior to the work for “Breakout!,” Farris’ studio work was verging into the figurative, a fairly new venture for the artist.

“The work I was doing in my studio had a figurative element to it, kind of a graphic element, but then also talked about historic things that African-Americans were going through,” says Farris.

One of those things is the brown bag test, which Farris learned about from his grandmother.

“If your skin is lighter than a brown paper bag, then you can pass in white society and you’re considered more beautiful than if you’re darker,” says Farris. “It seems to affect women more, I think, than men, but it does affect us all.”

Another racist test Farris shared is the fan test, which involves blowing a fan on a person’s hair.

“If your hair blew, then you were considered more beautiful,” Farris shares, “and if your hair didn’t blow, you had more Afrocentric hair, and you would not be as beautiful.”

Farris wanted to pay artistic homage to those outdated ideals, so he collected brown paper bags and cardboard boxes to supplement the idea. “Breakout!” ended up being that project that brought the idea to life in a larger format.

Farris drew on his graphic style as well as his knowledge of color theory to make pieces that were bold and bright.

“A lot of my work, you’ll see those very bright colors, and these works in the windows, I used more analogous colors,” says Farris. “By doing that, it actually makes the work seem brighter.”

Farris’ influences include Andy Warhol, Roy Lichtenstein, and Romare Bearden, and that influence is clear from the work he produces. He’s an avid user of the Ben Day dots, a popular technique in comic illustration, and they make their way to the work in the windows.

Farris also collages together pieces of found materials to create something larger.

“It was also influenced by people that I saw in my own life, so as I collaged the faces together, what I do is I collect different magazines and pictures, so I’ll take an eye from a certain picture, then maybe a nose from myself, and collage them and make them into an original person,” he explains. “A lot of people ask me, ‘Who are the people in the pictures?’ The larger people are collages, but as you look deeper into the painting, you might see a historic roundhouse and Broughton Street. I really wanted to pay tribute to the past, present and future of Savannah.”

Dunn loves that the work has lots of entry points for people to appreciate it.

“I think Amiri’s work is really layered and complex, and there are so many entry points for it,” says Dunn. “You can enter it from seeing that he’s using reclaimed and recycled materials and addressing global concerns of environmentalism, or you can enter it from a place of representation and diversity that he is interested in representing all people, Black and brown faces and showing that power and representation within an institution. You can enter it from a graphic beauty as well; the colors are really beautiful and he’s using these graphic forms hearkening back to other artists, as well as that historical narrative element.”

Moreover, “Breakout!” is a highly accessible piece of art that is visible and available to everyone. Dunn notes that it’s a difficult project to photograph because of the windows’ reflection, so it’s better experienced and understood if seen in person.

“This is a space for you,” says Dunn. “I think it’s using the architecture of the Jepson Center in a nice way, too, because it’s such a space that invites the outside in through the large use of windows.”

As Farris’ “Breakout!” invites visitors to the Jepson Center’s windows, the three Telfair museums will welcome visitors back into their physical spaces on June 26. The museums closed to the public mid-March due to the coronavirus pandemic, and the shutdown saw the sudden departure of executive director Robin Nicholson. Now, Bob Faircloth is the acting director.

As the museum works its way back to a regular schedule, “Breakout!” will be available for everyone to see.

“I hope people would go by the museum and take a look at the works,” says Farris. “Everyone that’s seen it says, ‘Oh, I saw the picture of it and the pictures were really cool,’ but then the actual work, they get a whole different feeling from seeing that.” 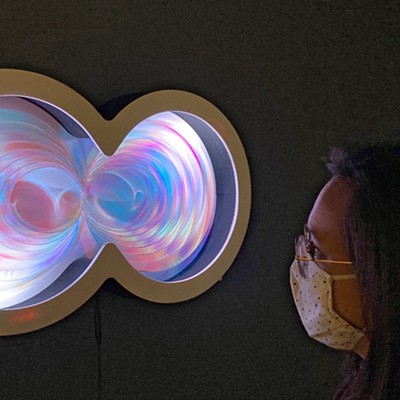