"Echo" is on view through Mar. 21 at Laney Contemporary, 1810 Mills B Lane Blvd. Gallery hours are Tues.-Fri. 11-5, Sat. at. 11-2, and by appointment at info@laneycontemporary.com. Follow Pleasant on Instagram at @amyapleasant.

SUSAN LANEY is doing great things for Savannah’s art scene with Laney Contemporary Fine Art, and continuing that trend of enrichment is their season opener show, "Echo" by Amy Pleasant.

This is the first time showing in Savannah for the Birmingham-based artist, which makes it an exciting chance for local art lovers to experience her work up close.

“I’ve been a huge fan of Amy’s work since I first saw it,” shares Laney. “There’s something about her attention to detail and the subtleties that became not so subtle after looking. I followed her and saw her sculptural work at the Atlanta Biennial [in 2019].”

This show is a big deal because Pleasant herself is a pretty big deal. In addition to participating in the Atlanta Biennial, she was a Guggenheim fellow in 2018, has been reviewed in Artforum and Burnaway, and counts solo exhibitions at Geary Contemporary in New York and Whitespace Gallery in Atlanta, among many others. Her solo exhibition in our city is an exciting moment. 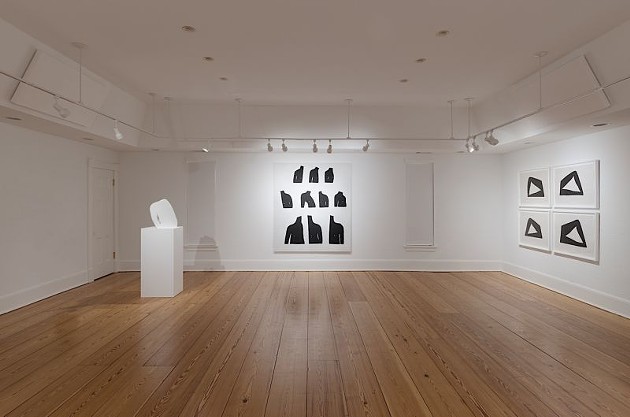 Pleasant is a masterful painter and illustrator, but for “Echo,” she included all facets of her studio practice, which has recently come to include ceramic sculpture, which she taught herself around 2014.

“I have really had this urge to pull my drawings into three dimensions, and I’m really interested in flatness and 2D surfaces. I wanted to make sculptures that were still flat,” recalls Pleasant. “So I just started playing around in the clay studio.”

Each ceramic sculpture is cut from a hand-rolled slab. She likes the imperfection of the clay when she does it herself. The flatness of the sculpture perfectly complements the paintings and illustrations she creates.

A consistent in Pleasant’s work has been the figure. Her simple renderings of parts of the body—a torso, an elbow, a knee—are done in pure black, which proved easy to translate from ink to paint. 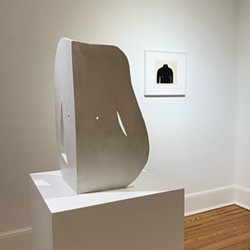 “It was always this path of figuring out how I wanted to work with the figure,” says Pleasant. “I’d say this is all coming from my drawing practice, because my drawing practice was with India ink and brushes. It was very much in this calligraphic style, very simplistic kind of mark-making and creating an entire form out of maybe one brush stroke. That’s always been the way I find my images and my forms, because that then translated into oil on canvas. It was that same practice of, I started working on paintings flat and thinning down my paint so it could be as fluid as India ink. I wanted them to feel really spontaneous and that the images were found on the surface.”

Pleasant is also fascinated with the idea of negative space and how that contributes to the figure. A black torso may have a singular dot of white to represent a nipple, or two legs bent together might rely on the white space between to give context to what part of the figure is represented.

One way Pleasant achieves that effect is by her choice of paint.

“I love working in different sheens, so really matte paint or sometimes shiny paint, and then what it does in space to the viewer, how the light’s catching it,” she explains. “Where the positive that I painted, the torso can almost look like the negative—it almost looks like a cutout or a void or a hole. Visually, it can flip back and forth, which I like.”

Upon closer look of her work, the black colors in her pieces all vary, whether due to the type of paint or the mottling of ink. The variance in color invites a closer look to the pieces, which Pleasant wants.

“We were talking about the importance of slowing down the viewing process in such a fast life we have now,” says Pleasant, “and that’s how I work with forms in repetition. Drawing the same image over and over again is to give an opportunity to see what’s different with these and why does this not feel the same? The longer you look at this, the more you realize the blacks are not the same.”

Pleasant’s repetition in her creative process comes from the inherently quick nature of gouache work.

Another way Pleasant encourages slowing down with her work is her inclusion of a series of sorts.

“I’m really interested in looking at earlier works, like looking at a narrative from multiple perspectives, and then I started zooming in more into an individual image and thinking about it as a crude animation in a way, how the body moves and the different perspectives you have on it,” says Pleasant of the work that hangs in the hallway, which just represents a torso in the act of turning. “It’s seeing them across from each other, still a series but broken.”

Recently, Pleasant published her first monograph, “The Messenger’s Mouth was Heavy,” by Institute 193 in collaboration with FRANK and Michael Aberman. The book is on view as part of the exhibition, and Pleasant will give an artist talk and book signing on Mar. 20.

Laney’s partnership with Pleasant provides a unique opportunity—not just for the gallery and the artist, but for Savannah’s art collectors and lovers.

“Here at the gallery, one of our missions is to connect people with work they love and present work that we love, because that’s the best way to make those connections,” says Laney. “I’m passionate about her artwork, and I think that Savannah will find it something they haven’t seen before, unless they’re already familiar with her work.”