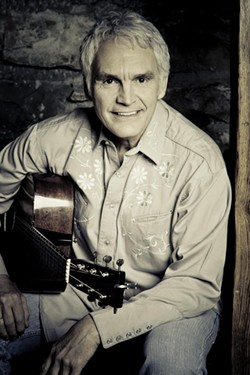 SPEND Friday night with an American songwriting star. Binger, Oklahoma native Verlon Thompson has made a name for himself co-writing and touring with icon Guy Clark; now, Thompson’s taking his own show on the road, playing solo up and down the East Coast.

You may not know Thompson’s name, but you have more than likely heard his songs: the talented musician is a prolific songwriter, having spent the last 30 years penning hits for Jimmy Buffett and Alan Jackson, Nitty Gritty Dirt Band, Dierks Bentley, Kenny Rogers, Trisha Yearwood, Pam Tillis, Del McCoury Band, Hal Ketchum, Tracy Byrd, Sam Bush, and many, many more.

He’s also an in-demand guitarist and flatpicker who’s recorded with the likes of Restless Heart, Pam Tillis, and, of course, Guy Clark. In addition to touring, performing and recording with Clark, Verlon co-produced the Grammy-nominated album Cold Dog Soup, as well as The Dark, Workbench Songs, and Somedays the Song Writes You.

Thompson’s carved his name into the Nashville scene thanks to a lifetime of hard work it’s high time Savannah starts talking about him, too.