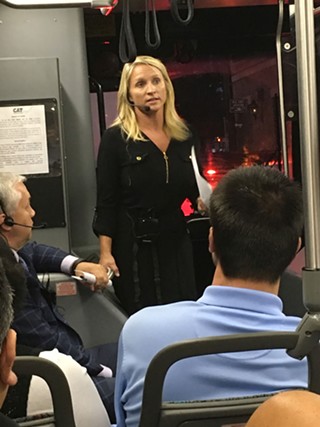 THE MONTH of fright is underway, which means half the city is doing its best to give me a heart attack.

Between massive spider webs stretched across driveways and skeletons dancing in trees, it’s really starting to look like Creep Town around here, which is excellent.

I do so love Savannah’s early enthusiasm for Halloween, even if I’m kind of afraid to walk the dog past the nice yellow bungalow on the corner that’s been transformed into the Shrieking Shack.

Regrettably, there’s a lot more to be scared of in real life than any moaning goblin yard decoration.

We’ve got masked shooters on the loose, multiple government agencies haunted by scandal and some seriously misguided mad science about to go down on Elba Island.

Even deeper into the darkness looms a human trafficking industry that’s harder to get a handle on than a zombie on flakka.

The issue first came out of the shadows in 2014 when Operation Dark Night busted one of the largest known trafficking rings in Georgia history at a Southside home, sentencing 23 people to prison and rescued a dozen young women from an indentured horror that had them performing as many as 40 sex acts a day.

But that hardly made a dent in the form of modern slavery that Georgia Public Service Commissioner Tim Echols calls a “scourge for the state.”

The hideous business that has made Atlanta one of the FBI’s top American cities for child prostitution continues to find its way to Savannah, lurking on the outskirts and often hiding in plain sight.

“Between the port and I-95, what we have here is a pit stop for traffickers,” explains Echols. “They bring girls into Savannah and rent a hotel room for a few days, line up a bunch of customers, then move them up and down the interstate. It is a major criminal enterprise.”

According to a Center for Public Policy Studies report, more than 100 underage girls are under the control of traffickers any given day in Georgia, which also has the highest number of trafficked Hispanic females in the country.

More than 7,000 men buy sex from minors every month across the state, and several dozen local arrests in the last year show that sexual exploitation (of girls and boys) is still plenty of people’s favorite effed-up pastime.

It’s a rat’s nest that intersects with street drugs (Echols estimates that 80 percent of trafficking victims are addicted to heroin or meth), illegal immigration (victims are often lured across the border with promises of a job then conscripted into an inescapable hell) and child protective services (pimps will intentionally impregnate young women in order to fetch a higher price from fetishists and use the children to manipulate their mothers.)

I had the opportunity to get up and close and personal with this monstrous menace recently, when Echols brought the Unholy Tour to town. First implemented in Atlanta, these organized bus cruises invite lawmakers, social workers, advocates and other local activists to see where human trafficking happens in their communities, sometimes in surprisingly mundane places. They usually have waiting lists, and I was glad to hop on behind Alderman Van Johnson, Rabbi Robert Haas and Gulfstream community investment consultant Miriam Hodesh.

As the CAT buses rolled out of the Coastal Georgia Center towards downtown, Unholy Tour co-founder Kasey McClure introduced herself as an ex-stripper who now runs the ministry 4Sarah to help women transition out of the sex industry. She helped unite a 14 year-old last year with her family after the girl’s grandma recognized a tattoo on Backpage.com, which she calls “Craig’s List for sex offenders.”

McClure often spends her days calling the women posing in lacy thongs and advertising “big booty pleasures” to offer nonjudgmental outreach, educational opportunities, and if needed, immediate rescue. She even made a call on the bus to one such number, asking the sultry female voice on the other end of the line, “Are you safe? If you can’t talk now, you can text me at this number anytime.”

Such brief attempts can provide a welcome way out for those trapped in hotels like the ones we pass on Bay Street, where trafficking increases during big events like St. Patrick’s Day. We looped around Lathrop Avenue, where the neon lights bring out the creeps as well as another ministry called the Savannah Sunshine Girls, who bring hot meals and unconditional love to those working in local strip clubs every Thursday night.

The bus barreled along through Garden City and Pooler, slowing down so that McClure could point out the skeevy truck stops and cheap motels, including the Red Roof Inn from where a 17 year-old escaped in late 2014 after being held against her will by a couple who sold her for sex.

Unfortunately, the giant Parker’s ad wrapping around the bus made it almost impossible to see through the windows.

But it didn’t take looking at a crappy metal door to imagine the fear and hopelessness behind it as Youthspark’s Jennifer Swain and Diane Mcleod of the Chatham County DA’s office described tale after tale of abuse. Claustrophobic and carsick, I spent most of the the three hour ride trying not to puke or cry.

I began to feel better when Deirdre Harrison of Savannah Working Against Human Trafficking (SWAHT) stepped to the front to discuss what we can do to help quash this demonic phenomenon.

First, we must vote “YES” on Amendment 2 this Nov. 8 (yup, there are other issues that need your support besides keeping General Zod and his horrible hair out of the White House.) Amendment 2—aka the Safe Harbor Bill—authorizes penalties on convicted sex offenders and the places they frequent, collecting them into a dedicated fund for victims of child sex trafficking.

Second, pay attention. While SWAHT provides what Echols calls “sector specific training” for hotel staff, Uber drivers and others who might encounter trafficking situations, all of us can take notice of a young person who seems frightened and out of place.

Are they with an older companion who does all the talking? Are they strung out or unable to tell you where they live? Do they seem unable to come and go freely?

These are some of the red flags listed at National Human Trafficking Resource Center, but refrain from acting out your savior fantasies lest you put the kid or yourself in danger.

While someone on the bus reminded that no one under 18 can legally be charged with prostitution, many victims of sex trafficking end up in jail, where they’re fined and thrown back out onto the streets. Some came into the life as teens and have been beat down physically and emotionally for so long that they can’t envision any other way to survive.

As my buddy Kenneth Brown of Park Place Outreach teen shelter called from his seat, “a lot of these people don’t have lights at the end of their tunnels.”

Instead, we must call for the onus to be placed on the real criminals: Those who benefit from sex trafficking and those create the demand. Thanks to Attorney General Sam Olens, Sen. Renee Unterman and Rep. Edward Lindsey, Georgia passed some of the toughest legislation in the country in 2011 that can put away traffickers for life, but those caught paying for sex still dodge serious consequences.

Echols is adamant that this must change.

“Wherever there are men, there are sex traffickers,” says the father of seven. “Men are the customers. That’s who’s paying for sex with kids.”

Last stop, Tibet Ave: The bus pulled down a quiet residential street where FBI, immigration and a host of other cooperating agencies took down the trafficking kingpin known as El Diablo during Operation Dark Night.

Peering through the tiny holes in the window wrap, I could barely make out a vinyl-sided trailer with a sagging porch.

“There were dozens of girls in there, and men would line up outside all night long,” says SWAHT’s Harrison, shaking her head. “It went on for years.”

As the bus revved to trundle back down Abercorn, I looked back, acknowledging with a shudder that a place doesn’t need any decorations to be the most terrifying house on the block.

*Correction: In last week’s column about the library, it was mistakenly presented that there is only one Chatham County Commissioner with a criminal record. There are two. 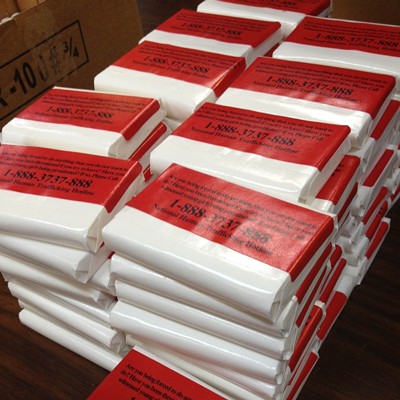 More »
More The (Civil) Society Column
All Community
Comments (3)
Add a comment
Subscribe to this thread:
By Email