Ampersand is the latest downtown performance space to close its doors, and creatives must get creative

OVER three years, Ampersand’s antique floorboards have been scattered with glitter, feathers, guitar picks, sequins, swizzle sticks, the occasional bobby pin, fallen from a wig. The three-story restaurant/club/venue has opened its doors to countless performers, from rock stars to drag queens to comedians. On July 30, its doors will close for good.

July 14’s social media announcement was met with sorrow and many crying Emojis. As a destination for college students, the LGBTQ community, and artists, Ampersand offered a place to gather, dance, dine, drink, showcase visual artwork, and perform. It was one of the last multipurpose spaces in Savannah’s Historic District hosting a variety of entertainment and readily embracing the experimental and avant-garde.

From wild dance parties to burlesque shows, business was booming.

Reese and his team have a huge final week of fun planned, but after 36 Martin Luther King Jr. Boulevard turns over its keys, many creatives are wondering where they’ll find another a downtown space that can host theatre, classes, burlesque, music, and epic DJ nights.

“We’ve supported the DJ scene and given a ton of local DJs their start,” says Reese. “I think we tried different things and took a different avenue. I think it appealed to a lot of people because, when you go down Congress, you see a lot of the same stuff going on. We always tried to stand out.”

“Any given night, you’d have a DJ in the basement, on the next floor a drag show, on the third floor a tango or salsa night or theatre,” explains The House of Gunt’s Max Arnzen (Influenza Mueller). “They were really open to that, and that was the best thing about it. That’s what’s happening with these spaces sadly going away; they had this sort of collaboration with the community. ‘You want to try something different? Great!’ They could see there was a value in that instead of sticking to one aesthetic and one clientele.” 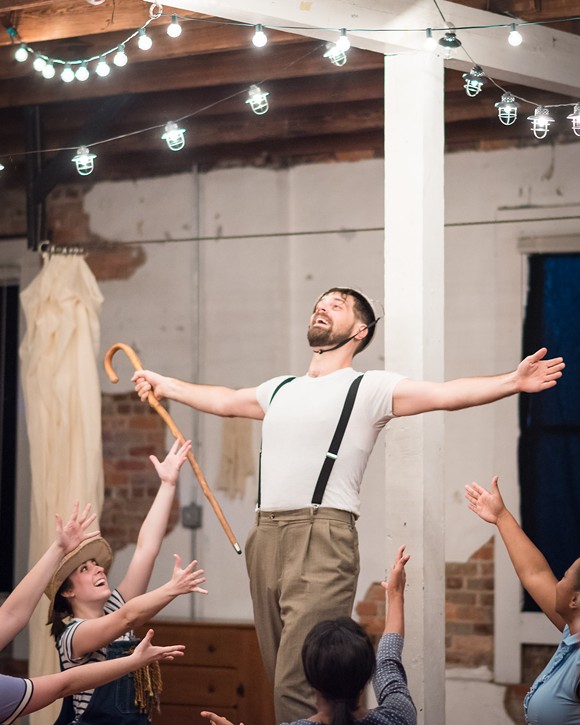 For the past two years, Ampersand’s third floor was Savannah Stage Company’s mainstage.

“It’s the first place that felt like home,” says SCC Artistic Director Jayme Tinti. “It has given us stability, a place downtown. Ampersand and their staff did so much to help push our shows online. It gave us an opportunity to lay down some serious roots and build an audience—because we didn’t have one two years ago.”

From rehearsals to improv camp, the third floor has been a haven of creativity and learning for the company. Even during the restaurant’s closing hours, SCC had their own key and used their floor to teach youth the joy of performance.

The Savannah Sweet Tease Burlesque Revue valued the Ampersand stage as a place they could test out new and different shows. “1, 2, 3, Tease,” the Ampersand-exclusive burlesque game show, was a hit. With the restaurant downstairs, the troupe was able to put on "A Sweet Rendezvous," a black tie affair with a three-course dinner and live entertainment.

The House of Gunt made its Ampersand premiere in 2014 for “Transcelestial Vibrations,” a collaboration with DJ showcase Cape Fear that interspersed drag performances with DJ sets. The House has thrown many an Ampersand show since.

Matt Slade
The House of Gunt and Savannah Sweet Tease Burlesque Revue teamed up for Disney Whirled, a co-production with dates at Ampersand and The Jinx.

Though Ampersand did not consider itself an “official” gay bar, its welcoming environment made it a beloved destination for the LGBTQ community to dance, DJ, perform, and commune. Connect Savannah readers even voted Ampersand Runner-Up Best Gay Bar in the 2016 Best of Savannah Awards, second only to Club One.

“It’s funny,” Reese says. “I don’t think there is such a thing as a gay bar anymore; I think, especially in downtown Savannah, most places are pretty safe for LGBT. The thing with Ampersand and what we’re trying to achieve is really just to be open to all. We didn’t discriminate against anybody or anything.”

In the same way that many performers are now looking to nontraditional spaces—establishments that may not be performance-oriented, but can become temporary stages with flexibility and open-mindedness—LGBTQ nightlife is finding a home in spaces that might not identify outright as gay bars.

“The only conventional space that’s safer is Club One—which has always been there, and it’s great,” says Arnzen. “But I think for queer people, it’s never enough. The gay bar, you should always be thankful that there is one, but sometimes you’re like, ‘So, what else is there?’”

For a long time, Hang Fire functioned as House of Gunt’s “mainstage.” Its versatile room and welcoming environment, like Ampersand, made it a favorite location for LGBTQ folks and young people. When it closed last year, much of its clientele headed west down the Congress strip to Ampersand.

“That’s what The House of Gunt was born out of,” Arnzen explains. “It was not about creating a space...it was more about taking that space and injecting the queerness, the feminism...into these spaces that are neutral. Having to find a bar where you feel comfortable, where other queer people feel comfortable, it’s always been about trying to figure out where that can be. And surprisingly, that happens in spaces that aren’t gay bars. It happens in spaces where the owners are willing to experiment and see the benefit in that. They’re not completely turned off by the idea of having a diverse demographic.”

“Savannah in itself, when it comes to safe space for community, we’re limited,” says Ampersand bartender and Savannah Sweet Tease co-founder Anita Narcisse. “I feel like having establishments like [Ampersand] is a way of telling the community, ‘We’re not going anywhere. We won’t be intimidated.’ You also have straight women who find themselves in these spaces because it’s somewhere they can go and not be harassed.”

“I know that some people would say, ‘Why not just go somewhere else?’” she says. “Sometimes, it’s just not that simple for a lot of us. You have to take into account recent events, like Orlando. There was even a huge group outside Ampersand one night trying to start a physical altercation based on hate toward the gay community. Even right outside our safe space, there was something.”

Many creatives and entertainers consider Ampersand to be the last venue of its kind in the Historic District. For a nonprofit like Savannah Stage Company, it offered both affordability and downtown convenience; now, they’re looking toward the Starland District and gallery spaces for improv shows and theatrical productions. Tinti is embracing the positive: SCC’s latest show, The Wizard of Oz, has been such a hit that the Ampersand attic can’t quite hold their growing audience.

“At this point, we are turning people away because there aren’t enough seats available,” she says. “We are thinking of this as a graduation for us.”

The Sweet Tease still keeps The Jinx as their home stage, but they enjoy variety, and hope to continue “1, 2, 3, Tease” in another welcoming space.

“The burlesque we do does not necessarily appeal to the male gaze,” Narcisse points out. “And people loved our game show. We want to take time and weigh options, if there are any, for a place that’s going to accommodate our concept.”

Narcisse, a native Savannahian, is concerned about the lack of business interest in cultivating entertainment and nightlife.

“A lot of people are making decisions based on what will generate revenue,” she says. “That’s what business is all about, but there really aren’t any business owners in nightlife that support the arts enough to believe in it and fight. There are very few with that soul, like Susanne at The Jinx, or Wes who was a partner in Hang Fire, and Amy at The Wormhole. Our music scene isn’t going anywhere; it’s the performance art scene like House of Gunt and us who are fighting wholeheartedly to stay.”

Arnzen hints toward possible collaborations with new downtown bars; The House of Gunt is also feeling out Starland and the surrounding areas as a place of growth. In Arnzen’s few years in Savannah, he’s seen plenty of turnover.

“I don’t know where we go, because not much has changed; this is the same struggle every day,” he says. “Hopefully, we can put ideas into a new space in the city.”

Innovations in LGBTQ nightlife, like Lesbian Pop Up Bar Savannah, which takes over a different venue each month, offer promise for downtown diversity.

With a rich arts culture and so many innovators, finding fresh stages may be a challenge, but the creators will prevail. Ampersand is glad to have been a part of it.

“A lot of people say Ampersand wasn’t a bar, but a culture,” says Reese. “We definitely tried to open a space where people felt safe to do stuff a little differently and accept everybody from all walks of life. It was a safe place to go. We were around almost three years to give the community that space, and we appreciate all people who have been our patrons. Thanks, Savannah.”