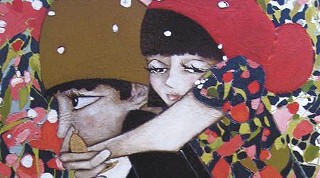 While Savannah's reputation as a creative city has grown steadily over the past decade thanks to the presence of SCAD, the Hostess City is starting to welcome an increasing number of artists who are attracted to city's charms without the usual ties to the art college. So as we ride the metaphorical bike down the path toward establishing an ever-growing creative class, a group of 20 to 40-somethings who make a living off their artistic talents, the city is getting grown up enough to make progress without SCAD as its training wheels.

About six weeks ago, painter Casey O'Connell arrived in Savannah without any fanfare or unfurled red carpets. A native of Gainesville, FL, O'Connell attended Flagler College in St. Augustine before moving to New York and suffering through years of rejections from galleries before moving to San Francisco five years ago.

There she finally managed to catch several significant breaks, first as an artist in residence at Start Soma, then painting a room in the Hotel Des Arts that was glowingly reviewed by the New York Times, and last but not least, a solo show at Google's Bay Area headquarters.

With things finally coming up roses, it might have seemed like a strange time to pack up and move clear across the country, but her boyfriend had found a job here, and she has no regrets about following him to Savannah.

"It was supposed to be a temporary move," she says. "Now I don't know. I've fallen in love with the place."
After the notoriety that followed the Times write up and the Google show, O'Connell now sells most of her paintings thanks to commissions from interested individuals. So while she isn't drawing inspiration from the Lowcountry's scenery, she is finding the pace of life better suited to her temperament.

"I have room to really be in my own head and not be so focused on what everyone else is doing," O'Connell explains. "I just like the relaxed feel so much here. I think it's more genuine."
Besides losing the frantic pace of a bigger city, she is also glad not to have to worry so much about the cost of living in the midst of economically challenging times.

"The majority of my friends just aren't surviving right now," she says. "So when I tell them about here, I'm like first of all, everyone just has barbecues all the time and hangs out. For what we were paying for a studio there, it was half the size of this two bedroom house and a porch."

She's enjoying it so much that after settling into their bungalow, she and her boyfriend went out and got a boat so that they could spend more time on the water.
The laidback pace of life in Savannah is drawing in professionals who yearn to spend more time fostering their creative side as well.

"It's truly the anti-L.A.," says Buck Drummond with a smile. "I can walk everywhere I want to go. I know my neighbors. People are friendly. It was just the right move at the right time."

Drummond relocated to Savannah from Los Angeles about a year ago, and although he came here without a job or a place to live in order to make more time to pursue art, he has managed to get comfortable relatively quickly. A veterinarian by trade, he found a job with the Central Animal Hospital in the Starland District and is now preparing for his first ever art show, which opens this week at Smitten, a hair salon and gallery on Abercorn just south of Lafayette Square.

"When people hear I'm a veterinarian and I paint, they often make the erroneous assumption that I paint puppies and kittens," says Drummond. "I do not."

His work is built around re-purposed boards and other pieces of wood, which he then reconstructs into forms that explore abstract, organic forms through the knots and grain of the wood pieces.

Completely self-taught, Drummond has toyed with the idea of art school, but for the most part, he is simply glad to enjoy the "artiness" with which Savannah is infused by the influx of artists and students.

"Every little shop or restaurant displays art. We display art at the veterinary clinic," he says. "It's everywhere, which I think is really neat. I think people are really ready to think of anyone as an artist here."

While he enjoys being a veterinarian, with his first show about to open, Drummond is more than ready to don the mantle of artist himself.

"Would I like to see art take over more of my life? Absolutely," he says. "That was the whole point of picking up and making this big move. I didn't move here because I got a job. I moved here without a job specifically to do art. I was lucky to find a great job that working out well for me."

Drummond's evolution toward artist, displaying his work at Smitten, is in part thanks to another recent creative transplant to Savannah, thanks to the salon/gallery owner Joseph Middaugh.

Middaugh moved to Savannah from Seattle with his wife a little over a year ago, and hasn't looked back since.
"I always wanted to be back down in the South. I'm a Southerner, and I was raised by a Southern woman," Middaugh explains. "I feel more at home here than I do back in Seattle...I don't want to say it's like a prodigal son, but it's similar."

A 15 year veteran of the salon circuit in both Atlanta and Seattle, Middaugh was drawn back to Savannah in part because of an interest in attending SCAD to study painting, a creative outlet he picked up a few years earlier.

"You know when a writer has writer's block and they stare at blank page?" he asks. "For me it was the same, I didn't know how to get past a white canvas. It was already perfect. But once I got past that block, the flood gates opened."

Opening his portfolio to reveal a variety of work ranging from abstract studies of color and texture to mixed media pieces involving intricately detailed maps, Middaugh, who is also self-taught, explains that most of what he knows as an artist he learned from cutting hair.

"Color theory, concepts, all the same principles that apply to paint apply to hair so after 10 years of doing hair I started painting on canvas," he says.

When he came to Savannah, his intention was to further develop himself as an artist while studying at SCAD, but with the economy looking dire, he thought the money he would have to spend on an education might be better used to invest in his own business.

And while cutting hair might be his trade, he wants to share his passion for art with the community as a whole.
"I didn't want to just be known as a hair salon, I want it to be a community," he says, and he's excited to have Drummond premiering his work there. "That's the fun part, being able to find new talent and new artists, that's what this is all about."

Even though he's only had the space open since May of this year, word is already spreading, after Drummond's show ends in November, he's already got artists lined up for shows through spring of next year.

"The amount of talent that's coming to this town from other places right now is just awesome," Middaugh says. "Savannah has been here forever and a decade, but with all the talent moving this way, it's really impressive. It's cool to be one of those people coming here."