All came of age about the same time, in the early ‘80s, and all brought the same tight, almost punkish intensity to a metal genre that many felt had grown a bit staid.

The first three are West Coast bands, but Anthrax brings a gritty, everyman New York sensibility to the stage.

They play June 13 with openers Testament at The Stage on Bay.

As we speak, Anthrax and Testament are also embarked on the massive and much-anticipated Slayer farewell tour, a monster bill they share with Lamb of God and Behemoth (with Napalm Death replacing the latter on one leg).

We spoke with Anthrax bassist Frank Bello right before one of the big concerts in the Northeast, their old stomping grounds.

What’s it like to be on the farewell tour of a band you’re so closely associated with? Is it bittersweet or more of a huge party? 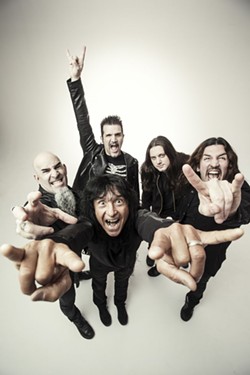 Frank Bello: The whole tour's a party! Sure, it's a little bittersweet . But you know, at the end of the day there will always be a Slayer.

We’ve been friends with these guys a really long time. Of course this tour’s booked up through December, so we’re not saying goodbye to them anytime soon. But we’re having a great time together.

The reaction to this tour has just been insane. It feels like the tour of the summer. There’s a real festival vibe at these shows.

This is actually our first time meeting Behemoth. I really like that band, they are great guys making great music.

And the dates we’re doing with Testament are a great way to keep the tour going when Slayer’s off.

On this Slayer tour you’re with four other bands though. What kind of set list are you running with?

That’s the hard thing about our catalogue. It’s so big but we only have 40 minutes onstage with the Slayer tour. There are five bands and everybody’s got to get their slot, get their time.

We just really hit hard and then leave. It’s 40 minutes of complete energy. There’s not enough time to even take a drink! It’s just a big punch in the face, give it all you got.

In Savannah, we’ll be headlining, so that’s of course a longer set — anywhere from an hour and 20 minutes to an hour and a half. It’ll be a real satisfying mix of songs. 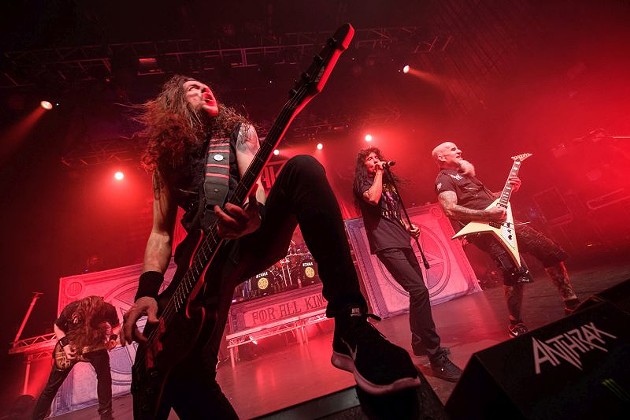 You’re obviously comfortable being mentioned in the same breath with “The Big Four.” But Anthrax always stood apart. You have a more melodic sound, especially with Joey Belladonna’s voice.

The thing about that is, all the bands in The Big Four all sound different. I mean, it’s all under the umbrella of metal, but each band, each one of us, has their own individual, unique sound.

We hear that thrash metal comes from punk, but when you talk to old school thrash guys they are as likely to say their biggest influences are bands like Kiss and Aerosmith and Cheap Trick. Is the punk angle overrated?

Just speaking for ourselves, we came from all of that. It's all good! All that stuff makes you who you are. Growing up we followed lots of great bands. It's just great music, man, filled with intensity and really satisfying.

The band released a new live DVD, Kings Among Scotland. The set is tight—you've still got an edge.

We never got away from that edge. We're an angry band! We're a blue collar, angry band. We've never taken our foot off the gas pedal.

We’ve tried a lot of things, but that’s just who we are. As songwriters, as performers, we never say never in trying new things.

But this DVD really captures the Anthrax live show. The thing I noticed in the final edits is how incredible the sound quality on it is.

What accounts for the ongoing popularity of your music?

Loyalty. Straight up loyalty. Anthrax has an amazing fan base of people who are not only loyal fans, but fans of this kind of music. They’re all a part of the great big worldwide community of metal.

It’s an aggressive music. It satisfies a gut feeling of angst we all have. A great metal song can make you feel great.

A case in point is that entire Big Four tour we did in 2011. There has been a whole turnover in the fan base for Anthrax. We see it right in front of us every night.

We have people from 10 years old to people in their 60s. Fathers bring their sons, mothers are there with their daughters. We see it everywhere we go.

And if you look at the numbers on this tour, people are coming out in droves. We are selling out some really big places. I’m happy to say that metal is alive and well!