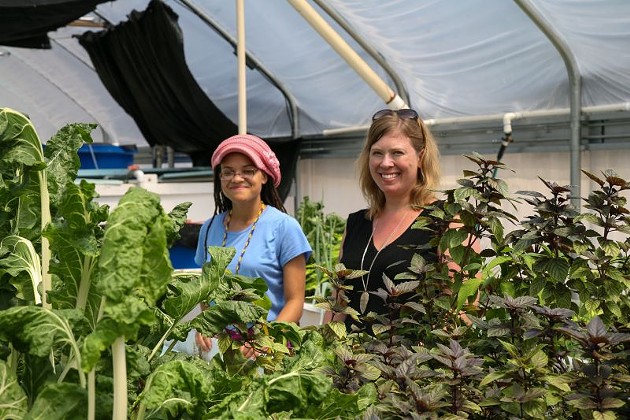 If you create an affordable system that not only grows tasty fish but also a variety of fresh produce using no soil and a fraction of the water of traditional farming, you could feed generations.

That’s the goal of the FORAM Sustainable Aquaponics Research Center (SARC) at Armstrong State University, a 4100-square-foot greenhouse on the north edge of the campus that contains four 900-gallon tanks swimming with tilapia and several “runways” bursting with Swiss chard, green onions and herbs. The air is swampy and smells of cilantro and basil, and the faint electrical hum can be heard throughout the clear domed building.

“These guys ought to be ready for harvesting soon,” says SARC director Dr. Brent Feske, pointing to one of the burbling tanks where a hundred or so fat fish swirl excitedly in advance of their morning feeding. “Each tank is in a different phase.”

Applying techniques practiced by the ancient Egyptians and plain old gravity to pump the wastewater from the fish tanks to the grow beds, the system fertilizes the plants without the need for soil. The plants suck up all the nitrates and other nutrients from the fish waste and clean the water, and electric pumps circulate the fresh water back to the tanks. This closed loop uses an estimated five percent of the water of traditional agriculture and can yield bigger specimens of fresh vegetables in less time.

So why hasn’t the farming world switched over to this miraculous practice?

“The problem with aquaponics is that it’s not cost effective yet,” says Dr. Feske, who also serves as associate dean of the College of Science and Technology. “Between the electricity bill and the fish food, farmers can’t sell enough to make a profit.”

That’s the issue SARC is tasked with solving. He and curator Dr. Heather Joesting are currently overseeing a slew of research projects on the economic viability of aquaponics, from reducing oxygen delivery pump use to exploring the idea of growing crickets, algae or other potential food sources to feed the fish. 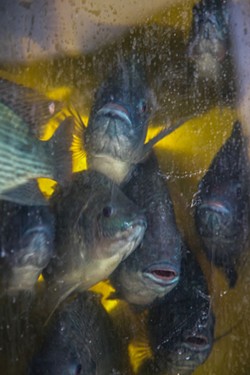 Photos by Jon waits /@Jwaitsphoto
Almost ready to harvest, these tilapia were raised in a closed loop that uses fish waste as fertilizer to grow fresh vegetables.

“As far as oxygen circulation, we’re tracking growth and biomass to see if it’s necessary for plant growth,” says Dr. Joesting. “If it’s not, that could significantly cut down on the electrical costs of running the pump and make the process more efficient.”

The scientists also learn from their setbacks, like when a parasite killed off most of the first batch of fish, leaving just 12 out of a few hundred. The problem was corrected by introducing UV sterilization into the filtering process, reducing the opportunity for pathogens to spread.

“It’s like a college dorm,” laughs Dr. Joesting. “When one gets sick, they all get sick.”

Chemistry and Biology professors respectively, Dr. Feske and Dr. Joesting invite their students to volunteer in the greenhouse as well as students from the Economics and Engineering departments for course credit. The students help assistant curator and “fish expert” Ashley Marranzino clean the tanks and feed the fish as well as conduct experiments that have real world applications.

“My main interest is the sustainability factor,” explains Olivia Roddenberry, a third year biology student who spends four to five hours a week in the greenhouse. “I’d like to take this into the farm-to-table world, maybe a company or a non-profit that is making fresh food accessible to urban neighborhoods and addressing food deserts.”

A former respiratory therapy major, Roddenberry switched academic tracks after learning about the possibilities of aquaponics.

“I realized I didn’t like people nearly as much as I like plants,” she says with a grin as she examines massive leaves of red chard.

Another biology student, senior Sakile Johnson, saw a flyer for SARC and decided to put her childhood gardening experience to work in the grow beds and tilapia tanks.

“I grew up in a family that cultivated a garden, so I was interested in learning how to grow food on a larger scale and how the fish fit into that,” says Johnson. “The heat of the greenhouse can be intense in the summer, though. You have to steel yourself.”

The center is made possible by a grant from the FORAM Foundation, and its leaders hope that other entities might consider partnering with SARC in its efforts to make the facility itself more sustainable.

“It’s just begging for solar,” notes Dr. Joesting of the greenhouse’s proximity to open space. “We’ve been talking with a local company that may donate the panels.”

“We expect it to be a smooth transition,” says Dr. Feske.

Though the produce and soon-to-be-harvested tilapia will be sold to Armstrong faculty and students, it will be some time before the enterprise begins to pay for itself, and even longer before the scientists crack the code at making aquaponics profitable for the masses.

But with a hungry planet to feed, figuring out how to grow affordable clean protein and fresh vegetables with less water may be one the future’s most important scientific endeavors.

“Everything we do here produces something we can eat,” reminds Johnson. “That’s a great place to start.”