A REMARKABLE grassroots effort to improve one Savannah neighborhood, Ardsley Park, has the potential to be a model program for every neighborhood in the city, organizers say.

Over the course of six weeks this past October and November, over 100 volunteers canvassed every block of the 400-acre-plus Ardsley Park neighborhood, exhaustively noting items of concern ranging from the pressing — such as broken pavement — to the cosmetic, such as faded signage.

“This kind of effort has never been done on this scale in Georgia before in an all-volunteer effort,” says Nick Palumbo, president of the Ardsley Park/Chatham Crescent Neighborhood Association.

The volunteer effort was accomplished with technical help from Bike Walk Savannah (formerly the Savannah Bicycle Campaign), with a five-point spectrum of goals: Bikability, walkability, safety, community, and beautification, along with a philosophy of how to tie all those together. 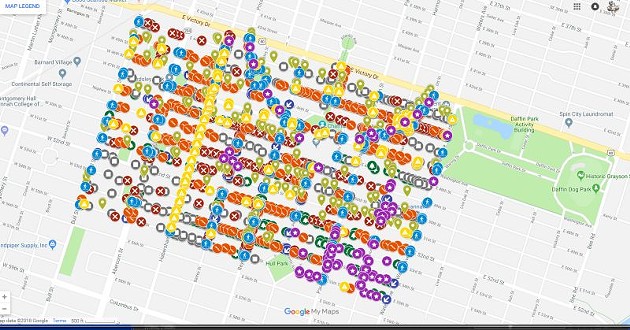 A screenshot showing the remarkable density and variety of the citizen-spotted items needing improvement — over 2,000 total discovered during the six-week canvassing period.

The result is a densely detailed Google Maps document with more than 2,000 site-specific recommendations for individual neighborhood improvements.

“This illustrates that Savannah does a good job of maintaining parks and homes, but one element is lacking far behind: Basic infrastructure needs,” says Palumbo.

The volunteer notes were divided into things that the neighborhood could accomplish on its own — such as planting trees and addressing overgrown vegetation — and things which will need the assistance of City government, such as adding or modernizing sidewalks.

“We’ll bring those to the City’s Chief Development Strategies Officer and try to help come up with strategies of how to fund the improvements,” Palumbo says. “I don’t like to just put something across someone’s desk without also offering a solution.”

The whole idea came from a safe schools conference this past summer held at East Broad Elementary.

“One of the folks there was explaining how to conduct a walk audit — how to do an assessment of a neighborhood,” says Palumbo. “I figured, why not try that in Ardsley Park? I didn’t know that we’d be able to pull it off, but it turns out we did have enough volunteers to cover the whole neighborhood.”

After taking the idea to the neighborhood association board and, in Palumbo’s words, “hammering out what would be good for the neighborhood to do that wouldn’t be too subjective” to be practical, the effort was off and running — or more accurately, walking.

Many of the Ardsley In Motion findings are interesting.

For example, Palumbo says, “The Habersham bike lane doesn’t have a bike lane symbol painted in it — it has the High Occupancy Vehicle symbol. I suppose the HOV symbol is technically correct because it’s an alternate use, but it would be better to more clearly identify the bike lane.”

Some old Neighborhood Watch signs in Ardsley Park have been up so long, “they’re now vintage collector’s items,” laughs Palumbo. “I’m not even sure how much good they do anymore.”

The fact that Ardsley Park — one of the most affluent neighborhoods inside city limits — is in such dire need of infrastructure improvement, Palumbo says, just increases the urgency that the pilot program be extended to less fortunate Savannah communities.

“We’re planning on packing all this up and releasing it as a toolkit for other neighborhoods to use,” Palumbo says.

“This demonstrates that you can do it entirely on your own. You don’t need the City to do it. And you have technical expertise from nonprofit organizations. This is entirely resident-driven.”

Bike Walk Savannah has applied for a grant to replicate the program throughout Savannah. Another grant application, spearheaded on behalf of the Charles Ellis PTA by Denise Grabowski, is a finalist for a grant to help make school routes in Ardsley more safe.

While Ardsley In Motion made a deliberate effort to stay away from making traffic calming suggestions, to a certain extent the effort does tie into the larger goal of introducing more traffic calming.

“Traffic calming was probably the seed that planted all this, but we decided not to pursue traffic calming recommendations because that process already has a backlog many years into the future,” Palumbo says.

“It’s so deeply underfunded that we didn’t want to put too much time and energy into a situation where we won’t even be able to get an assessment done four years into the future,” he says.

“The current process is very myopic.”

Palumbo, who is wrapping up his term in office as neighborhood association president, is interested in innovative — and possibly controversial — ideas to fund neighborhood improvement in Savannah, for example, issuing bonds.