Are we heading back to 25-year lifespans because germs are invincible?

I read that mankind will soon lose its handle on disease management—that vaccines and everything else will fail because evolution is faster than invention. Are we heading back to 25-year lifespans because germs are invincible? —Dirty Harold 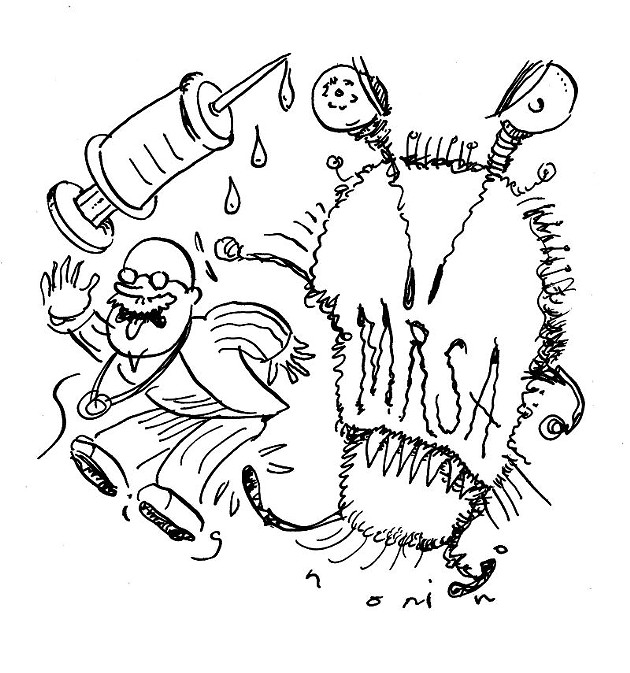 There’s good news and there’s bad news, the good being that fears about ineffective vaccines may be, for now at least, overblown—cause for concern, but not outright panic. Germs in general, though? Can't hit the panic button hard enough.

Let’s start with the relatively sunny stuff. From an evolutionary biology perspective, a highly lethal virus isn’t always a particularly successful one: for a virus, thriving means spreading, and one that ices its host too quickly doesn’t get as much chance to travel.

Vaccination, the worry goes, might mess this up. Because certain vaccines, described as “imperfect,” don’t halt virus transmission but just inoculate potential hosts, they may encourage the spread of more virulent strains. I’m guessing what you read may have related to a 2015 study involving chickens: Birds infected with a nasty strain of Marek’s disease, a lethal condition afflicting confined poultry, were let loose among the greater flock, some of whose members had been imperfectly vaccinated against it. Unvaccinated chickens that contracted the disease died before they could transmit it; the vaccinated ones survived to pass it along to their peers.

Most experts buy the imperfect-vax hypothesis in theory, though nobody thought this study proved it—including its lead author, biologist Andrew Read. Detractors worried about giving ammo to anti-vaxxers, while Read argued mostly that it underscored the need for comprehensive disease management: vaccines plus other measures to block transmission, like mosquito nets.

Largely, of course, vaccines are a story of great accomplishment. They shine all the brighter, though, in comparison with the antimicrobials, particularly antibiotics, administered to treat bacterial infection. And here’s where we panic: humans are losing the fight against infectious diseases because, as you say, bacteria are evolving resistance to these drugs faster than we’re creating new ones.

Surely you’ve heard of the terrifying infections, often billed as “superbugs,” popping up in hospitals, schools, and gyms—the most famous being the vicious staph strain called methicillin-resistant Staphylococcus aureus, or MRSA. Such bugs are the complete package: highly contagious, hypervirulent, and virtually untreatable, causing those infected to die of things like septic shock and organ failure. According to a recent major report commissioned by the British government, at least 700,000 people are now dying annually as a result of resistant infections, and by 2050 that number could be 10 million.

The problem is multifaceted. One source of antimicrobial resistance (AMR), for example, is the livestock industry, which pumps animals full of antibiotics to promote growth; a factory farm is basically an evolutionary training camp for up-and-coming resistant microbes.

Then there’s the drug industry. Back in 2004 investigative journalist Maryn McKenna counted just five antibiotics then in development by pharmaceutical companies, as opposed to 500-plus to treat chronic diseases. With little progress since, last year a public-private partnership in the U.S. and the UK was formed hoping to lure firms into doing more antibiotics R&D; one hopes the hundreds of millions of dollars earmarked for this initiative will be enough of a carrot. It’s not hard to puzzle out the drug makers’ reluctance: it costs about $1 billion to develop a new antibiotic—money wasted if/when the microbes evolve to resist it.

The future we’re looking at, some fear, is a medical Dark Ages. Right now, antibiotics are used to treat infection, but also to prevent it—they’re given prophylactically in surgeries like joint replacement and C-section, and in cancer treatments that suppress the immune system, like chemotherapy. Worst-case, those now-routine procedures become too risky to perform—the benefits not justifying the dangers (death by opportunistic infection).

If something like malaria becomes untreatable by antibiotics, folks will avoid parts of the world where it prevails, depressing trade and investment in already underdeveloped parts of the globe. Malaria’s geographic footprint, meanwhile, is expected to grow due to climate change. I mention this because antimicrobial resistance and global warming are really quite similar problems: huge, deadly, and diffuse enough that solving them will require unprecedented international cooperation and the willingness of corporations to perhaps forgo a few bucks for the greater good. Where they differ is that with AMR, it might not yet be too late.