ARMSTRONG State University’s Department of Art, Music & Theatre has taken a fresh approach to one of Shakespeare’s great tragedies.

In their production of Julius Caesar, the talented students have turned the tables by using men in women’s roles and women in men’s roles, giving the familiar story a fresh charge and new kind of perspective.

Back in the Renaissance era, professional theatre troupes only included male actors (the first woman to appear in a Shakespeare play did so in 1660, 44 years after The Bard’s death); that notion, in addition to themes throughout the text, make Armstrong’s interpretation a fascinating one. 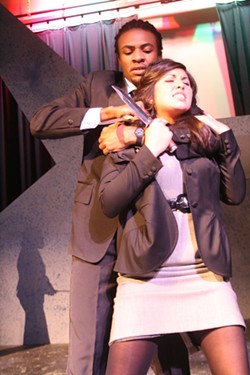 It’s long been written that masculinity and effeminacy are essential issues in Julius Caesar; academics have said that Caesar’s effeminacy is what makes him vulnerable. The compassion of Brutus and Cassius is often interpreted as feminine and shows a rare strength in male characterization.

Dismissed by their husbands, the women of the play often represent the neglected private lives of their husbands, Brutus and Caesar. The total upending of power dynamics in the script is a real reason to check this one out.

As the play opens, Rome’s commoners are celebrating Caesar’s return from defeating Pompey’s sons at the battle of Munda. Not long after, during a parade for the hero, a soothsayer delivers that famous forewarning—“Beware the Ides of March”—which Caesar dismisses.

As the story continues, we see Caesar’s political career topple as the prophecy is fulfilled in a whirlwind tale of betrayal, murder, and power. Littered in omens, pride, and revenge, it’s a fine follow-up to your Halloween weekend.