Coming out of hibernation early, there's plenty of art to see this weekend. 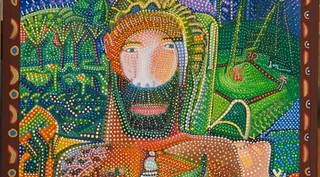 The dog days of summer might be slowly coming to an end for the local visual arts scene, which is showing the first signs of waking from its summer siesta. There's no groggy eye-rubbing as we regain our bearings, and this week offers up a little something for everyone with three very diverse events that will carry you right through the weekend.

If you've been fiending for a fix of new local art; you want to learn about the intriguing lives of self-taught artists; or you just need to find out where you might score some free wine and cheese, here's the rundown.

The Kobo Gallery is launching a new series of group shows highlighting the range of talents residing within its Barnard Street location. The first show opens on Thursday, August 19, with a multi-dimensional extravaganza featuring three of the co-op gallery's members.

"2-D, 2 ½-D, 3-D" features an eclectic, albeit complimentary, selection of work from Amanda Hanlon, Caroll Williams and Dicky Stone, each of whom has a unique form of local inspiration.

Hanlon, a painter and print maker, had her interest piqued by the ornate cast ironwork of Savannah, and since moving here has set out cataloging designs from around the Historic District. She fuses these elements with more organic shapes to create stylish prints.

Representing the third dimension is wood worker Dicky Stone, who creates unique interpretations of local flora. He begins by turning pieces on the lathe, and then carving in details and adding some polish. The results are gorgeous decorative works that pay homage to the simple beauty of marsh grasses.

"My work is somewhere in between," says Caroll Williams, who is pioneering the second and a half dimension with her assemblages.

Williams transformed a background in graphic design and a penchant for collecting old boards that she finds washed up on the beach into pieces that hang on the wall, but have more depth than the average picture.

Two weeks ago, the Jepson opened its "No Ordinary Folk" exhibit, featuring a collection of works by self-taught artists from around the Southeast. Although the exhibit wasn't announced with a modicum of the fanfare for their "Twilight Visions" collection, the new show is a great example of what the Jepson does to enrich Savannah's cultural fabric.

The assembled works, about 90 percent of which are drawn from the Jepson's permanent collection, couldn't be more different, bound only by the common thread that their creators weren't professionally trained artists. Including works from artists living and dead, the show features sculptures, paintings, drawings, and a variety of hand carved canes.

There is no shortage of eccentricity, but not all the artists were hermetic iconoclasts either.

"Not all of these artists worked entirely out of the mainstream," says Harry DeLorme, the Jepson's Senior Curator of Education. "You have people who are isolated, and really don't care if anybody else pays much mind to what they're doing. But a lot of them are folks who are showing their work as well."

One of the pieces, "The White Fence," a highly political painting by William Ned Cartledge, originally made its debut at the Savannah Art Festival in the late 1960s. While there are several artists with local ties, there are representatives from across the Southeast as well.

On Friday, take a long lunch and check out an afternoon talk from DeLorme, who will discuss the intriguing lives, work and circumstances of some of the notable artists whose work is included in the exhibit.

The event is being presented by SCAD student Gus Muller, who has recently begun to dip his toe in the water of event production under the name Safe and Sound.

Lewis' work features textured images that elicit intimacy and nostalgia without wandering into triviality. Loughrey eschews digital techniques for a hand-drawn style reminiscent of a gentler, more contemplative George Plimpton. Mandonile's photos have a distinct femininity to them, and a predilection for hair as a central subject. Kettler's bizarre, colorful paintings and Star Wars allusions will definitely resonate with fans of Adult Swim programming.

The musical component is art show appropriate too. The headliners are a young DC-based band called Hume, who bill themselves who blend elements of experimental electronic music with pop, punk and classical elements, with songs ranging from moody John Cage meets Animal Collective dirges to uptempo art-rock that manages to be challenging without sacrificing listener friendliness.

Hume will be preceded by The Shy Violet, another DC-based act, who are masters of lo-fi experimental surf music with a dose of the Velvet Underground dropped in for good measure.

This is another in the growing number of all ages shows that have been popping up around the fringes lately, which have been filling a glaring gap in the city's cultural offerings.