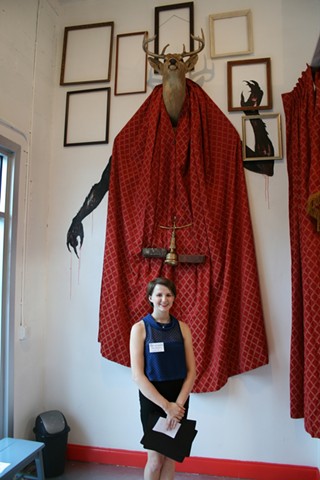 Desotorow exhibitions manager, Ellen Waldrop, in the entrance to “The Capstone” installation by 13 Bricks

FOR A CITY woefully low in its stock of civic art, the Art March band of talented young visionaries is bringing the arts to the street on its own. Last Friday's First Friday Art March in galleries south of Gaston doubled its attendance, and its leaders at Desotorow Gallery have barely put their foot on the gas.

She needs more fans on her Facebook page, but Salas is clearly on her way, as one customer purchased a bracelet, a ring, and a necklace with glee. She told me that one of the contestants on Rue Paul's Drag Race is the proud owner of two of her larger necklaces.

The rise of SamiChan8 will be something worth following. Across from her table, young artists were center stage on the avenue where DesotoCorps member Jordan Acosta engaged youngsters with new creative techniques using crayons and heat.

The piece de resistance, "The Capstone," by the 13 Bricks group of artists, was nearly standing room only in the Desotorow Gallery. This is not to say that there was a line to get in; it was more of a cozy mingle of marchers drifting between the plucky electronica tunes of Electric Grandma playing at the entrance, and the smash up of collaborative art inside the gallery.

Collaborative installations can go a couple of directions, and I was reminded of a few disasters I saw in the 1990s in Greenwich Village and SoHo galleries. The intentions of such efforts can read great on paper, but often fail as a cohesive installation.

Somehow this one works on both levels. The seven like-minded artists selected for the next round of 13 Bricks' T-shirt designs aim to grow the dialogue about the arts not only through t-shirts, but also through "The Capstone." Their statement claims, "We want art everywhere, and accessible to create a conversation, and maybe, hopefully, resonate with someone."

"Capstone" worked as a unified visual display, with vertical presentations flanking the entrance, and a stage curtain separating the entrance from the gallery, allowing the viewer to become part of the production. In the corner, a large pyramid with works by all seven artists leads the eye upwards via a staircase to a crystalline shaped light. Around to the left wall is a tree-based mural indicating growth and longevity.

Individual items were also a focal point, with patrons asking for pricing more than I've heard in a gallery setting in some time. "The Capstone" will be on view at Desotowrow Gallery, 2427 De Soto Ave., until Aug. 10.

Departing the hub of De Soto Avenue I lit out to a new player in the Art March parade, Anahata Healing Arts, at 2424 Drayton. Featured artist Isak Dove, showed a collection of works she completed when she was last in Savannah for two years.

Dove is a gypsy-like child of the world, having lived most recently in Switzerland. She is a self-taught painter and clothing designer who said to me when I asked her to describe her work: "I don't really like doing that. That's your job."

I love her candor and understand her resistance to talk about her works that she claims have a life of their own.

At first glance, one would think we are looking at psychedelic, Deadheadish imagery of self-exploration. Reviewing the works more closely, two jump to the head of the pack and are both centered on a dialogue between semi-skeletal female figures.

"The Game: First Hand" is particularly striking, even from afar, with a dimension provided by the subtle sky above the two figures as they commence a game of cards. The bare skull with a pale blue eye peering out on top of the figure with a human body is well executed and thought provoking. The paired images echo the work of Frieda Khalo.

Overall, Dove's works are charming against the recurrent background of mortality at play, and we should look forward to what she does now that she is back in Savannah. Lynn Geddes of Anahata Healing Arts is teaching yoga classes and drawing on some of the themes in Dove's works that explore the constant tension between the spiritual and physical worlds. Dove's works will be hanging until the end of August. Stop by the center or call Joanne at 912-676-4280 for an appointment.

Marchers scattered to the other galleries at Foxy Loxy, Black Orchid, Sentient Bean, and the Mansion on Forsyth Park, all of which will have new artists next month. Clinton Edminster, Desotorow co-founder, said that all Art March participants in the future will feature new artists each month as part of their contracts and several new venues would be added in September. Topping off the evening was the first afterparty at the Wormhole, which was a wingding.

"It was James Lee's debut on stage and he surprised all of us with his voice and stage presence. Planetary Projections and Omignome got everyone up and dancing and the energy was high even when I left around 1 a.m.," said Edminter.

"The projectionist was using colored oils and colored waters on an overhead projector to display some really trippy visuals. There were over 70 people there, and the decorations by one of our DesotoCorps members really added some charm."

Some were surprised to learn that the Wormhole serves food, and they then enjoyed hearty dishes like jalapeno burgers. The afterparty will be a continuous feature to each First Friday Art March, enhancing the interactivity among the growing subterranean art culture in Savannah.