It seems as though Ray Benson, leader of Asleep At The Wheel, has no intention of slowing down. He’s carried his band through 100 members and lots of changes over the last several decades, and continues to evolve its sound past the western swing and country that some might know them to do best.

Their latest record, released in 2018, is a testament to that spirit - an entirely new lineup joined Benson on the record, and it was perhaps their most musically daring and diverse offering of their career. On the heels of that release, Benson and company will be coming to town for what’s sure to be an incredible and memorable performance at this year’s Savannah Music Festival. 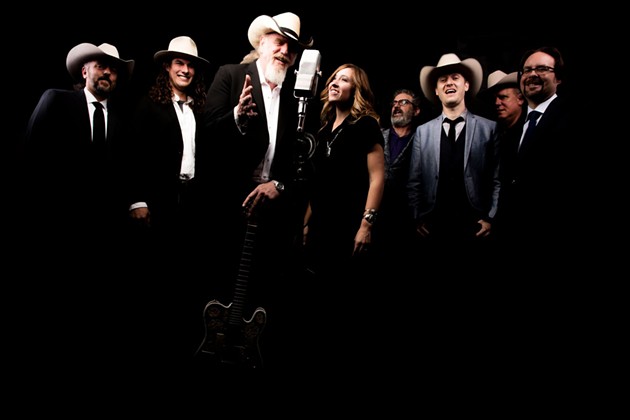 We spoke to Benson ahead of the band’s show to talk about their history and their latest genre-bending project.

This is a band that started in one place, moved to another, and then landed in Austin, Texas. Tell me about that whole journey and how you ended up where you are.

That’s a book! [laughs]. Well, you know, we started in West Virginia - me and two friends. We met Commander Cody, who invited us out to California. We moved out there, and then Van Morrison mentioned us in Rolling Stone. So all of the sudden we got a record deal. Then we met Willie Nelson, and moved to Austin in 1973. From there, there were many changes, many albums, many successes, and many failures [laughs].

That seems to be the mark of a great band, though, that you can weather all of that and still keep going. What is it about Austin that made you sort of land there?

We’d met Willie Nelson and Doug Sahm, and they said, “You guys are perfect for Austin and you need to come down here.” We played there with Commander Cody, and were hanging out there. I was 23 years old, and there were folks my age with my ideas. Rent was cheap, pot was cheap, there were gigs.

The college was there, so there were college kids coming through the clubs. There were writers, filmmakers, songwriters, and bands, so it was a very creative community of people exiting the hippie era in terms of counterculture. We kind of made our own counterculture.

You mentioned the Van Morrison thing - that’s something I’ve heard about for years. How does someone like Van Morrison hear of a band like y’all?

He lived in the Bay area. He lived up there, and we played all of these little clubs. He’s always been a big fan of country music, and he liked the band Clover. They were our pals. So he came down to our little club and played a gig, and said he wanted to produce our record. He put us on some big shows with him. So back then, when that happened, it was this young band with a weird name getting attention from this big pop star - and that’s how we got all of that [label] interest.

I want to ask about one project in particular that really stands out to me - 1999’s Ride With Bob, the Bob Wills tribute record. What's so amazing to me is the diversity of the artists involved in that record.

That was actually our second tribute album to Bob.

We'd already had great success with the first one, and it was basically a generational thing. Every ten years, it was nice to see people discovering the music and helping to keep it alive.

Do you find that there were takeaways from those two projects that you sort of took forward? What sticks out to you the most about making those records?

So much. We got to work with some of the most legendary artists of all time. To go into a studio with Merle Haggard, Willie Nelson, Chet Atkins, the Dixie Chicks, Garth Brooks - getting to work with all of these people gives you a little clarity of where you sit.

When you look at the time frame in which those two albums were made, I’d built a studio and we went through this incredible journey technically doing those records, going from analog to digital and back to analog. We rediscovered some of the old technologies that helped make digital sound better. So that’s the esoteric part of it. And the other aspect of it is, to get to learn all of the Bob Wills stuff intimately and get every single aspect of it was quite a learning experience. It’s at least worth a PhD [laughs].

The latest record, last year’s New Routes, sounds like a pretty different project for you guys. If you could sort of define what it is you were going for on that record, how would you do that?

The goal was that this is the new Asleep At The Wheel. Five new people. Especially Katie on vocals - we've always had a female vocalist, from day one.

That's a big factor in the band's sound.

Yeah, it's always been there. So anyway, it's a new band. When you join Asleep At The Wheel, which 100 people have done, you have to be able to play, in a general sense, what we've done in the past. But it's also about what else you bring to the table. It's a band. When you have a band, you're supposed to play the instruments and make up the music, etc. So that's what this was. Asleep At The Wheel 2.0. That's what this was about. If you look at the history over the years, it's pretty broad and different stuff.