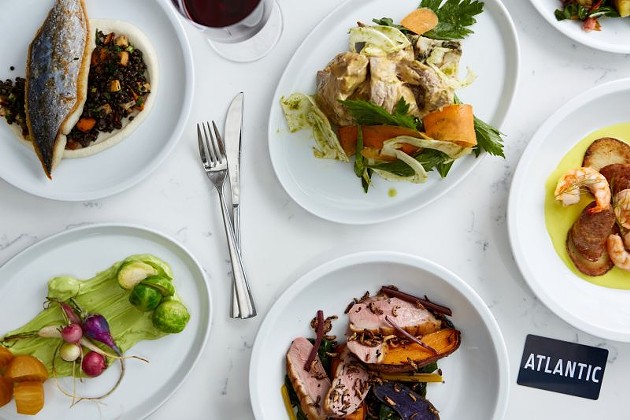 AMIDST ALL the recent fall activity here in Savannah, Atlantic is celebrating its third year serving the public with a week-long celebration of excellent wine, food, and special guests. Each day, different types of wines will be offered, accompanied by wine personalities and sommeliers from across the nation.

“The week of our celebration is a very important week for the city, because it’s the week of the Savannah Food and Wine Festival,” owner Jason Restivo comments.

“It just so happens that our restaurant opened on the week of this event. Instead of just celebrating for one day, if the whole city is already celebrating, we wanted to bring something to the table. And I chose to celebrate every day.

“Each night is appealing to different guests who have been coming to us for years. For example, I know guests that will be coming on Monday because they like Oregon wines; I know guests who love Italian wines, so they’ll be here on Wednesday; and so forth. It gives everyone an opportunity to have what they want.”

The festivities started on Monday, Atlantic’s official third anniversary. Restivo clued me into the events of each night, and which wine personalities will be in house to host them. 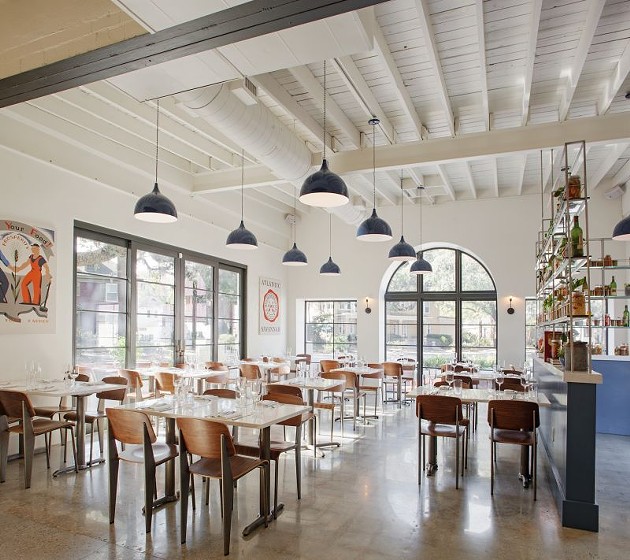 “On Wednesday, we have an Italian brand in house. We have a friend of mine coming in—his name is Clint Sloan. He’s out of Charleston and is going to represent a very well established Italian winery called Scarpetta. It’ll be all Italian wines that night.”

They even have some wines offered in a can, so you can get a bucket of wine.

“You don’t really always see that, but for me, wine doesn’t always have to be this serious thing.

On Friday, Clint Sloan returns to showcase the West Coast wines he is responsible for as an ambassador.

“It’s kind of a chardonnay and pinot noir takeover on Friday,” adds Restivo.

To complete the festivities, master sommelier Robert Jones will be at the restaurant on Saturday.

“There’s about 290 master sommeliers in the world, so that’s a pretty big deal. He’s coming here, he’s been here 7 or so times, he’s a big fan of Atlantic, and all of the staff love him. That will probably be that feel good moment, especially since it’s our last day of celebration and we’re ending it with a really good friend.”

This value of good friendship seems to be a common theme with the restaurant, especially with Restivo’s overall idea and how it came to fruition.

“It wasn’t until I started hanging out with some friends about 5 years prior to the restaurant becoming a reality that we would get together once a month on a Sunday as a handful of couples with our children running around, and drinking amazing wine, where each person would provide a different flavor of food in a fashion that was very sharing-centered,” he recounts.

“I really loved that concept, where you can create one dish or one platter, but pass it around so everyone’s enjoying it, and enjoying that same flavor. It’s this community-based idea.”

Atlantic has embraced this concept of community for three years now, providing the basis for much growth.

Also key to the restaurant’s success, Restivo adds, is the location.

“I think, at the end of the day, we’re all really lucky we get to rock and roll in such a great environment and serve great people. There’s so many other environments that we could’ve chosen, but being on Victory Drive, being in Starland, north of Ardsley Park, and south of Victorian, it’s just so exciting down here.“

Personal growth as an owner with the staff was also conducive to Atlantic’s success.

“Ultimately, I’ve learned so much about myself—things I’m really great at, things that I’m not-so-great at. Not only has Atlantic gone through, like anything in life, this ebb and flow, so have I. I care and love what I’m doing so much, and it’s always kind of this work in progress. I never have taken it for granted.

“The city is growing, and we are too. For us, it’s also about human growth and development, sharpening skills, and preparing people for life.

“In the next 30-60 days as we finish this year, there’s some really good, exciting announcements coming. We can’t wait to share that with the community, because it really has been the community that has supported us so much, and allowed us to be relevant in this city all these years,” he says.

Restivo hints that there will be some exciting news in the near future, but Atlantic still has strong roots where it is now, serving the surrounding neighborhoods.

“But that’s just who we are. We’re a soft, gentle heart. And we’re turning 3 years old next week, it’s a really good feeling.”