'One thing you can't deny, no matter who you are, is the feeling people get when they hear the sound of an electric guitar. Just play an A chord. People feel that power.' 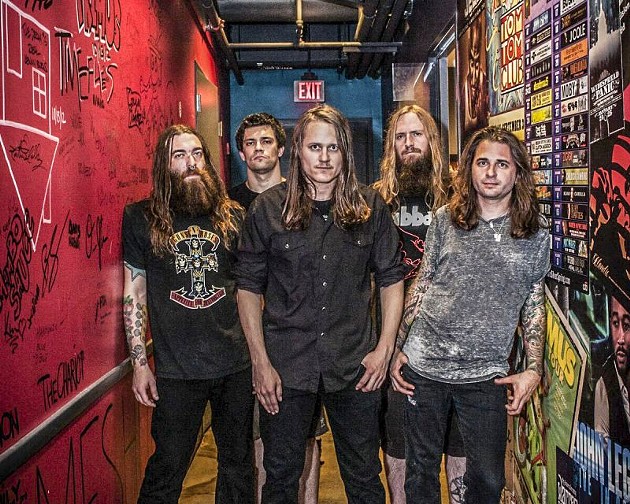 SINCE FORMING in the DC area in 1995, AURA Fest headliner Darkest Hour has built one of the more impressive bodies of work in modern metal.

Bridging the gap between melodic Swedish influenced metal and old-school thrash, the band’s versatility and popularity has helped land them high-profile Ozzfest appearances and an opening slot for Trivium.

Their ninth album, Godless Prophets and the Migrant Flora, was released last year to great acclaim, and is the band’s most successful to date.

Darkest Hour’s headline gig in Savannah will help kick off a regional tour, followed by an expansive European tour later in 2018.

Forming half of the band’s signature twin-lead guitar sound is co-founder Michael Schleibaum, who in addition to touring and recording with Darkest Hour, also has a thriving career as a producer and a TV soundtrack composer.

We spoke to Mike last week.

You guys are going out on another European tour this year.

Mike Schleibaum: It’s one big continent and we’re doing just about the whole thing! Germany, down to Spain, France, the U.K, then over to the Scandinavian countries. Then we’ll end up in Budapest, Prague, the eastern European cities.

Seems like so many metal bands return from big European tours with insane chops and start to really get serious about things. It’s like a baptism of fire.

Or they quit and get into a different line of work! Touring in Europe can either make or break your soul. It can be the best time, or the worst time. You learn to keep your priorities straight .

What would you say is the big difference, if any, between stateside metal crowds and European audiences?

Now, thanks to globalization and the internet, not a lot of difference. There is some difference in the way they dress and the music they’re into. I’d say American metal culture is a couple of years ahead. Americans tend to be more jaded and trend influenced. As Americans we have access to everything so fast.

Our society is examined so closely by everyone. A lot of culture comes from us. Of course you have some incredible European metal bands, don’t get me wrong.

People tend to look up to American bands because we have so many touring opportunities here. Sometimes Europeans are forced to live the culture of whatever comes through their town.

That sounds odd. It seems like the two most exportable music forms in the world are heavy metal and hip-hop.

You didn’t mention EDM! Yeah but everywhere you go, people like heavy metal, all over the world. My mom thought I was crazy when I started out. Everybody thought I was nuts! But to be honest there is a little bit of a parallel to EDM in the way that it is a form of music that really does have fans everywhere.

One thing you can’t deny, no matter who you are, is the feeling people get when they hear the sound of an electric guitar. You don’t even need to hear a song. Just play an A chord. People feel that power.

What kind of set-up is it usually for you guys on tour? A couple of buses, or what is the current situation like?

We’re in a couple of vans and a trailer. The logistics of a bus doesn’t lend itself to this type of tour. Now in Europe we shared buses with other bands. That becomes a real world version of MTV’s Real World! The shit gets real when you live with other bands and get to see all their flaws, and all the great stuff too.

Personally I don’t really get the need for all the subgenres of metal, but if you had to, which ones would you say best describe Darkest Hour?

My opinion on subgenres is that I don’t need them, but apparently a lot of others do, in order to explain the way bands sound rather than listening to them. It’s a necessary evil.

I love your throwback twin-lead guitar thing. It really sets you apart. It used to be a pretty common metal thing back in the day, but these days it’s rare.

It’s funny you say that it’s rare now. Through the advent of modern metal hardcore, and bands like Meshuggah who are very precision, rhythmic-based bands, the approach to the heavy metal harmonic double guitar thing has definitely faded. But after a time, a bunch of bands started sounding like what Darkest Hour is doing.

Our love of that double guitar approach is definitely an homage to older school bands. But we always do our best to be as modern-sounding as we can.

You can play songs from our first album in 1999 and songs from our newest album live, and they all sync together. They’re all presented in one way, like, ‘this is how the band plays it live.’

The way John sings is one reason the band sounds modern. If you sing like ‘80s thrash metal or like the guy in Queensryche, you’d have a completely different approach and sound dated (laughs).

You’re a big Pantera fan. It’s always amazing to see some list of “Greatest Guitarists” and not see Dimebag Darrell on it. He’s not just one of the best metal guitarists, but really one of the great rock guitarists ever.

A lot of things about Pantera were progressive. Of course a lot of the reason people make lists, especially in the media, is to eventually sell something (laughs).

But Dime’s an interesting character. He basically resurrected two dead companies, Dean and Washburn, singlehandedly. He played his style of guitar in the ‘90s when music was gravitating to grunge. He resurrected ‘80s glam metal guitar.

But he was a different type of guitar hero. It wasn’t just about him, it was also about Pantera, the band.

In some ways Pantera was like Van Halen in that they were kind of everybody’s music. But Pantera was unlike them in that Pantera was meant to be polarizing. Dime was such an aggressive player to put next to somebody like, say, Jimi Hendrix.

Then he had that tragic ending and he kind of solidified into a revered and remembered figure.

Tell me about your non-metal career. What other projects are you into these days?

My last TV composing project was ‘Return to the Isle of Jaws.’ I composed a song that was used to attract sharks to the edge of the boat. The vibrations of the double bass drums underwater emulate the motions of a dying fish. That was an awesome program to work on.

Since then I’ve been working, obviously, on tours and also a bunch of band projects. I’ve had almost every job in the business possible — booking agent, manager’s assistant, ghostwriter, producer, engineer, the guy who sweeps up the studio floor.

I’m working on a project with somebody from the band Prong. Of course working on a bunch of new Darkest Hour stuff.

I just recorded a hardcore band from Texas called Eleventh Hour, a seven-inch. I’m all over the place, but the main focus is to always spend some time every day on the next Darkest Hour project.

I turned the corner last year when I finally realized that as a human I’m kind of lucky to have the ability to spend time creatively on music I like, and do the band stuff too.

I meet so many people who are like, you’re so lucky dude, you’ve got the life. But they don’t realize the amount of struggle. It’s a game of inches, but if you don’t start it will sneak up on you.

I’m kind of a busy dude, but I still have time to go to the movies every now and then.

What kind of set are we in for?

We usually clock in at about an hour and 20 minutes on this tour. It’ll be a mix of songs through the band’s catalogue, plus some new songs we’ve never played before live. I don’t want to give away too many surprises, but we’ll be throwing in a cover that’s a lot of fun.

It’s been a long time since we played Savannah! We’ve played there a few times but it’s been awhile.

This isn’t our first rodeo, so we’ll definitely give you guys a pretty goddamn great show.