LOCAL bakeries are the cornerstone of a community’s culinary scene. Long before sliced bread became commercially distributed in the '20s and '30s, neighborhood bakers filled the carb-hungry bellies of local residents with loaves of bread and a sandwich or two for decades.

Obviously, times have changed a lot since then, but there is still a little bit of that down-home love being pumped out of the Auspicious Baking Company’s ovens every day for local residents.

You can go into seemingly just about any restaurant in Savannah and find a baked good created by Auspicious Baking Company. And if you ask most locals, they have sampled any one of the exemplary products of Auspicious.

As a forever fan of the genius bakers, it came as no surprise when owners of Auspicious Baking Company, Mark Estron and Kaitlyn Bryant, announced the opening of a bigger and better second store front.

What once housed Great Harvest Bread Company in the Sandfly shopping center is now the expanded Auspicious Bakery. 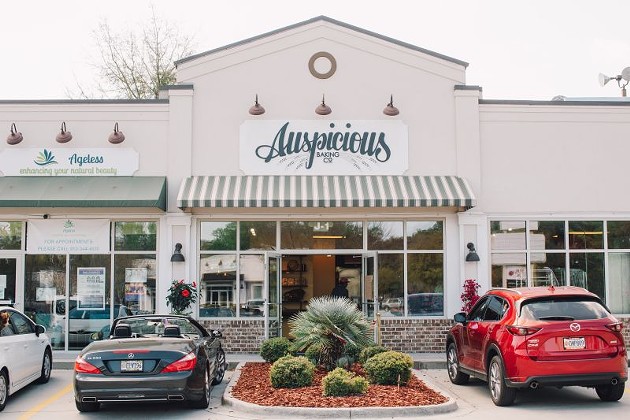 “We really just needed more room. Probably within six months of opening at Derenne we realized we were quickly outgrowing that small square footage. And then the equipment became available through sale when Great Harvest went out, and we came to just look over what would be here. We realized pretty quickly we could use almost everything in the facility,” she says.

Fiancés Estron and Bryant originally planned to keep the first location open as a sister shop to the newest store. Shortly after finding success at the Skidaway bakery, the duo announced they would be closing the original, smaller shop.

The baking whizzes have managed to gain success despite the pandemic that has caused restaurant closures across the nation. The move to a bigger space enabled Auspicious to set guidelines for patrons before Governor Kemp’s most recent pandemic-related executive order. 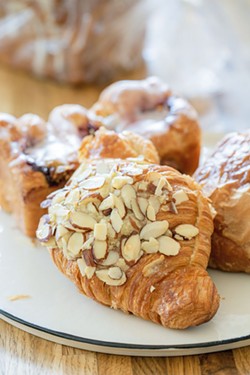 To ensure social distancing, the bakery implemented a pre-order system. Customers can go onto auspiciousbakingco.com and place their pastry order for pickup.

The bad news is that those, like me, who wait to purchase in person are often left with a smaller selection. There is nothing worse than missing out on their flaky ham and cheese croissant that has a signature extra special bonus—the cooked crispy bit of cheddar cheese that oozes out of the side of the thousand layers of buttery pastry and salty ham.

If you go into the store, instead of preordering, guests are asked to wait outside of the store to allow for one patron and one patron out. Even before the recent change in policy, when the doors open to Auspicious you can expect a line around the building. A long line of hungry shoppers has been the norm at the bakery since almost the day they opened shop.

The consistency of creating high caliber pastries, breads, and baked goods has not changed for Auspicious. No matter the geographical location or day of the week, perfectly executed and professional quality are pumped out by the bakers of one of Savannah’s favorite bakeries.

Classics like the ham and cheese croissant or the monkey bread stick around the menu, but head baker Bryant constantly creates new treats. 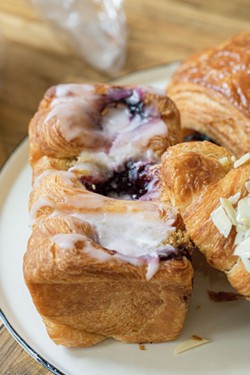 A cold case is part of the new expansion. Hummuses, curds, soups, and jellies are now being sold in store.

Bryant explains, “We are making a lot of prepared items. We’ve got a lot of really great girls working with us now, so they are doing a lot of jams and fillings and stuff.”

Freshly curated hummus is the perfect accompaniment to any of Auspicious’ artisan handmade crackers. The same can be said to the jams and jellies as a counterpart to any of the naturally leavened breads.

Along with menu expansion, the opening of the second location enables Auspicious to extend their hours. In the past, baked goods were available only on Tuesday and Sunday. Now, Friday marks the third day for purchase.

In the future, Estron and Bryant plan on expanding their store to include cafe offerings. Sandwiches and the ability to dine in allow guests to spend a little bit more time with the lovely team of Auspicious. Past lunch sandwiches have included BLTs, Italian meats, and mayo coated salads.

“People can definitely expect more made to order items—time warranting obviously. We are going to have a full sandwich menu. We will probably offer one soup throughout the week,” according to Bryant.

Amping up space has resulted in larger production on the wholesale side. Restaurant goers can expect to see more of Auspicious’ products on menus around town.

Unfortunately, due to the pandemic Bryant and Estron have been unable to host an official grand opening.