Axelle Kieffer: ‘Nothing is static’

Solo show at The Butcher evokes the human figure in motion 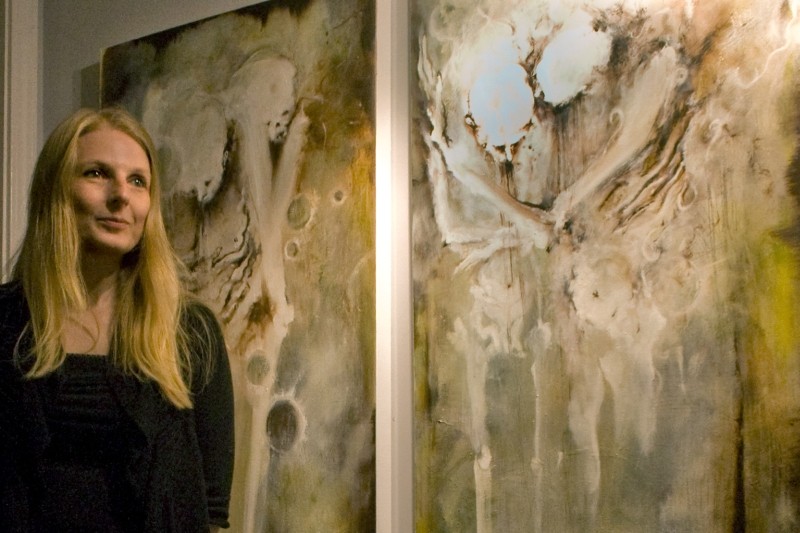 Axelle Kieffer, pictured in front of “Invitation au Voyage,” explores the beauty in the human body in her upcoming exhibition at The Butcher.

AXELLE KIEFFER is anxious for her the opening of her exhibition at The Butcher Gallery this Friday for two reasons.

One, this is her first solo exhibition since moving to Savannah in 2009 from Strasbourg, France. Following her American arrival she did not widely share her work with both friends and the public.

“It’s a big coming out. I won’t be able to hide,” Kieffer laughs.

Second, she is nervous about how people will react to the style of her work, which flirts with the macabre throughout its exploration of the human body.

“In France I had weird experiences doing shows. Everybody thinks I’m a man because seeing the paintings they think its more masculine than feminine. So they say, ‘What! You’re blonde and a woman! You did that? It’s so dark!’” she says.

Dark the work may be, but it is also delicate.

In Kieffer’s paintings gentle ghostly wisps trail from the boldly articulated forms that fumble from nothing into sharp emotive detail.

Her collages incorporate illustrations from medical books cut with the precision of filigree and stitched together seamlessly.

“I concentrate on the human body, inside and outside, but mostly inside,” grins Kieffer.

While her fascination with anatomy influences her work, it is a desire to understand its relationship to emotion that drives her creation.

“The human body is a machine that is very weird. What I don’t understand is how our feelings work with this machine because it’s really entwined. I’m trying to understand through my paintings how the feelings influence the body and the body influences the feelings,” Kieffer says.

Simply put, it’s the soul she is painting, not the form.

No sketches, she just begins applying paint and the form emerges from this initial “accident with the painting.”

As the human figure emerges from her expressionistic strokes, her intention becomes “to capture the subtle movement of the soul.”

She evokes motion. The abstracted, almost faint, figures are in a deep flux—psychological and physical.

“To me nothing is a straight line. I like something that is moving. Nothing is static. Never. Not your body or the feeling in your body,” Kieffer says.

Her exhibition at The Butcher demonstrates the persistence of motion in her paintings but also in her artistic career. The show is practically a retrospective. 60 works created from 2004 through 2015 display the flowering of her creativity.

The impetus for much of the growth stems from Kieffer’s immigration to America.

Her palette shifted from bold black, white and red while in France to softer earth tones and light hues. This evolution is clear in the exhibition.

Further, she has expanded beyond painting into collages.

“In France we don’t have that many antique and flea markets. Here I can find old photos, medical books, a bunch of interesting stuff for nothing. I have more access to any kind of supply and medium,” Kieffer says.

In 2012 while unable to paint and with plentiful materials, Kieffer explored, crafting collages.

For her, collage is a meditative practice, a series of tiny puzzles to solve, while with painting, it’s emotional.

Kieffer will display for the first time together her paintings—many of which, both old and new, have never been exhibited—drawings and collages.

In all her work Kieffer is concerned with the journey—from flesh to feeling, from agony to acceptance, and from birth to death. She traces and translates the tension, expressing the ephemeral existing between solid points, bringing beauty to the somber. There is no joy without pain and the journey unfolds unplanned.

“The accident of life,” she says poetically.

She’s on a journey as well, beginning to re-launch her career in America. In Europe she regularly exhibited in both group and solo exhibitions across the continent from the UK to Germany.

“It’s a second start, but it’s a first start too,” she says in reference to her unleashed creative palette.

“I think that one painting always brings another painting because it’s an experiment for the next one. So, I don’t know really in the end where it’s going to take me, but,” Kieffer says with a smile, “I’m going there.” 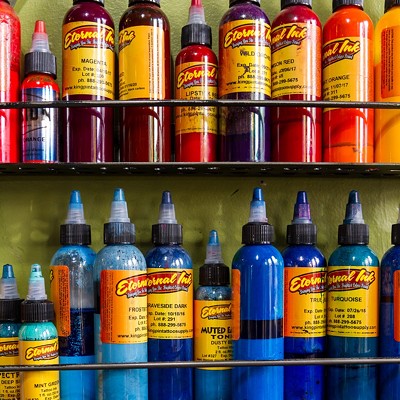