SHARK WEEK is upon us.

Every year, the Discovery Channel runs a week of programming dedicated to the most misunderstood marine mammal. It’s a cult favorite and an inspiration for lots of ocean lovers.

But sharks don’t exist just on TV, just for this week. Georgia’s coast is home to plenty of sharks, including Cabot, the great white shark that Ocearch tracked off our coast last winter, as well as some of the over 500 species of sharks.

Sharks are a powerful, beautiful species that deserve protection and understanding. However, they’ve gotten a bit of a bad reputation thanks to media portrayals of them. 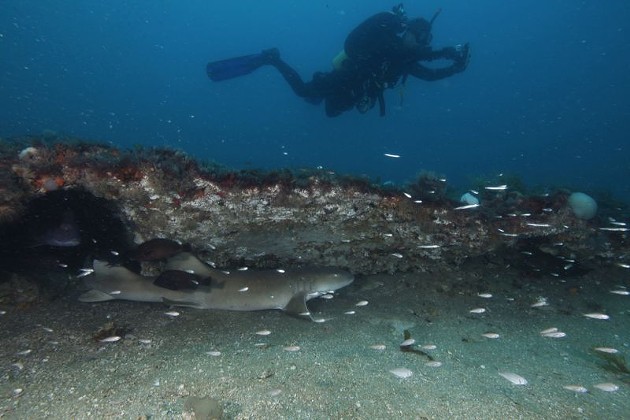 DIver swimming over nurse shark under a ledge at Gray's Reef National Marine Sanctuary. Pic by Greg McFall of NOAA.

The chance of a shark attack is exceedingly rare, explains Dr. Alistair Dove, Vice President of Research and Conservation at the Georgia Aquarium in Atlanta.

“The number of people who are killed by unprovoked shark attacks every year in the whole world is about six,” he says. “But from ‘Jaws’ and that sort of general fear of not being able to see what’s below the surface of the water, people sometimes worry about what you can’t see. That’s where the fear comes from. It’s not really the fear of the shark, it’s the fear of the unknown and the shark is just a useful bogeyman that we put in the place of the unknown.”

“They’re sensationalized to a degree,” says Paulita Bennett-Martin, campaign organizer for Oceana. “They’re all incredibly powerful, and with good reason for people to think of them in a certain way, but they’re powerful and beautiful.”

Sharks are also at the top of the food chain, which is always a little worrisome for other species.

“Sharks fill that role as top predator and sometimes as the second-level predator as well,” explains Dove. “Having an ocean without sharks would be a little like having a Serengeti without lions, or a sky without eagles. It’s just not a proper ecosystem if you don’t have that important top predator role filled.”

“Sharks have a tremendous amount of influence on their biodiversity in the ocean, in whatever area they exist within,” says Bennett-Martin. “That’s a really important point, because we should all probably know that ecosystems have many kinds of complex interconnected relationships, and it’s problematic when you start to throw those equilibriums off. Sharks are no different. They’re an apex predator, and what happens under them is impacted by their presence—or lack of presence.”

Their place at the top of the food chain means they’re even more essential to protect, despite whatever fears we may have.

“We don’t really know how important sharks are,” says Dr. Simona Perry, conservation expert. “Scientists are working on figuring that out. That’s why they study sharks: to understand the whole predator-prey dynamic and the importance of them in the ecosystem. We know that predators play a really important role in controlling populations of prey, but they also might provide other benefits we don’t know about.”

Regardless, sharks in the ocean ecosystem are crucial to our Georgia coast.

“We know that all things that happen offshore end up affecting us here,” says Perry, “and everything we do here affects offshore. So many different fish species congregate around that area that they see all kinds of sharks there that are really important.”

One major action affecting sharks is the act of finning. Currently, Oceana is working on the Shark Fin Sales Elimination Act with members of Congress.

“This act is proposing that the United States remove ourselves from the trade and sale of shark fins,” says Bennett-Martin. “This is not a policy to punish licensed fishermen from catching sharks. They can still fish for sharks according to whatever their permit allows for them to catch—that’s how fishing works. Our ambition is never to go in and restructure what people’s permits allow for, but we look at issues that are non-sustainable fishing packages, and finning would be one of those things.”

Finning is the abhorrent practice of removing a shark’s fin and discarding the rest of the shark, which is often still alive when released but will die a slow, painful death without its fins.

“It’s estimated that fins from around 73 million sharks a year wind up in the fin trade. Think about those numbers!” Bennett-Martin urges. “We want healthy oceans, and the ocean won’t be healthy without sharks in it.”

“Humans have been left out of the conversation on ecosystems a lot, and we need to kind of reinsert ourselves because ewe are the biggest problem with ocean conservation,” she says. “I think the urgent thing about protecting sharks is that we simply don’t know enough not to protect them. We don’t understand how the ecosystem and marine environment works—and we might never. There are a lot of mysteries still.”

Enjoy yourself this Shark Week, and keep that same energy year round for our seafaring friends.