Back to her roots

YOU MIGHT know Carmen Marie Aguirre for her role as gallery director at the Grand Bohemian Gallery, but now her own art takes the spotlight.

“Rooted,” up now through March 31 at the Jewish Educational Alliance’s art gallery, is a collection of Aguirre’s paintings, primarily her work with mangrove trees.

A Miami native, Aguirre was inspired by the mangroves of South Florida. This is the first solo exhibition of the work.

We spoke with Aguirre last week. 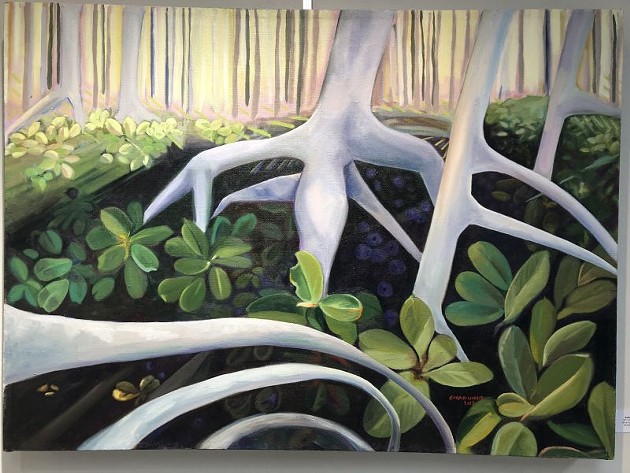 This is your first solo show in Savannah ,right?

I’ve participated in the tree show at Location [Gallery], and this is actually the first solo showing here in Savannah. That, to me, was scary at first because the style, the coloring, I felt stood out from what I would see at the galleries here. I was comfortable showing at a gallery in Miami because all the colors are bright in Miami. You could just fit right in. But here, it seems like it’s a different look. Now I’m realizing, no, not really.

A lot of what I was seeing here were your softer marshes, your softer colors, things of that nature. It has a lot to do with the type of lighting you have here. That’s what was reflected.

When did you move from Miami to Savannah?

I was born and raised in Miami. I came here in 2016. My daughter has been here since 2005. I remember turning off I-16 to 37th Street and just right there at the light, I don’t know what hit me, but I said, “I could live here.” My daughter said, “I thought you would say that.”

Did you create the work especially for this show, or did you already have it done?

I had started the work, but a couple of things happened between. I sent [the JEA] some pictures of my work, and they wrote me back and said, “We’d love to have you.” I was like, “Oh wow, great!” We set a date, and then I panicked because it was a little faster than I expected. My schedule and time frame changed. I was glad I had started some of the paintings. I just said, “Well, I can’t be all over the board, let me continue one thought process.”

At first, when I thought I would have more time, I was considering maybe two or three concepts [for the show]. One was the water, but to me, water goes hand in hand with the mangroves. They can’t grow without the water. Those things go together.

At first, people were calling it all other trees, which, I’m okay with that—that’s fine. But I remember the first time I showed a piece, last year at the tree show at Location, this one stood out. All the other pieces were more attuned to the color scheme of here, and this one stood out. I remember Peter [Roberts] said, “That’s a good thing,” and I walked away going, “Eeee, is it?” 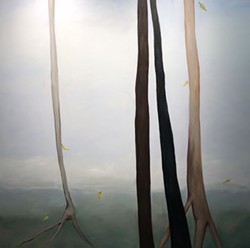 At first I was concerned because I wasn’t blending in. At the same time, you realize you don’t want to blend in, but it’s the first time you showed up to the party, and you’re the one with the fluorescent yellow hair.

I wonder if the reason you felt that way is because we don’t have mangrove trees here, and art buyers tend to buy what’s familiar to them.

But if you were from Florida, you would recognize these are mangroves. The mangroves were literally in my backyard. That was really neat.

Miami is a very congested place, so to be able to go into this world and feel like you were away from it all, it was in many ways pristine. You felt really special to be able to see those things. It didn’t occur to me that there were certain dangers to it.

Tell me more about the development of the exhibition.

I was not having good luck doing this. This is something I wanted to do back in Miami, and I couldn’t do it. I’m an artist who made a living as a journalist, so I didn’t have much time to do the full art thing. But I did participate in shows and did commissions. I never let go of the art. That was always there.

I never left the art, but at the same time, I was having a hard time getting down and doing all of this. It wasn’t until I started here in Savannah that I was able to spit it all out. It’s not done yet. I’m ready to move on to some other things, but it was really interesting that I had to leave it to be able to start expressing it. Maybe it’s because I wanted to record what I didn’t have in front of me anymore.

How did you come up with the title?

The title of the show, “Rooted,” has a lot to do about where you’re from. Very much your background, your heritage. It goes off to another place, too. Rooted on the personal level is a little transient and growing at the same time. The root is who you are, where you’re from, and where you’re going and how you change. That’s where the mangrove roots go—they’re always hopping.