The Standbys chronicles an uncertain role in professional theater 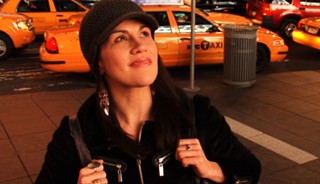 Actress Aileen Watters in a scene from "The Standbys."

Disclaimer: The documentary film The Standbys, which is being screened Wednesday, July 23 at Muse Arts Warehouse, probably won't appeal to you if you aren't involved in theater or don't absolutely love musical theater in some way, shape or form.

However, all you “theater people,” be advised: Run, don’t walk to this special one-time screening, set up through the auspices of the Savannah Summer Theatre Institute. Filmmaker Stephanie Riggs—who studied directing for the stage at Carnegie Mellon before going into movie work—has brilliantly captured the joy and heartbreak of what it’s like to play second-string on Broadway.

The Standbys follows actor/singers Merwin Foard, Alena Watters and Ben Crawford, who work as “standbys” for A-list performers. They have to be at the theater for every single performance, fully rehearsed and in makeup and costume, and be ready to “go on” at a moment’s notice should something unfortunate happen to the lead.

Ninety-nine percent of the time, they stay backstage, twiddling their thumbs. Just waiting for that big break.

They’re not understudys. An understudy is usually already in the show, as part of the ensemble, and is required to tackle a role if enough notice is given.

Tiny spoiler time. In the film, Foard fills in for an ailing Nathan Lane in The Addams Family, and Watters ... well, her story is one you really need to see for yourself.

“I think it’s Alena that says ‘One minute you’re on Broadway, the next minute you’re homeless,’” Riggs says. “You put your heart and soul into it every night. But if you’re in a Broadway show that closes, suddenly you are nothing.”

Riggs will be at the screening and conduct a Q&A following the film. We caught up with her this week for a little chat.

“I went to see a little black box show, where understudies and standbys perform. They get the chance to do the songs that they don’t get to do because they’re sitting backstage. And their voices were incredible! They were so phenomenal. And then they would tell these stories; the stories were horrific. Getting thrown onstage in front of thousands of people without a single rehearsal. Or their toes almost getting chopped off by automated scenery, because they didn’t know they were in the wrong spot. The contrast between these amazing voices and these horrific stories, I was like ‘Somebody has got to put a spotlight on these guys that are back in the shadows.’”

“I said ‘Let’s get an ingénue, who we can see the beauty and the glory of Broadway through their eyes.’ That ended up being Alena, as she was pursuing her dream. I wanted to contrast that with a professional, somebody that had been doing the standby/understudy gig for years. I met Merwyn, and he has, at this point I think more Broadway standby credits than anybody else that’s been on Broadway. He’s been doing it for 25, 30 years now. And then to make sure something actually happened in the film, I wanted to find somebody in the second act of their story. And that was Ben. Because he was about to take over the role in Shrek.”

“Ben Wolfe, who runs the Savannah Summer Theatre Institute, came to a screening in New York. We started talking afterwards. And I don’t know if it’s me being from Georgia ... I hit it off immediately with him. He said ‘I do this thing .....’ and I said absolutely, let’s talk. I would love to get back down south. I talked to my distributor and they liked the idea that we could do something for the students, but also make it more open to the Savannah public. And so this is what Ben put together, and I think he’s done a great job.”