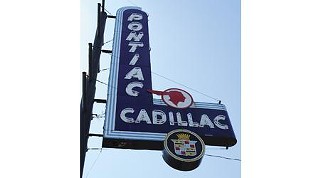 In hindsight, the September 30 closing of Backus Cadillac is hardly surprising. Known for generations as Backus Cadillac Pontiac, the auto dealership on East Victory Drive dropped part of its name earlier this year, when General Motors (GM) phased out the Pontiac brand during bankruptcy restructuring. Almost at once, the number of vehicles on Backus's new and pre-owned sales lots dwindled. By mid-September it seemed that fewer than a dozen cars remained.

Despite the warning signs, Savannahians seemed caught off guard, as well as saddened, by last week's closing of the family-owned business, open since December 1955. The final nail in Backus's coffin was GM's decision not to renew the dealership's Cadillac franchise agreement.

As the news spread late Wednesday, Facebook postings popped up with memories of the dealership and condolences to Backus's employees: recollections of the pink-stucco, glass and neon building; the partially hidden 50's era Pontiac-Cadillac blue, red and white sign; and the "O' Backus" St. Patrick's Day TV ads from decades ago.

Burned into my brain since childhood is their longtime advertising slogan, emblazened on their temporary dealer tags: "Backus Traded MY Way." Back in the day, "trade" was old-Savannah slang for "shop," so even new-car buyers "traded" at Backus.

"We knew Friday that Wednesday was going to be our last day," said Chris Mooney, a Backus sales consultant for 21 years.

"Sonny Dixon did a news thing on WTOC Wednesday night," said Mooney. "The news broke at 6:12 and at 6:13 my phone started ringing and it hasn't stopped."

Since the economic recession started, many Savannah businesses have closed or cut staff. Backus wasn't the largest or the oldest affected. When Great Dane Trailers closed its Savannah plant in January, nearly 300 people lost their jobs. That plant was founded in 1919; Backus was a kid by comparison.

In local economic data, Backus's demise will hardly be noticed. It's likely that the 20 or so staff still there at the end will soon find other work, or retire. Within weeks, GM is expected to award the Cadillac franchise to another local dealer, which could easily generate a few new hires, rendering the overall Savannah employment picture mostly unchanged.

Yet, along with Backus's closing goes a personalized way of doing business that's growing rarer in every industry, especially auto sales. In an era of giant car lots covered with rows of identical vehicles, online-only car companies, screaming TV ads repeated at every commercial break, and twenty-foot-tall inflated advertising gimmicks announcing great deals to passing drivers, the Backus sales approach remained understated and old-school, with a focus on service and relationship-building.

Mooney spent his last day at Backus calling his longtime customers-not trying to sell the last few cars, but breaking the news to them himself, and thanking them for their business.

"Backus had such a loyal following. I had a customer tell me once, ‘I really want that new BMW but if I don't buy from [Backus] I'm going to feel like I'm cheating on my wife.'"

That people-first approach was established by the late George Backus, the out-front customer guy in the family. George's wife Marie worked behind the scenes with a sharp eye on the bottom line.

Despite his gentleman's tactics, George was a salesman first, Mooney noted. "He'd say, ‘Take that car out to Mrs. So and So to test drive it.' I'd say, ‘But Mr. Backus, she doesn't like that car.' ‘Well, just tell her to drive it until she learns to like it!' "

The Backus's fingerprints remain everywhere in the community, from the George and Marie Backus Children's Hospital to the George Backus Memorial Golf Tournament, to the Matthew Reardon Center, founded by Kim Backus Reardon to provide education for children with neurodevelopmental disabilities.

And then there's that canary yellow 1976 Eldorado, on display in the glass-walled showroom for over 33 years.

"It was the last '76 convertible delivered to Backus Cadillac," said Sales Manager John Bunker in an interview earlier this year. "They said they weren't going to make any more so the company bought the car. It was never sold." Each year since, the Eldorado has been the lead car in the St. Patrick's Day parade, with appearances in a few other parades.

Mooney reports that the dealership tried to donate the Eldorado to the St. Patrick's Day Parade Committee, but liability and maintenance issues prevented that from happening.

That's when a local business leader purchased the car, so that it will continue to drive in the parade, in keeping with community tradition. It sounds like he traded the Backus way.