Bands on the run

The No Control Festival is an all-day, all-ages, all fun affair 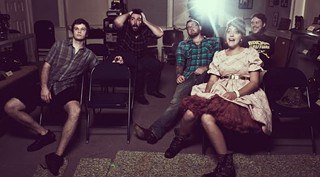 Say bye-bye to The Shaniqua Brown

Step right up, ladies and gentlemen and everybody in between. Saturday’s No Control Festival is your one–stop shopping center for performances by many of Savannah’s finest – and busiest – indie bands. All together, in one space.

Plus a great many of their talented friends.

The event, which Connect Savannah is thrilled to help sponsor, is being organized by the three members of Cusses, whose just–released debut album is causing quite a stir.

“We knew all year that we wanted to do a really big concert event,” says singer Angel Bond, “celebrating all the people that have believed in us and have supported us in this community.

“And all the bands on the bill are bands that we have played with several times, that have showed us a lot of love in other cities. And local bands that have supported us in our little No Control venue.”

No Control is Cusses’ former practice space, on E. 40th St., which they’ve been using to bring in a whole boatload of southeastern bands for house concerts.

Saturday’s festival, at Southern Pine Company, is Cusses’ attempt at paying it forward. Adds Bond: “Music is a community, it’s a family, and so we want to let the whole of Savannah come and enjoy it – the people that we love doing what they do best.”

The No Control Festival is an all–ages event, which means that although alcohol will be available — along with food — those under 21 will not be barred from the door, the way it is in Savannah’s bars. Several of these acts, Cusses included, have rarely been seen by those who couldn’t legally get into a nightclub.

Cusses are playing a relatively early set, Bond explains, “for the underage people that never get to see us, particularly Bryan Harder’s kids.”

(Harder, the band’s guitarist, has two small children who’ve never really understood what Daddy does in the evenings.)

“It’s not just the music,” explains Cusses drummer Brian Lackey. “We’ve got Primary Art Supply doing things for kids, a couple of Harlem Globetrotters who live here in town are gonna be shooting hoops, there are skate ramps, music tents for kids, bouncy balls for kids. We’re going to run the whole gamut, from noon till 4 a.m. And I think the gamut will get older as the night gets older.”

The Shaniqua Brown: This will be the final Savannah show for the Charleston–based funk ‘n’ fun quintet. “I’m ready to move on, man,” says lead singer Rachael Kate Gillon, who reports she has a “new project” in the works. “I guess my heart wasn’t in it as much any more, with this band. Although I love those boys and all, it just wasn’t necessarily what I wanted to pursue for the rest of my life.”

Today the Moon Tomorrow the Sun: A perennial fave in the SAV, Lauren, Micah, Cregg and Jeremy (from Atlanta) are sorta like the ABBA of electro dance/pop, with great tunes and a very hard edge.

Baby Baby: Some of the biggest buzz coming out of Hot ‘Lanta this year has been coming from this funky, punky party band, which has as much Ohio Players in its blood as Chili Peppers.

General Oglethorpe and the Panhandlers: Savannah’s quirky pop gang is now a quintet, with classically–trained Daniel Wilson on keyboards and Crystina Parker playing bass. “We’re kicking off 2012 pretty grandly,” says accordion player, songwriter and vocalist Anna Chandler. “We actually have a new EP, North of the River, a single and a tour coming up in the next two months.”

Heyrocco: Charleston’s three–piece heavy rock/experimental band tore it up during a recent debut Savannah gig at No Control.

Manray: Another Athens import, brothers Ryan, Jordan and Derek Olivera, with Gene Woolfolk, are known for proggy time signature changes. “Our music is always weird to describe,” the band explains. “It is rooted in a lot of the progressive music of years gone by, like Yes, King Crimson and Pink Floyd . . . kind of. But we also have a really straight forward side that appreciates good parts, hooks, and structure, unlike a lot of the ‘math–rock’ bands we are often grouped in with . . . kind of.”

Whaleboat: The Savannah band bio reads, in part: “Whaleboat’s blend of reverb drenched melody, southerngazed distorted guitars, & precise tidal drumming will draw comparisons to Radiohead, My Bloody Valentine and The Cure.” Jeremiah, Paul and Brent make atmospheric music with titles like “Sea’s Crashing,” “Fluke” and “Whaling,” with an EP due any day now. This is a band to watch.

When: Starts at noon Saturday, Feb. 18

A portion of the proceeds donated to Harambee House

No outside alcohol, no backpacks please

1-1:40 p.m.: General Oglethorpe and the Panhandlers