WHEN YOU think of drinks and Italy it’s likely you don’t think of anything except wine. That view is both understandable and accurate. In 2015 Italy produced just under 50 million hectoliters of wine, that’s about 1360 million gallons, or 4.25 gallons per U.S. citizen.

According to the Beverage Information Group, Italy provides a third of all wine, making it the largest producer of wine in the world.

Early Italian beers were nothing like the brews we know today. The residues found in the Etruscan vessels included ingredients such as Italian gentian root and Ethiopian myrrh resin.

We also know the Romans enjoyed a pint from time to time but the preference, like today, was for wine. That changes in 85 A.D., the year Gnaeus Julius Agricola returned to Rome. 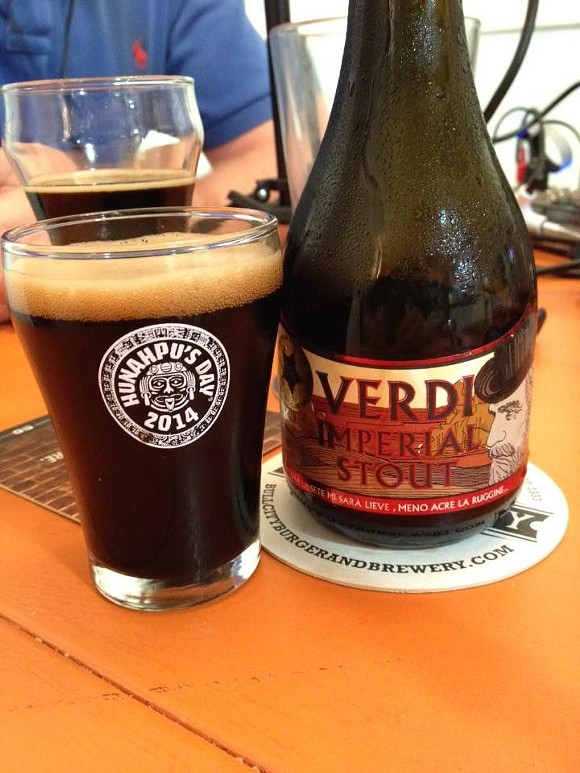 Agricola was a French born general and later governor of Britain. Agricola was a very powerful governor; having conquered much of Britain and some think even began the Roman exploration Ireland. According to the Roman historian Tacitus, also Agricola’s son in law, beer was the favored drink of the Governor.

He learned to love the drink in Britain where wine was a rarity but beer was readily available. Agricola brought his love of beer and the British techniques to make it when he was recalled to Rome by Emperor Domitian who, Tacitus tells us, thought Agricola was becoming too powerful.

Perhaps Domitian was correct because Agricola’s popularity spurred a short-lived resurgence in the interest of beer.

Beer pops up elesewhere in Italian history from time to time. Beer is referred to as “barley wine” in Florentine texts and there are records that beer was served at Duke of Milan Ludivico Sforza’s wedding.

This note about the Sforza wedding is particularly interesting because the celebration was orchestrated by none other than Leonardo DaVinci.

There is some controversy about what the first “official” Italian brewery was but whether is was Spluga Brewery or Wührer Brewery both opened in the mid 1800’s.

Craft beer production in Italy is very new, having only really started in 1996. Some of the these small breweries have made some progress in their wine centered home. Perfection is synonymous with craft in Italy so what is there tends to be very good.

In fact, many Italian breweries have, naturally, taken a cue from the wine industry. Most wine drinkers are familiar with the concept of “terroir,” the idea that the local environment, soil and climate influence the overall character of a wine.

Italian brewers have taken this concept and run with it. Breweries have use locally sourced additives such as spices or fruit. This is nothing new for American breweries, but while this practice is used in the U.S. most often for one off or “special” beers, in Italy it’s seen as a natural progression from wine and almost a mandate.

Each brewery, and their beers, takes on characteristics of the local agriculture: citrus in the south, chestnuts from near Naples, and of course grape must, the stuff left over from wine production, and grape born yeasts are common.

Locally there are a few options if you want to have a craft beer tour of Italy. Two of the largest and most readily available are the two breweries that started the craft beer movement in Italy, Birra Baladin and Birrifico Italiano. Both of these northern Italian breweries were started by home brewers, influenced by German and Belgian beers they found during travels.

Now, there are over 600 craft breweries in Italy. Of course not all of these are available in the U.S. and when you do find Italian craft beers they tend, thanks to Italian export taxes, toward the expensive. But the creativity behind these beers make them worth the investment. Her are a few to look for.

Peroni Nastro Azzurro, Birra Peroni: Ok I know this isn’t a craft beer and they are owned by Miller but I have reasons for putting this on the list. The one place in Italy that beer is completely acceptable to drink, and maybe even preferable to wine is the pizzeria. Italian lagers tend to be richer in flavor than their American counterparts so a Peroni, especially with pizza, is worth a try. Besides Nastro Azzurro is Italian for blue ribbon so it’s the equivalent of hipster favorite PBR.

Duchessa, Birra del Borgo: Located not to far from Rome, Birra Del Borgo produces several farmhouse style ales of which Duchessa is one. Birra del Borgo is one of the breweries that worked with Dogfish Head to produce Birra Etrusca, a project which also yielded the collaboration beer My Antonia. Del Borgo was recently purchased by AB InBev, the Belgian based mega corporation also known as Budweiser, so some may see this as a reason to stray away form them. Others see it as an opportunity to have easier access to del Borgo beers.

Wayan, Birra Baladin: As mentioned, Birra Baladin was one of the forerunners of Italian craft beer and was heavily influenced by Belgian beers. Wayan is a great example of this early direction. Baladin has now grown to include numerous styles and even a line of fantastic sodas. Harder to find but worth seeking out is Baaldin’s barley wine, Xyauyù. Xyauyù comes in several variations, each with a different take on a traditional Italian flavor or aged in a different style wine barrel. They can be intense but are rich in flavor.

La Luna Rossa, Birrifico Del Ducato: Readily available at local craft beer bottle shops, Ducato beers are easily recognizable as they are found in what looks like small wine bottles. La Luna Rossa is a great example of a sour, a style very popular in Italy. Also worth hunting down is Verdi Imperial Stout, considered by some to be the best beer produced in Italy. It’s a chili spiced imperial stout similar to Westbrook Mexican Cake or Cigar City Hunahpu’s.