Basically Nancy: Three of a kind

BASICALLY NANCY’s "GenNext" show at Savannah Stopover this past March was a huge crowd hit and local social media sensation.

The rock trio of female local artists was formed just last year by Alayna Bowen, Esther Hines, and Greta Schroeder. The group of seniors from Savannah Arts Academy radiates talent through their rock and indie tunes played all over town.

Their success has only continued growing since they played their first show at Graveface Records last year. They will be performing next at El-Rocko Lounge on Tuesday April 23 at 9 p.m. 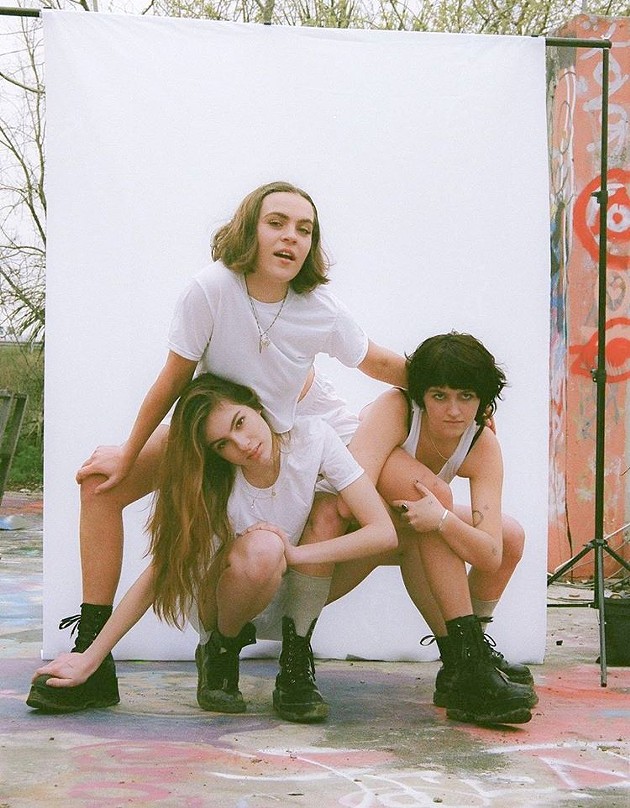 We spoke to Basically Nancy this week.

Where did the name first come from?

Esther: It came from Greta; she used to have this old neighbor named Nancy. She used to come over and go to her house growing up. It’s also a play on words, which represents being girly, and almost prudish, which our music can then contrast. Around last spring I got a drum kit for my 17th birthday and then even before my birthday, we had already decided we were forming a band.

How did you each start with music?

Esther: I started with music earlier this year when I got a drum kit for my birthday, but my dad has been a musician his whole life playing with major bands when he was younger. I was always envious of the stories he told, so I wanted to be a part of something similar.

Greta: I grew up with a lot of musicians in my family, so music has always been a really big part of growing up. I started taking piano lessons when I was 8 and hated it so I picked up guitar when I was around 15 and my dad taught me most of what I know.

Alayna: I’ve been taking piano classes since I was like 10 and then got a guitar for Christmas 2017 and from there just started practicing like crazy. Then Greta asked me if I wanted to start a band and I was like, hell yeah, but we needed a bassist and so I taught myself how to do that.

What’s your favorite song to play at shows?

Greta: Friendship Song and Fuck You Too.

Alayna: My favorite song to play is probably Feels Blind. It just feels so good and empowering to play.

Esther: My favorite song to play is Friendship Song or our cover of Bikini Kill’s Feels Blind.

What bands are you inspired by?

Esther: Our music style is inspired by bands like Bikini Kill, Sleater Kinney, and Hole. My personal influences range from bands like T. Rex, The Stooges, Television, and Joni Mitchell.

Greta: Riot grrrl bands like Bikini Kill, Sleater Kinney, and Heavens to Betsy. But a few of my favorites and personal influences are The Replacements, Neil Young, Dinosaur Jr., and Blondie.

Alayna: Like Esther and Greta said, the band is heavily just riot-grrrl inspired but my faves of all time are Violent Femmes and King Krule.

Where does your fashion sense come from?

Esther: My fashion sense is definitely derived from late ‘70s punk scene style and ‘90s grunge. It also comes from the music I listen to.

Alayna: My fashion sense is primarily whatever Greta and Esther tell me to wear before a show. Most of the clothes I own are thrifted.

Greta: My fashion sense is mainly influenced by the music I listen to. I really like vintage and try to shop mostly second hand. I like ‘90s clothes and the ‘60s a lot.

What kind of future do you guys see with music?

Greta:  I definitely think we are all going to pursue music in the future whether it's together as Basically Nancy or not.

Esther: Yeah, in the future, whether we’re separate or together, I think we definitely will pursue our music and art in some form.

Alayna: Basically Nancy will probably end when this summer ends because Greta is trying to leave, but I’ll be around Savannah for another year trying to essentially explore myself as an artist before I go to NYC to major in Contemporary Music.

Esther: Our favorite thing about playing  is definitely the support from our listeners. After our shows it’s always nice to meet new people that come out to see us. Savannah is definitely becoming a major music town and has a lot of amazing up and coming artists. It’s inspiring to see all these people so passionate about music who feel the way we do.