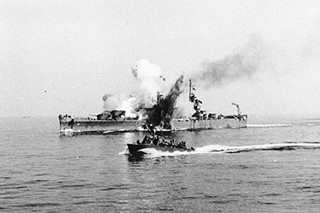 The direct hit on the USS Savannah was captured on film by war correspondents off the coast of Italy on September 11, 1943.

Where: Ships of the Sea Maritime Museum, 41 MLK Blvd.

This month marks the 70th anniversary of WWII's Battle of Salerno, and a new exhibit at the Ships of the Sea Maritime Museum brings the war home, literally.

Battle Voices is a collection of personal accounts and recently-acquired treasures that uncovers new depth of the events of Sept. 11, 1943 aboard the USS Savannah (CL-42), the light cruiser named for the Hostess City.

In the fall of that year, the war was in full swing as the Allies employed weapons from air, land and sea to fight the Nazis and its associate Axis countries. The U.S Army continued its drive along the coast of Italy, supported by the U.S. Navy's Southern Attack Force from the North Atlantic.

As part of the attack force, the Savannah had conducted patrols from Algiers to Brazil and destroyed enemy tanks on the shores of Sicily with its big guns.

But near the harbor of Salerno on Sept. 11, the mighty cruiser met a fiery fate: Using a technology that had not been witnessed before in warfare, the Germans dropped a radio-controlled Fritz X glide bomb from a plane 18,000 feet in the sky and guided it directly into the No. 3 gun turret of the Savannah.

The first explosion smashed through the hull and set off the ammunition stored in the lower decks. The ship continued to detonate on the inside for another thirty minutes, leaving a 60-foot gouge in her port side seam.

All in the front third of the hull — 197 sailors and nine officers — were killed by fire or smoke.

Incredibly, the remaining crew managed to put out the fires, seal off the flooding and stay afloat, and the ship arrived the next day in Malta under her own steam.

The episode remains significant to maritime history, and the staff of Ships of the Sea felt compelled to commemorate the anniversary of the dramatic battle. Though few of the survivors remain, their experiences that day continue to enthrall and inspire.

"I knew I didn't want to do a Wikipedia version," says Ships of the Sea curator Wendy Melton. "I wanted the firsthand accounts of what these guys went through."

Though the museum has several items related to the Savannah (including the ship's bell) in its archives, Melton wanted artifacts that revealed more about the experience aboard the ship during those excruciating hours. She trolled veteran's sites searching for photos and stories, and hit paydirt when she found Deborah Southward of Pittsfield, Illinois.

Southward is the daughter of Yeoman Warren H. Hahn, who kept the Savannah's log. She readily donated the "General Quarters Narrative" that her father brought home after the war.

Melton set to work preparing the narrative for viewing. As she turned the pages of the typed script, she realized that the best way for people to immerse themselves in this first-person account was to read it themselves. However, due to its delicate nature, repeated handling of the narrative would quickly destroy it. So Melton painstakingly reproduced the log, down to the purple mimeograph ink and distressed paper.

Visitors to the exhibit can now touch the words, experiencing the heightening panic onboard as it was written by Yeoman Hahn.

"I'm lucky as a curator that I get to hold this stuff, but most people have to see it from a case. This way, you can actually thumb through and read it," she explains.

Coupled with the fact-based data of the ship's log, Battle Voices presents a poignant look at the battle from within — as well as without: A team of war correspondents with cameras was present on the bay that day, and shots of the bomb exploding on the Savannah are incorporated in the short loop created by local filmmaker Michael Jordan playing on a monitor in the corner.

The exhibit is installed on the second floor near the magnificently-crafted model of the Savannah (already part of the museum's permanent collection) and can be viewed through Dec. 31.

Also on display is the silver tea service that was onboard the Savannah during the battle. Donated during its first visit to the Hostess City in 1938 by local schoolchildren who raised $1,500 (quite a sum back then!) to purchase it, the set currently belongs to the City of Savannah and may still be used on ships named Savannah.

Note: The 9,500-ton, 600-foot, USS Savannah (CL-42) is not to be confused with the decommissioned oil tanker USS Savannah (AOR-4) or the USS Savannah 1842, a frigate ironically used by the Union Army off the coast of Georgia during the Civil War. (The "CL" designates the kind of ship and "4" is its class. It's a Navy thing.)

After its tribulations in Italy, the cruiser Savannah was quickly repaired and went on to transport President Roosevelt for peace talks with Winston Churchill and Joseph Stalin. It served until the last days of WWII and was deemed a "magic carpet" for its use in bringing soldiers home from Europe after the war. After a respectable post-war career as a training ship, the USS Savannah (CL-42) was decommissioned and sold for scrap in 1960.

For those who served aboard, however, those few intense hours off the coast of Salerno, Italy held the most magnitude, a historical relevance conveyed in the new exhibit.

"What these crew members went through, it's part of the city's history," affirms Melton. "I wanted to recognize that."